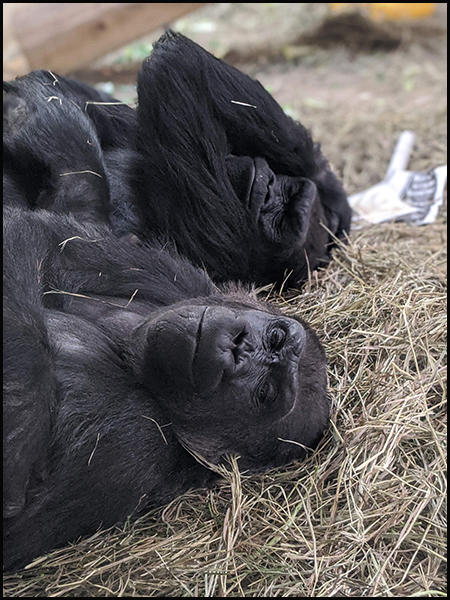 Cheyenne Mountain Zoo is home to five Western lowland gorillas. Within the group, the gorillas have unique individual relationships, but Juju and Roxie, our eldest and closely-bonded longtime residents, are especially tight knit. They’ve both surpassed the 39-year median life expectancy for females of their species in human care, with Roxie at 44 and Juju at 40. Both ladies have experienced periodic medical issues, but overall have been in relatively good health for their ages until recently.

In 2019, Roxie’s care team placed her on long-term hospice care for ongoing kidney, reproductive system and gastrointestinal issues. This means they decided it is in Roxie’s best interest not to go to heroics to help Roxie recover from another severe episode. They would, however, continue to provide supportive care. If she needs it, they could administer IV fluids and nutrition, if she has another phase of not eating and drinking. Since making that decision, Roxie’s keepers say she has had the longest stretch in good health they can remember.

Juju has experienced short phases of physical discomfort. The cause of her discomfort has yet to be diagnosed, but her symptoms are now presenting more severely than they have previously.

“We’ve seen Juju spending more time wanting to be away from the group and being less energetic,” said Carrie Supino, Primate World keeper and Juju’s primary trainer. “We’re also seeing signs that her left leg is uncomfortable. She hasn’t been sitting cross-legged like she normally does, which leads us to believe that’s a main source of her pain.” 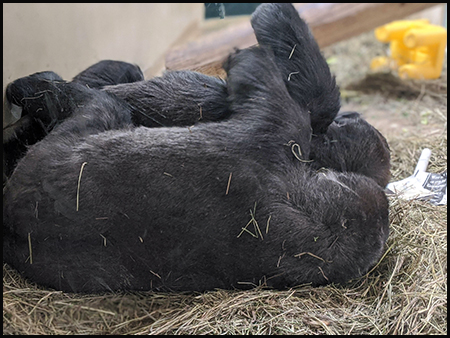 Typically, Juju’s discomfort occurs once or twice per year and can be corrected in a matter of days with pain and anti-inflammatory medications. But, in mid-July, she started showing signs that this episode is more severe. Oral pain and anti-inflammatory medications, which have worked in the past, are not bringing Juju the relief she needs this time.

At this point, the team has exhausted all voluntary diagnostic and treatment options, so they’re planning an immobilization for Juju in early August 2021. Under anesthesia, the team can safely get hands-on with Juju to hopefully diagnose the cause of her discomfort and start effective treatments. There is always a risk when an animal goes under anesthesia, and that risk is higher for older animals, like Juju.

Juju’s team tracks quality-of-life markers that help them identify if and when they need to escalate her care, including her appetite, activity level, social interactions with other gorillas, mobility and interest in training and enrichment.

“Juju is overall in good health,” said Supino. “Other than these issues, she’s doing great. As a team, we think this immobilization is the best next step in helping Juju feel better.”

Roxie was born at CMZoo and Juju came to the Zoo in 1982. Keepers say they have been best friends from the time they met. 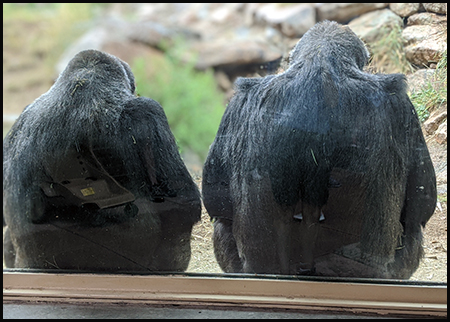 “We’ve seen them sitting next to each other watching the rest of the troop, like they’re two old ladies on a park bench,” said Supino. “They’ll even have little tickle fights and get playful together. Juju has a respect for Roxie, and vice versa, that seems to allow them to let their normal gorilla guard down around each other.”

Roxie is known as a tactile gorilla, who enjoys patting her troop mates on the rear, playfully wrestling, tickling and even cuddling with them. Juju is described as ‘the boss.’ With an athletic build and a lot of confidence, Juju isn’t one to back down from a challenge. Gorillas generally prefer to have their own space, but the special bond between these two is different. In the last couple of weeks, as Juju deals with health issues, keepers have seen how important they are to each other.

“Lately, Roxie never leaves her side,” said Supino. “Being as close as six feet for gorillas is considered an interaction that means they’re really comfortable together. There aren’t many other gorillas Juju will let sit close to her. For the past couple of weeks, wherever Juju is, Roxie is right there.”