Since Goma, our 29-year-old silverback Western lowland gorilla, came to Cheyenne Mountain Zoo in 2016, Primate World keepers have worked to socialize him with the four female gorillas who live at the Zoo. Each of the ladies has her own personality, which means Goma – who came to CMZoo without much experience living in a cohesive troop – has his work cut out for him. 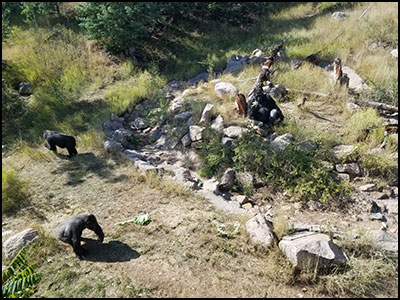 Roxie, 44, is playful and outgoing. Juju, 40, is direct and likes to push boundaries. Asha, 28, is the peacekeeper and has developed the best relationship with Goma, so far. Kwisha, 27, is confident and can have unpredictable moods. Thanks to the Primate World animal care team’s commitment and expertise with gorillas, the troop is making great progress.

Currently, Goma prefers to spend the night in his own area, but they come together for socialization most mornings. A cohesive gorilla troop will spend most of its time relaxing and foraging. So before socializations, their care team prepares their spaces with ample food and enrichment. Just like with humans, if there’s nothing to do during a potentially tense situation, things can get uncomfortable quickly.

“The last two and a half years, they had access to multiple indoor spaces and the yard during socializations,” said Dina Bredahl, senior lead keeper in Primate World. “But, this summer, we’ve seen them adjusting well to having just the outside space and one indoor space for a short time. That might not seem like a big deal, but seeing that they’re comfortable in close proximity means they’re developing communication skills and trusting relationships.”

Cooler temperatures mean big changes for the gorillas, because they won’t want to spend as much time outside for socializations. Recently, the keepers gave the gorillas the opportunity to try a new socialization setup indoors.

To avoid surprising Goma with the new scenario, keepers communicated with him and the females that this time was different.

“The first time we started the socialization indoors, there was an element of surprise because it was new,” said Amy Tuchman, Primate World keeper. “But, Goma caught on right away. The second day we did it, he was watching us and already knew what was about to happen. When the girls came in, he went to check them out and then went back to eating. It was great to see him really relaxed.

“Now, instead of asking them to go outside to see each other first thing in the morning, intros can happen comfortably indoors,” said Tuchman. “We wait for Goma to settle into the large indoor space, and then we open doors for the girls to join him in there.”

Preparing for days the gorillas won’t want to go outside because of the cold will be vital in setting the gorillas up for continued development as a cohesive troop. The gorillas are consistently showing their keepers they are ready for the next step.

“It used to be more tense with all five of the gorillas inside,” said Tuchman. “They weren’t necessarily aggressive, but they were watching each other and weren’t totally relaxed. Now, on most days, they have found a really good balance. Goma will still display sometimes, but now it seems like they’re communicating more effectively.”

When nearly-500-pound Goma displays, he usually sprints a short distance on all fours, sometimes throws an object or shoves a log, and then poses in a dominant stance with his chest pronounced. Silverbacks display for a multitude of reasons, including establishing dominance, protecting themselves or their troop from perceived threats, disrupting interactions between troop members, or changing a situation that makes them uncomfortable.

“Displaying isn’t always a bad thing, but Goma is still learning how to lead the troop,” said Tuchman. “If he displays to a point that makes the females uncomfortable, they might tell him, ‘That was too intense.’ The girls can be more reactive when communicating those boundaries with Goma. They’ll usually vocalize, band together, and chase Goma into another room. He has the right to tell them what to do and where to go, but he has to do it appropriately. He’s learned so much. I’m really proud of him.” 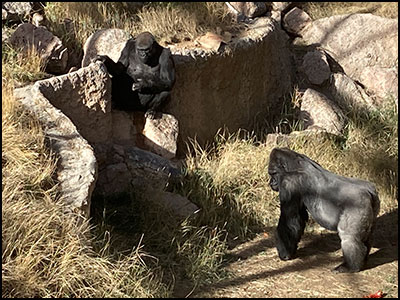 There are many factors the Primate World team considers when creating the best possible environment for gorilla socializations, including weather, relationships within the troop and the health of the individuals. If a member of the troop is ill, socializations are usually put on hold.

Last year, the troop’s resilience was tested when Roxie had a health scare. While she was treated and recovering, she was separated from the group. That could have been detrimental to the overall well-being of the group, but it wasn’t. Thankfully, Roxie’s health has been stable the last several months.

“Roxie is doing amazing,” said Bredahl. “It’s been years since she’s gone this long without an episode. When she’s been with Goma consistently, it seems like she does better! That could just be a coincidence, but it’s something I’ve noticed. She’s been on a new diet to help her gain weight and it could be coincidental that she’s feeling better, but she recently seems so happy and energetic. She’s running around with the girls and being her playful self. When she’s feeling good and sees us setting up to train with her, she gets excited and hugs herself. She has this awesome energy and kind of shimmies while she’s sitting down. It’s really fun to see.”

Roxie’s energy impacts Goma, too. Keepers have seen her scooting closer and closer to Goma until he tells her she’s too close. But outgoing Roxie keeps trying.

“When she’s getting into his personal space too much, he might stand up and purse his lips, or he’ll just give her a look,” said Bredahl. “She usually doesn’t listen at first, but he’s patient with her. She’s funny.”

Juju recently had a few days when she didn’t seem to be feeling well. She was lethargic and lost her appetite. Juju is normally physically fit and active, so when she doesn’t feel well, her keepers notice right away. After a few days of rest and monitoring, she returned to feeling well and socializations could continue. These situations and others are closely monitored by keeper and veterinary staff. Although they sometimes pause integrating the troop, CMZoo’s gorillas have overcome these challenges with flying colors.

“Over the winter months, we’re going to work hard to support their continued progress, whatever situations may arise,” said Bredahl. “We do a lot of looking back at what has worked, but it’s like our animal behavior manager, Rick, said, ‘These are different gorillas than we had last winter. They have different relationships and new skills, so we need to keep adjusting how we set them up for success.’ What was helpful last winter might not work this winter. We’re committed to helping Goma be successful as a member of this troop, and given what we’ve seen over the summer, we’re optimistic about what we can maintain for now and support even further over next spring and summer.”