CMZoo’s oldest male giraffe, Mahali, is dealing with progressive foot disease and suspected ligament injuries in his legs. The intelligent and confident ‘grandpa’ of the herd will be 18 years old on May 10. He has lived a good quality of life, well beyond the median life expectancy of male giraffe – 14.7 years – because of his dedicated team and their resources and expertise. 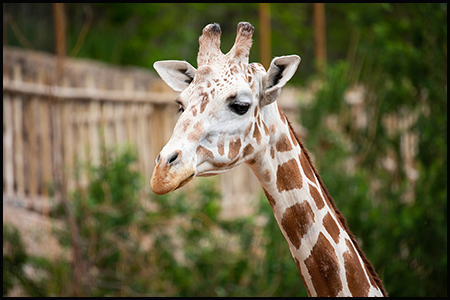 “Mahali has been dealing with leg and hoof issues for about five years, but because he’s received ongoing proactive and reactive care, he has been able to enjoy what we call ‘bonus years,’ in good health, after he’s recovered from periods of decline that he may not have survived otherwise,” said Dr. Liza Dadone, CMZoo vice president of mission and programs and a veterinarian specializing in mega vertebrates. Dr. Dadone has worked with Mahali for 11 years. “Unfortunately, he has started backsliding again recently. We’re watching how he responds to conservative treatments before we decide if he needs to go under anesthesia again.”

Anesthesia is risky for any animal, but is especially risky for larger animals, like giraffe. In 2017 and 2020, Mahali went under anesthesia to receive simultaneous treatments for his chronic foot and leg issues. Those risky procedures successfully helped him heal and return to a good quality of life.

Recently, Mahali started limping again, shifting his weight and hyperextending his wrists – which are halfway up a giraffe’s leg, and are often confused for their knees.

“His care team has been tracking Mahali’s quality of life with indicators that tell us if he needs additional care,” said Dr. Dadone. “Because he’s showing signs of discomfort relatively quickly after his treatment in 2020, we were more concerned this time around. But, after rest, pain management and topical treatments, he seems to be recovering. Still, we’re not out of the woods.”

Mahali has been resting in the barn for a few weeks with access to a sand bed that provides extra cushion for his 2,000-pound body. Giraffe don’t always lie down to sleep, but he’s been lying down in his sand bed regularly. He’s also on pain and anti-inflammatory medications and receives laser therapy. That care regimen has helped somewhat. Mahali is having mostly good days now, but his team is still watching him closely and listening to him when he shows them he’s not comfortable.
Recently, Mahali’s team asked him to participate in training so they could adhere a therapeutic shoe to his front right foot. During that session, he needed to hold his foot still while the glue set for two minutes. He stood steadily for about a minute and then decided to walk away.

“If you think about what we’re asking giraffe to do during a hoof care session – shifting weight off one leg then lifting it onto a hoof work block to bend and hold it so we can safely access it – you can see why they might tell us they don’t want to participate if it’s causing more pain,” said Dr. Dadone. “Mahali is normally a total rock star at hoof care training, but he’s been holding back, probably because it’s uncomfortable.”

“We were so close with Mahali, but he told us we were asking a lot of him lately with daily training for shoe placements and his treatments, so we respected that,” said Dr. Dadone. “Since that shoe fitting, perhaps because of treatments and rest, Mahali’s diagnostics show less inflammation in his right front leg. For now, we’re going to continue pain and inflammation management and keep a really close eye on him.” 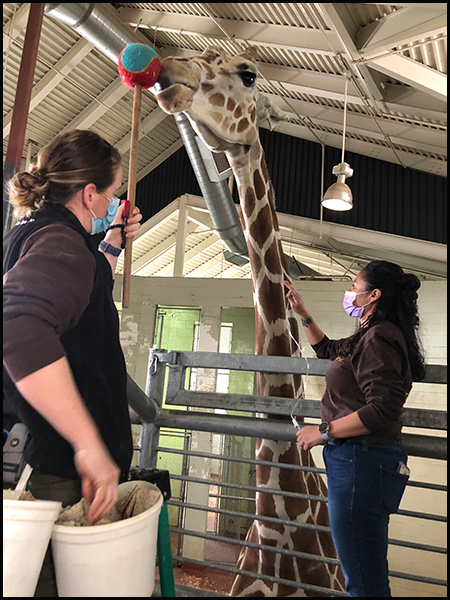 Another male giraffe, 11-year-old playful ‘uncle’ Mashama, who can often be found zooming around the yard with the younger giraffe, deals with similar issues. What the team continues to learn from Mahali’s case benefits Mashama, as they work to slow the progress of Mashama’s foot disease.
In early 2019, Mashama’s care team saw him limping after he stumbled during an especially playful day in the main yard. Initial x-rays revealed no significant damage, so his care team administered pain medications and moved him to a sand stall to let a perceived muscle strain heal with rest. After normally effective sand stall rest for Mashama, the team noticed he wasn’t improving as much as they would have liked to see, so they did more x-rays.

Those diagnostics revealed that he had developed a fracture in his right front foot. At that time, he participated in having a custom shoe adhered to help stabilize the foot fracture. Almost immediately, from the time the shoe was in place, Mashama appeared to be putting more weight on his right front foot, indicating he was much more comfortable. He has been steadily comfortable since beginning treatments in 2019.

Because of Mashama’s inspiring relationship with his primary trainer, Amy, he seems to love training. That enthusiasm allows his team to try treatments that would only be possible for a giraffe under anesthesia.

Three times since his injury – which will likely never fully heal – he has received stem cell therapy, which is intravenously administered into the jugular vein in his neck. The treatment requires him to stand relatively still to receive the large volume of cold injection for about five minutes. Mashama willingly stands, with every opportunity to walk away, while Amy holds his attention at his target stick – a long, wooden stick with a giant tennis ball on the end, which the giraffe are trained to touch with their noses for rewards – and bucketloads of his favorite treat: rye crackers. Mashama is the only giraffe known in AZA circles to have received stem cell therapy voluntarily.

Although Mashama isn’t currently declining, he seems to be on the same trajectory as Mahali. He received his third dose of stem cells on April 21, 2021, as a sort of ‘booster’ after his other two treatments.

Stem cell therapy is still largely experimental, and because it is often administered in conjunction with a variety of other treatments to take advantage of precious time under anesthesia, its efficacy is difficult to document. Mashama’s ongoing stem cell treatments could be an indication of their success treating soft tissue injuries and inflammation, and could lead to the wider acceptance of the treatment, making the therapy an option for more animals with similar issues.

We will continue to keep you updated on Mahali’s condition and treatment options, and Mashama’s ongoing trailblazer status as a voluntary recipient of innovative therapies.