Eight-year-old Savelii joins CMZoo from Bramble Park Zoo, in Watertown, South Dakota. In September, the plan was for nine-year-old CMZoo male Amur tiger, Thimbu, to move to Bramble Park Zoo. Since then, plans have changed, and Thimbu has a recommended breeding match. He will instead move to Rosamond Gifford Zoo, in Syracuse, New York, in the next few weeks. Through the Species Survival Plan’s (SSP) management of Amur tigers in accredited Zoos, CMZoo four-year-old male Amur tiger, Chewy, was selected as a breeding match for Savelii and will remain at CMZoo for the foreseeable future.

Wildcats Conservation Alliance estimates there are only approximately 500 Amur tigers in the wild. They’re listed as endangered by the International Union for Conservation of Nature (IUCN). If breeding is successful between Savelii and Chewy, they would both become first-time parents and add to the assurance population of tigers in human care. 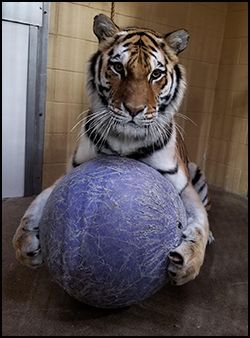 Savelii is about halfway through her routine quarantine period in the tiger building, behind the scenes. This time allows Savelii to adjust to her new surroundings and for Chewy to recognize her scent and presence, while Savelii clears exams and medical tests.

Savelii’s keepers at CMZoo say they’re optimistic about her, and she’s showing signs that she’s adjusting well. But, as with any new addition to the CMZoo family, there are a lot of milestones for her to reach before starting the introduction process with Chewy, like clearing quarantine, building trust with her keepers, getting familiar with her new exhibit and shifting areas, and training.

Savelii is already training with all of the Asian Highlands animal keepers, who are getting to know her personality.

“She likes to rub her face against the mesh, like a housecat does. She’s super ‘chuffy’ when we engage with her, which is a good sign,” Kristen Cox, Asian Highlands animal keeper said. (A ‘chuff’ is a quick outward breath, which is like an outgoing tiger greeting.) “She’s interested in Chewy’s presence. When we’re training with her and she hears Chewy or Thimbu chuffing or playing with enrichment in the dens nearby, she perks her ears up and turns her attention from us to listen to them.”

Savelii participated in training at her former zoo, which provided a strong foundation on which keepers are excited to build.

“We’re working on asking her to eat from tongs, which allows us to provide food rewards during training and helps her build trust with us. Next, we’ll ask her for a stand-up behavior, which allows us to get a good look at her feet and body to make sure everything looks healthy,” said Courtney Rogers, Asian Highlands keeper. “She’s great at the sitting and lying down training behaviors. Next, we plan to work on her voluntary injection training, which lets us provide vaccinations and other necessary medications in a low-stress way. She seems to be a quick learner so far.”

Savelii is smaller than Chewy, weighing in around 230 pounds compared to Chewy’s 360 pounds, which is a normal size difference between female and male tigers. She has beautiful almond-shaped eyes and a round face. Another way guests can distinguish Savelii from Chewy, when they visit the Zoo and see her on exhibit soon, is her shorter hair around her face and darker lines on her forehead.

When Savelii will be on exhibit for guests to see has not yet been determined. Chewy and Savelii will take turns accessing the yards and spaces separately. Sharing the same space at separate times allows them to become familiar with each other’s scents. 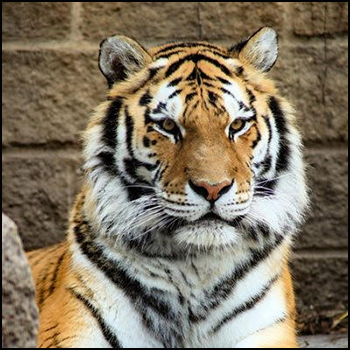 “The breeding recommendation is important and an ultimate goal, but we’re not going to rush into introducing them,” said Rogers. “We’ll pay attention to how confident they are with each other’s smells and how confident Savelii is getting with us, and we’ll go from there.”

During animal introductions, keepers follow the animals’ leads and observe behaviors that indicate that they’re comfortable and receptive with each other, or not. They start very cautiously by observing behaviors during ‘howdies,’ which are introductions with a barrier between the cats. ‘Howdies’ allow animals the opportunity to see, smell and investigate each other without the risk of potentially aggressive physical interactions.

“We prepare as much as possible, but we know from experience that big cats can be unpredictable, so we stay flexible during introductions,” said Rebecca Zwicker, Asian Highlands animal care manager. “We look for signs of interest or aggression between the cats during ‘howdies,’ and respond based on their interactions. That could mean we steadily increase the amount of access they have to each other. It could also mean we give them more time, but limit their access, to get used to each other.”

Having experienced a heartbreaking loss during a previous big cat breeding session, Cheyenne Mountain Zoo is fully aware of the dangerous scenarios it presents. CMZoo Amur tiger, Zoya, was killed by her mate in one such breeding session in 2016.

Since then, Cheyenne Mountain Zoo has not participated in tiger breeding. Now, as wild populations decline and the SSP’s past three years of efforts to breed Amur tigers prove unsuccessful, CMZoo has accepted the SSP’s recommendation to try again.

Although big cat breeding has proven to be risky, Cheyenne Mountain Zoo animal care and veterinary staff take all precautions possible. Ultimately, CMZoo acknowledges that the work to continue the existence of these species is so necessary that we want to try.

“Savelii and Chewy have valuable genes that will help ensure the genetic diversity of Amur tiger assurance populations in zoos, so we’re looking at lots of options about the best ways to get her and Chewy’s genes in the population,” said Rogers.

Many ask if artificial insemination (AI) is a better option for riskier breeding scenarios, like these. It can be a last-resort option, but isn’t historically successful with tigers because of the females’ unique ovulation patterns.

Female tigers are induced ovulators, which means the act of mating causes the female to release an egg for fertilization. It can take several days of mating interactions to stimulate ovulation and guarantee fertilization of the egg. Because of this, AI success in tigers has historically been very low; only three out of 60 procedures in the last 20 years have resulted in a cub. Even with the odds stacked against AI, CMZoo has collected samples from Chewy in case this last resort needs to be explored.

“For now, we’re focused on setting Savelii up for success,” said Rogers. “We see her confidence building and look forward to sharing her with everyone as soon as she’s ready.”

As Savelii makes progress at CMZoo, we will keep guests posted on social media and through The Waterhole monthly newsletter.