Every day of the year, conservation is at the center of the inspiration and work at Cheyenne Mountain Zoo. As 2018 comes to a close, we’re reflecting on some of CMZoo’s conservation contributions this year. We hope you’ll be inspired to take action, big or small, to join us in the important work of conserving endangered species for generations to come.

One way to support wildlife conservation (while learning a lot and having a great time) is by visiting the Zoo! Through CMZoo’s Quarters for Conservation program, guests contribute to conservation around the world, simply by visiting the Zoo. For each paid admission to the Zoo, 75¢ is directly allocated for conservation programs including safeguarding African vultures, rescuing frogs in Panama, protecting wild orangutans, restoring the population of black-footed ferrets, saving wild giraffe, increasing the population of endangered Wyoming toads and helping to protect African elephants and rhinoceroses. Each year, Quarters for Conservation allows Cheyenne Mountain Zoo to contribute $500,000 to these conservation efforts and more.

Learn more about Quarters for Conservation here and continue reading to learn about some of 2018’s conservation highlights.

Giraffe conservation was given a generous boost from many helping hands when Operation Twiga continued in 2018 with Operation Twiga III in Uganda. Cheyenne Mountain Zoo staff and other concerned conservationists took part in translocating endangered Nubian giraffe to a safer location, where they could establish new herds and maintain the important genetics of their subspecies. Additionally, the operation generated more critical health data which will feed research that helps conservationists understand disease management and threats facing all giraffe in the wild. 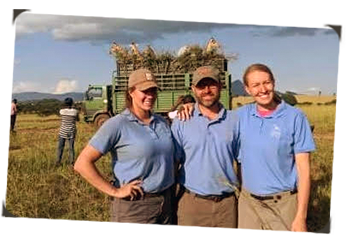 During Operation Twiga III, the team was able to capture and move a total of 14 giraffe from Murchison Falls National Park, where oil drilling is set to begin, to their new home in Kidepo Valley National Park.

Cheyenne Mountain Zoo’s Quarters for Conservation has allowed us to send more support to Tsavo Trust – a field-based non-profit organization in Africa that uses aerial surveillance and on-the-ground field efforts to protect wildlife in Tsavo National Park, the largest national park in Kenya. The organization was founded to help protect the last of the “big tuskers,” which are likely the last viable genetic pool of African elephants with tusks weighing more than 100 pounds each. The park is also home to a number of black rhino sanctuaries established by the Kenya Wildlife Service (KSW) and supported by the Zoological Society of London. The black rhino is critically endangered, due primarily to illegal poaching for their horns.

In partnership with the Kratt Foundation in August, CMZoo sent $53,333 to support ongoing anti-poaching aerial surveillance efforts, bringing the total contribution to $145,000. These funds also helped complete the construction of Tsavo Trust on-site staff housing. This donation means Tsavo Trust can continue to monitor and protect roughly 16,000 miles of land that is vital to the survival of these endangered species.

In mid-September, four kits and four adult black-footed ferrets (BFF) were moved to a preconditioning center outside of Fort Collins, Colo., where biologists observe the ferrets to ensure they can hunt, avoid predators and shelter themselves to survive without human intervention and continue to increase the endangered species’ population when they’re introduced into the wild.

Since the 1981 discovery of a small population of BFFs in Meeteetse, Wyoming, conservationists launched a black-footed ferret recovery plan which continues to increase the population. Numbers fluctuate, but recent reports estimate 350 BFFs are thriving in the wild, thanks to this program.

Palm oil is widely used in many products, ranging from food to cosmetics, but is grown in just a few countries throughout the world. This includes much of Indonesia and Malaysia, which are home to orangutans and other unique species. As the demand for palm oil has increased globally, Indonesia’s and Malaysia’s natural rainforest has decreased in size as a result of unsustainable slash-and-burn clearing to make way for more palm oil crops. This loss of habitat threatens the survival of many native species.

CMZoo is committed to educating the public about the use of sustainable palm oil, providing guidance about which companies are members of the Roundtable on Sustainable Palm Oil, which means they are committed to using sustainably produced palm oil in their products. In September, CMZoo’s palm oil team traveled to the Association of Zoos and Aquariums annual conference to share knowledge and resources. CMZoo’s palm oil app has been named as a reliable guide for information on sustainable palm oil in many publications and forums, including most recently by National Geographic.

Vulture conservation has been a focus at Cheyenne Mountain Zoo for nearly a decade, and while strides have been made toward protecting them, this critically important species still hovers on the brink of extinction. They need our help more than ever.

This year, the Association of Zoos & Aquariums voted to include African vultures as one of their SAFE (Saving Animals From Extinction) projects, thereby creating an opportunity for more united conservation efforts. Currently, 12 zoos across the country are committed to partnering with African conservation organizations in order to address the African vulture population crisis. As part of this group, Cheyenne Mountain Zoo supports Vulpro in their efforts to re-introduce African vultures to their wild habitat through one of our Quarters for Conservation legacy projects.

In addition, these birds have been part of our annual membership vote the past three years. We are proud to say that Cheyenne Mountain Zoo has donated nearly $67,000 to vulture conservation to date.

CMZoo made favorable strides in the management of endangered Wyoming toads in spring and early summer as CMZ experienced a robust egg-laying season, followed by the release of hundreds of year-old toads into the wild. Wyoming toads are currently listed as “extinct in the wild” by The IUCN Red List of Threatened Species.

Head-start toads develop from tadpoles hatched the previous year. This year’s breeding season at CMZ began June 4 when, after hibernating for 35 days, 11 pairs of adult Wyoming toads were put together in the breeding center. Nine of the pairs produced fertile egg strands, which included 14,822 eggs!

The work continues, as we grow our conservation programs and educate the public about how they can help support efforts to protect wild species.