June is an exciting time in the Laramie Basin of Wyoming. Every year, our dedicated team of conservationists travels at the crack of dawn to this special place to release toads they’ve been raising for a year, and tadpoles recently hatched at Cheyenne Mountain Zoo. Earlier this month, they released 220 ‘headstart’ toads and this week released 5,638 tadpoles into the basin’s waters, celebrating 25 years of saving this species once thought to be extinct. 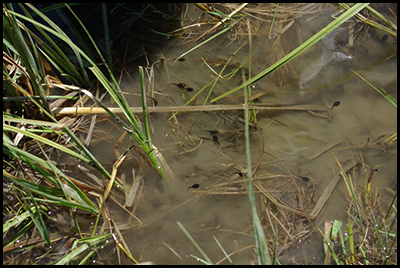 Why care about toads? They need our help. Amphibians are important members of their ecosystems. They’re also known as indicator species, which means they indicate the overall health of their habitat and its other residents.

“Toads and other amphibians play a vital role in the middle of the food chain,” said Jeff Baughman, CMZoo field conservation coordinator, who has been intimately involved in CMZoo’s role in the multi-zoo effort to help Wyoming toads recover since 2008. “They help control insect populations and feed larger animals, like birds, fish and mammals. Without toads, many species would go hungry and insects could get out of control, wreaking havoc on plant life and, in turn, waterways.”

Amphibians worldwide are facing mass extinction due to a pandemic known as the Chytrid fungus. Chytrid fungus causes a skin infection that hinders amphibians’ ability to breathe and absorb water. This often leads to organ failure and death. But, thanks to zoos like CMZoo, these hoppers stand a chance.

The yearly process begins by simulating hibernation for the toads. They’re placed in moss-lined containers inside a hibernaculum, which reduces their temperature slowly over a few days to 38 degrees Fahrenheit. The toads stay at that temperature for 35 days, receiving periodic checks from the conservation team who mist and monitor the sleeping beauties.

Over the final few days of their comfy freezer slumber party, the toads’ temperatures are slowly raised and they start to wake up. The cycle triggers their instinct to breed, as they would in the wild after winter, and that’s when the magic happens.

“We bring them out of the hibernaculum and place breeding pairs into tanks,” said Baughman. “We also play audio tracks from the Laramie Basin, which include Wyoming toad breeding calls, so the environment is just right. It only takes about a week for fertilized eggs to develop into tadpoles. We had 10 breeding pairs this year and nine of them laid egg strands.”

Some of the tadpoles born this year will stay at the Zoo, under the care of the conservation team, to grow into yearling toads before being released the following summer. The tadpoles held back get a yearlong head start at the Zoo, hence the term ‘headstart toads.’ Clean Chytrid fungus-free water, climate controls and plenty of crickets and cockroaches to eat in our safe conservation barn give them a better chance at surviving in the wild. Most importantly, it means there are more toads breeding in the wild because they will have survived and reached sexual maturity at a year old. 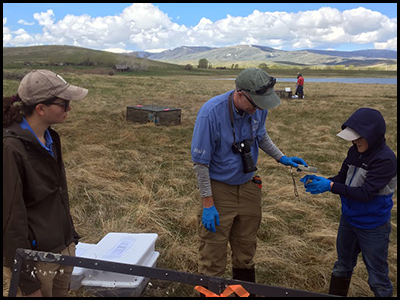 Over the next year, each toad is microchipped, so when the team goes back, they can track any trends that need to be addressed as breeding continues. The microchips also help the team identify and monitor individuals during their stay at CMZoo. Recognizing individuals with microchips also allows the team to appropriately administer hormones, which encourage them to breed once they’re freed.

Over this quarter-century commitment, CMZoo’s conservation team has released more than 40,000 tadpoles and nearly 1,400 toads into the wild.

“It’s a really fulfilling time of year, because we take care of these guys year-round so they can support their species,” said Baughman. “When we travel to Wyoming, see other toads in the wild and see this year’s headstart toads hop away into the wild, it makes our meticulous work all worth it.”

Toad lovers don’t need a hibernaculum and year-round dedication to help. Disinfecting outdoor recreation gear used in and near water can stop the spread of the deadly Chytrid fungus. Using a diluted bleach solution to clean fishing or kayaking gear, or leaving that gear in a hot car, will kill the fungus and prevent water enthusiasts from accidentally transferring it to another body of water.

Visiting the Zoo is another way to help. Every visit to CMZoo is conservation in action. Through CMZoo’s Quarters for Conservation program, by which 75¢ of every admission is dedicated to frontline conservation efforts like this, guests can enjoy a day on the mountain with their favorite animals and support important programs dedicated to saving wildlife and wild places. Since 2008, when Q4C started, CMZoo’s guests and members have contributed $3.4 million to conservation projects worldwide.