Cheyenne Mountain Zoo said goodbye to two rare and endangered animals on Thursday, shining an even brighter light on the gravity of many species’ situations on this planet. 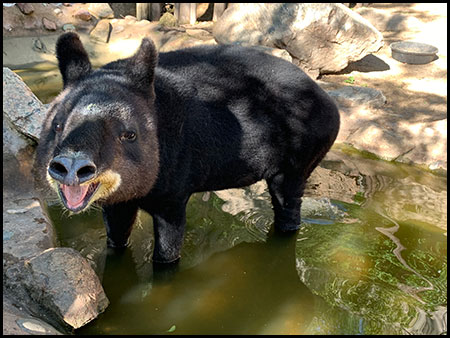 Cofan, a 19-year-old mountain tapir, and Luna, a 14-year-old Mexican wolf matriarch, passed away in unrelated situations, and the Zoo is pausing to honor their conservation contributions, while acknowledging the frightening future many species face. Both individuals were elderly and had experienced age-related conditions in recent years. Cofan was humanely euthanized after veterinary measures failed to revive him from a severe two-day downturn. Luna was found in her den, all signs pointing to a peaceful passing in her sleep.

With Cofan’s passing, there’s a literal empty space at the Zoo and figuratively in tapir fans’ hearts. The chance to ever see a mountain tapir up-close again is bleak, to say the least. Only four mountain tapir remain in human care in the United States, and they all live at Los Angeles Zoo. Unlike Luna, Cofan doesn’t leave a legacy of offspring to keep the species going.

In 2014, Cofan came to CMZoo as a breeding partner to Carlotta, a female mountain tapir who came to Cheyenne Mountain Zoo in 1995, and passed away in 2021. After years of attempts, including artificial insemination and natural breeding, it was determined that Carlotta was beyond her breeding years. The end was in sight at that point, but now having lost both of them, it’s right in front of us. 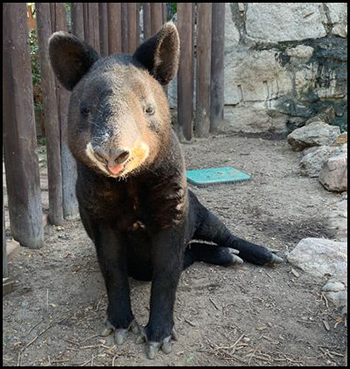 Because of the very low number of individuals in human care, both Carlotta’s and Cofan’s bodies have been donated to Denver Museum of Nature & Science for scientific study. Their losses provide a rare opportunity to further our knowledge of the species.

Countless people came to adore his wooly bear-like ears and prehensile snout. But is being adored enough? If an endangered animal isn’t contributing to the future of its species through offspring, what’s the point? Why keep trying when you feel like you’ve already tried everything? The point is… if animals are going to have a place in our future, humans have to make that place. Accredited zoos help people help animals.

Largely due to our member vote through our Quarters for Conservation program, CMZoo has contributed more than $135,000 to wild tapir conservation.

Mountain tapir need help, with an estimated 2,500 mountain tapir remaining in the wild habitats of their native Ecuador.

“Cofan was a sweetheart,” said Joanna Husby, animal care manager at CMZoo. “Every year on World Tapir Day, we’d invite the public to come right up to his fence and scratch his chin. People would travel from all over to meet him, and he always chose to stay right where we could give him scratches. He seemed to love his role as an ambassador, and I believe he inspired our members to support wild tapir conservation. Without Cofan and Carlotta, they would never have taken interest in those causes.” 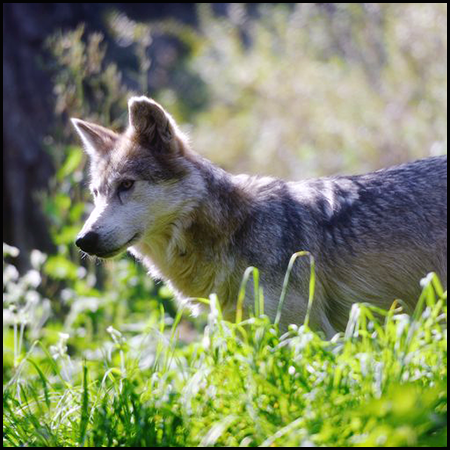 Guests had opportunities to get close to Cofan, and even touch him, but Luna was intentionally kept as wild as possible at the Zoo. Luna’s contributions to conservation were more literal.

She came to CMZoo in October 2016, followed by her mate, Navarro who arrived in November 2017. Their breeding recommendation was an instant match, and in May 2018, the two first-time parents welcomed the first litter of Mexican wolves born at the Zoo in 20 years.

The next spring, they welcomed another pup, later named Uno, and Luna embraced motherhood while inspiring human visitors with her gentle leadership, playful demeanor and up-close curiosity from behind the one-way glass in her habitat at the Zoo. Moreover, she taught her yearling pups how to parent by letting the older siblings closely observe her labor, birth and the upbringing of Uno in 2019.

Luna and Navarro had a lot of female pups. Five of her six total offspring are female, and two have already gone on to eventually form their own packs at different organizations that also participate in the Mexican Wolf Species Survival Plan (SSP) – a multi-organizational effort to breed Mexican wolves with maximum genetic diversity. The SSP works closely with the U.S. Fish & Wildlife Service to contribute to and diversify endangered wild populations through efforts like cross-fostering and wild release of pups and adults born in human care. U.S. Fish & Wildlife Service estimates there are only around 196 Mexican wolves in the wild in the U.S. 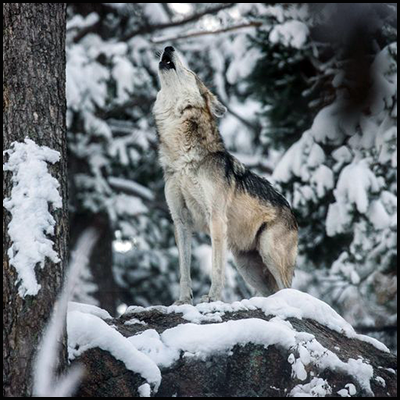 Despite their countless differences, Luna and Cofan shared important roles as ambassadors and contributors to their endangered species in the wild. As Zoo staff bid them farewell, we also hang on to hope that the work these animals allow us to do is actually making a difference for wildlife and wild places.

“We believe it is our job to be a place where people can care about and see some of the world’s most endangered species,” said Bob Chastain, president and CEO at CMZoo. “Further, because people come to the Zoo and support us through the conservation donation included with their admission, we get to make a difference for mountain tapir and gray wolves and many other species in the wild. And that’s my personal ‘why’ for why I continue to be dedicated to the work of CMZoo.”

Right now, decision makers in the state of Colorado are wrestling with the reintroduction plan for wolves to be restored to Colorado’s wild places. They’re taking public comments, and Luna’s legacy alone won’t save wild wolves. Humans have to take a stand for wildlife, and one easy step is making your voice heard at https://www.wolfengagementco.org/.