Most people who have been to Cheyenne Mountain Zoo have seen our African lions majestically gazing out over Colorado Springs from atop Pride Rock, or hanging out on the perches and heated floors in their Relaxation Room. Abuto, CMZoo’s 9-year-old African lion pride patriarch, is an amazing ambassador for his species, having formed countless connections with our guests and members.

Abuto came to CMZoo in 2013, around the same time African Rift Valley lead keeper, Amy Schilz, came to the Zoo.

“We’ve been working together since he was a year old,” said Schilz. “Right away we started working on behaviors and training that still help us take great care of him as he deals with ongoing health issues.”

About four years ago, he started showing signs of illness. He is usually really energetic and can be seen roaring, running around and enthusiastically participating in training and enrichment. At around five years old, he started having ‘off days,’ when he seemed lethargic, which led his team to investigate what was going on.

At the time, Abuto participated in a voluntary blood draw that revealed he was in the beginning stages of kidney disease. While investigating further, Abuto’s team also discovered he has high blood pressure.

His symptoms subsided for a while, but over the last few months, Abuto has started to show the same signs as before that he is having an ‘off day’ here and there, and maybe isn’t feeling well. CMZoo’s veterinary team and Abuto’s care team in African Rift Valley has been performing frequent voluntary blood draws and blood pressure tests with Abuto to see what’s preventing him from feeling his best.

“We are seeing some of his kidney values climbing higher, which is unfortunate,” said Schilz. “We’re doing the best we can for Abuto, but kidney disease is something that affects big cats and domestic cats often. We’re monitoring him closely, because the levels are higher than they have been in the past, and we want to do everything we can to prevent them from increasing further.”

Abuto’s blood tests have shown the progression of his disease over the years, most recently indicating a significant jump in levels. His team is working to adjust his treatments with hopes they can manage his symptoms in this next stage of the disease. 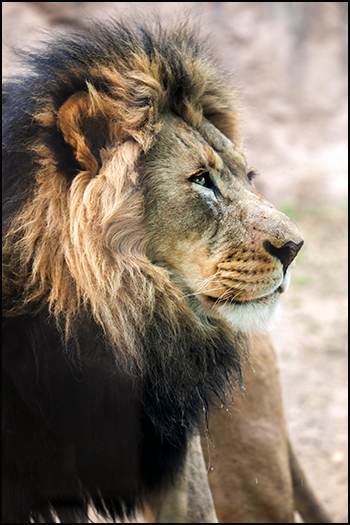 Abuto is the total package, from his gorgeous mane, to his impressive roars and his incredible intelligence. He, like most CMZoo animals, participates in voluntary training that allows his keepers to provide top-notch care for the 500-pound feline.

“He’s so smart,” said Schilz. “You can tell he likes participating in training. He gets really excited and runs over to train. He knows how to show us his mouth and teeth, so we can check on his dental health. He’ll also flop down on his side and show us his paws when we ask, so we can make sure he doesn’t have any cracks in his pads and his nails are a healthy length. He also voluntarily participates in blood draw training and blood pressure checks, so we can keep tabs on those long-term health issues he’s facing.”

How do you draw blood from a 500-pound lion? By asking him.

Abuto is trained to present his tail through a specially designed blood draw panel at the base of a training area by the Relaxation Room. During this training, his keepers open an access door for Abuto and leave it open, so he can choose to leave if he wants to. From the other side of the panel, Schilz, his primary trainer, asks him to enter the space and then cues him to adjust his body so his tail fits through the port. Abuto runs into the space and positions himself quickly, knowing he’s going to be engaging with Schilz and getting lots of rewards: tasty meatballs. Schilz sits on the other side of a protective barrier to Abuto’s left, while African Rift Valley keeper, Kayla Ringuette, and CMZoo veterinary technician, Brenda Cordova, sit behind fencing near his tail at the blood draw panel. They provide verbal cues, like, “touch” and “poke,” to let Abuto know they’re going to touch his tail and then draw blood. Abuto does the same behaviors for blood pressure tests, when he also presents his tail for the team to attach a quick-release blood pressure cuff.

“Abuto is just the absolute best,” said Schilz. “When we first see him in the mornings, he’ll make ‘baby calls’ like coos and little moans to us. He’s so chatty. It’s like he’s telling us all about his night. We’ve been working together for so long that he recognizes my voice. If he hears me laugh, even from the bottom of the hill, he’ll run over to see me. He’s so special to me, the team, our whole staff and so many of our guests. We’re making sure he’s getting the best possible care, and we are hopeful we can address these issues as they progress, just as we have helped him in the past.”

Keepers are tracking quality-of-life markers for Abuto, as they do for any animal with ongoing health conditions. Abuto’s keepers are tracking whether he shows any symptoms or behavioral changes, including lethargy, presenting a droopy jaw, has squinty eyes, or holds his head low – which could indicate he’s not feeling well. They’re also tracking whether he chooses to participate in training or perks up for keepers as he normally would. Along with blood tests, the long-term data will help his team adjust his treatments and make any future decisions necessary.

“Abuto is really special to us and has a huge piece of our hearts, so when he gets sick, we want to do everything we can to make him feel better,” said Schilz. “He’s in great hands with our vet team and our keeper team, and we know all of his fans will continue sending him well wishes for a quick turnaround.”

We will keep you posted on Abuto’s ongoing issues. Guests can visit him in African Rift Valley.