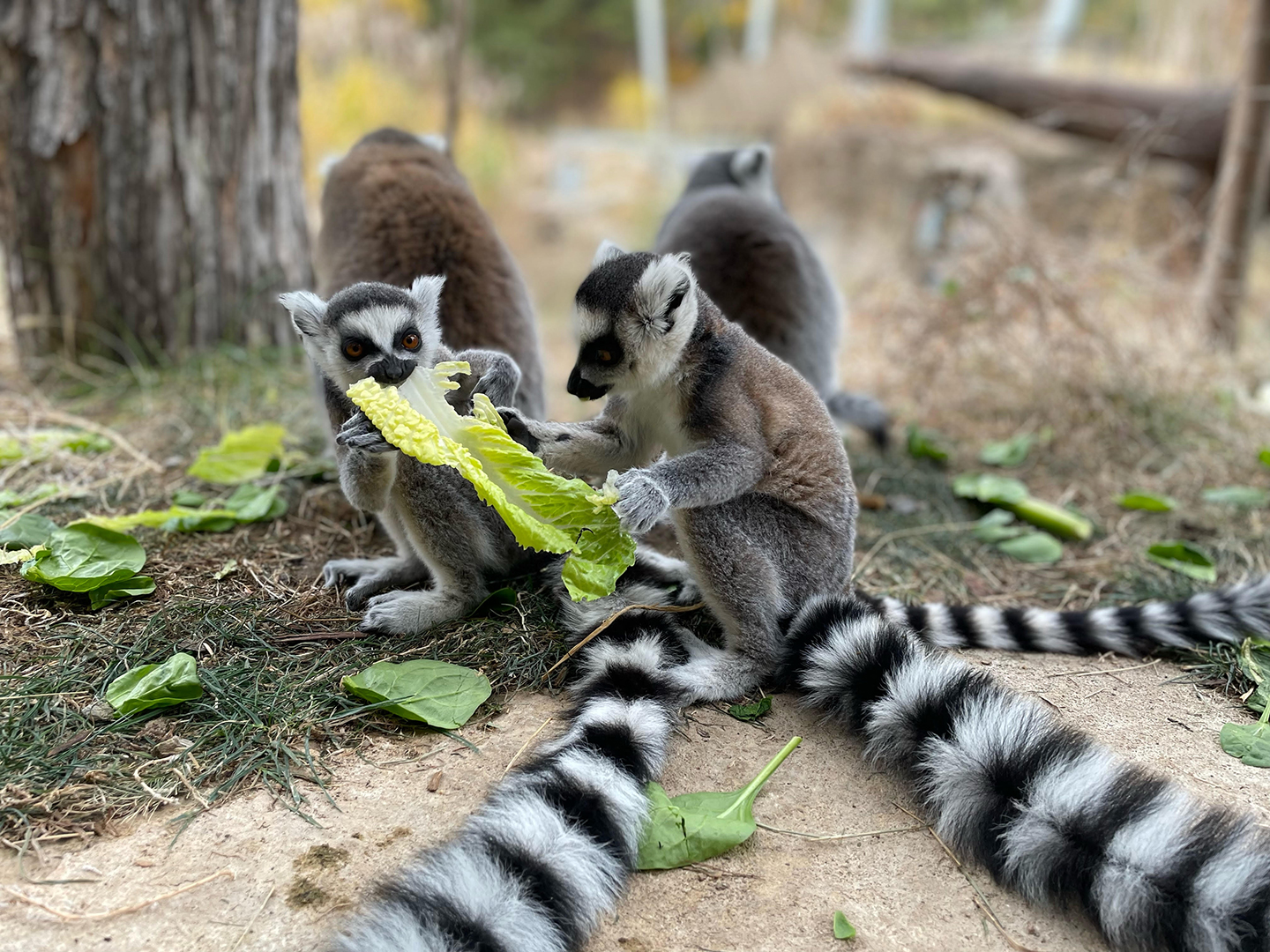 “We picked the name Anja to honor a forest reserve in Madagascar where you can find the highest concentration of ring-tailed lemurs in the world,” said Erin Henninger, Water’s Edge: Africa keeper. “Ring-tailed lemurs are endangered in the wild, and we hope her name will help us bring awareness about lemur conservation, and what people can do at home to help save Anja’s wild counterparts.”

Anja’s brother, Elo, is also named for lemur conservation. In Malagasy, the native language in Madagascar, elo means umbrella. Ring-tailed lemurs are an umbrella species, which means conservation efforts for their species typically help protect the other species sharing their ecosystem.

In the wild, lemurs are facing extinction due to habitat loss and a growing desire to own lemurs as pets. By purchasing wood and paper products that have the Forest Stewardship Council’s (FSC) label, lemur lovers can rest assured they’re not contributing to unsustainable logging practices that impact many species’ native forests. Although lemurs are adorable, they’re best cared for by organizations that know how to house this very social species in groups, with specialized care and programs aiming to save this species in the wild. Visiting lemurs at organizations accredited by the Association of Zoos and Aquariums is a great way to connect with lemurs without negatively impacting their wild populations.

Anja and Elo, along with their cousin, Maky, their mom, Allagash, their dad, Hercules, and their aunt, Rogue, are doing a superb job of helping CMZoo guests fall in love with their loveable species. The Zoo’s hope is that by making connections with our conspiracy (a group of lemurs), guests will take action to protect them in the wild.

“Anja and Elo are getting more and more independent every day,” said Henninger. “They are bundles of energy and it’s not unusual to see them zooming around the island with their six-month-old cousin, Maky. They like to jump and run around their trees and still jump on their mom, Allagash, who is really patient with their adorable antics. We’ve also seen them playfully sneak up behind their dad, Hercules, to pull on his dangling striped tail and then scurry away quickly, like they’re ringing a doorbell and running away. He knows it’s them and doesn’t seem to mind their little game.”

When they’re not pouncing from limb to limb or climbing on each other and their relatives, Anja and Elo can often be seen in a lemur cuddle puddle. Between all that zooming, naps are important. The six lemurs like to pile up in one hammock for an extra snuggly sleep. The twins have also started ‘sun worshipping’ like their older relatives.

“The lemurs love to climb up to the very top of the trees on Lemur Island in the morning to sun themselves,” said Henninger. “They face the sun and sit with their arms open, relaxed on their knees, with their paws palm-up, like a yoga pose. We’ve seen the twins mirroring the behavior in a very exaggerated pose with both of their arms extended way above their heads. It’s pretty cute to see them embracing those instincts, but not quite perfecting the pose just yet.”

The twins can be difficult to tell apart, but keepers say Anja’s forehead markings make an inverted widow’s peak, like her mom, Allagash. Elo’s dark fur above his eyes is more like a straight-across bowl cut, like his aunt, Rogue. Elo has longer tufts of fur on his ears than his sister. Anja is smaller than her brother and her tail isn’t as fluffy as Elo’s. Anja’s gray fur on her body is lighter than Elo’s.

“Both babies have bold personalities, but Anja seems more outgoing with keepers and has been more independent than Elo from a young age,” said Henninger. “He’s more of a mama’s boy, which is sweet. When they were still hanging on their mom all the time, Anja more often ventured off of mom to approach the rest of the group.”

Guests can see all six lemurs on their lush, green island in the middle of the hippo pool, indoors and outside, right away. Next time you’re at Water’s Edge: Africa, look out for the fast-moving twins and their family, bouncing around or enjoying a cuddle together.