As kids head back to school with so many changes due to the COVID-19 pandemic, our partner, Children’s Hospital Colorado, has provided a guide to helping prepare children and their parents for what’s to come with this blog.

Likewise, one of Cheyenne Mountain Zoo’s youngest residents is preparing for big changes ahead. Atka, a 3-month-old male Alaska moose who moved to Rocky Mountain Wild after being orphaned in Alaska, is working on training, learning to navigate new areas of the moose yard, and saying goodbye to bottles.

As animals adapt to changes like these, keepers look for ways to help them feel confident and calm, partly by making sure animals have access to things they like. Atka, for example, loves browse, otherwise known as tree branches. He likes to eat browse, investigate it and watch guests from behind it. He also likes shade and his mister to keep cool and comfortable. His keepers continually make changes to his yard that improve his confidence outside of the barn. They’re also developing trusting relationships with the little moose.

Each of Atka’s keepers has bonded with Atka over various special interactions when they first recognized he would hold a place in their hearts forever. For Rogers, it was a moment of innocent mischief.

“I went in to do some cleaning one day and he came over and was playing with a grain bag that I was trying to use as a trash bag,” said Courtney Rogers, lead keeper in Rocky Mountain Wild. “He was kicking it and overall adorably getting in my way while I was trying to get the job done. It was really endearing. He likes to play hard to get. If you’re in the yard with him, but focused on something else, he’ll usually come over and see what you’re up to and maybe nudge you for some attention. He prefers being the one to initiate interactions. That’s good because that means he’s confident and independent.”

His impressive growth could be contributing to that confidence. Atka has been gaining about two pounds per day. He now weighs more than 170 pounds, having gained 80 pounds since he arrived mid-July. Obviously, he’s eating well, and as he grows his diet will need to change.

Atka currently gets two bottles a day, down from three per day when he arrived. At around this age, moose calves in the wild would be weaning off of their mothers’ milk, so Atka is on the right track. He also eats a lot of browse, grain and two bananas per day. Still, the little guy loves that bottle, so his keepers are being proactive in building his trust in them and his interest in other motivators that will help him achieve the training that will help his keepers care for him throughout his life.

“He’s learning to eat his grain, but is much more open to it if we include a mushed banana,” said Rogers. “Lots of people ask why he gets bananas, since they’re definitely not a part of a wild moose’s diet. Bananas are an old moose keeper secret. Tahoma loved bananas, too. The Alaska Zoo keepers who cared for Atka before us knew about it, and we learned about it from other keepers. It’s one of those weird things that someone somewhere tried once and hit the jackpot. They do contain sugar, so he gets them in moderation and as a special treat when we need to motivate him to do something.”

Motivating him to train, try new foods and explore new spaces safely are banana-worthy endeavors, but building a trusting relationship with his keepers is the biggest priority.

“We’re teaching him that he can control his outcomes and get rewards by behaving in certain ways,” said Rogers. “He learned to stand on his scale from an early age, so we know how intelligent he is. We have started cueing him to allow us to touch his leg. It seems simple, but it’s a first step in letting him voluntarily participate in his health care. We will say ‘touch’ to him and then touch his leg. I show him it benefits him to allow us to do that by reinforcing his positive behavior with a piece of banana. Someday soon he’ll be too big for us to go into the yard with him, so we need him to learn these behaviors while he’s young. Especially as he weans off the bottle, we need him to know there are other benefits of interacting with us.” 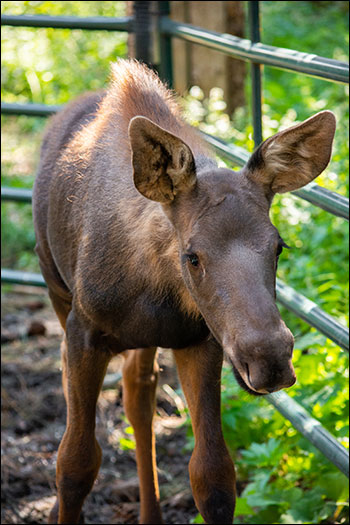 Right now, Atka can roam around a fenced area within the moose yard. He has access to trees, enrichment, shade and his mister. This smaller grassy part of the expansive moose yard doesn’t include potentially difficult obstacles, like the deep pool or rocky culvert. But soon, he’ll have a lot more space to explore.

“We’re taking it one step at a time,” said Rogers. “His outside space will be bigger, covering about half of the yard. We try to think of all the ways an animal could get into ‘trouble’ in a new space and address them. We’ll be watching closely when we take him on his first field trips into the larger yard, in case there are any spots we may have missed.”

In the wild, calves would learn to navigate from their mothers. Atka has the tools to navigate safely, but he doesn’t have the experience. A mother moose would instinctively pick the safest paths to navigate terrain and her calf would learn by watching her.

“Since he’s so independent, we’re not sure if he’ll follow our lead,” said Rogers. “The yard has some obstacles we want to make sure he knows how to navigate safely, but we trust he’ll figure it out quickly by depending on his natural moose instincts.”

Just like Tahoma, this little moose doesn’t seem to be phased by much, so keepers are optimistic about his future explorations.

“I’ve been impressed that he is pretty brave with new things,” said Rogers. “We got a new shade sail to give him some more shade in the yard and we laid it on the ground to figure out how to hang it. Some animals would be really hesitant about something like that, but he came right up to it and kept walking on it and through it. He was very helpful while we tried to install it.”

We’ll share updates as keepers continue helping Atka acclimate to his yard and new training opportunities, as he grows. Guests can visit Atka in the moose yard in Rocky Mountain Wild.