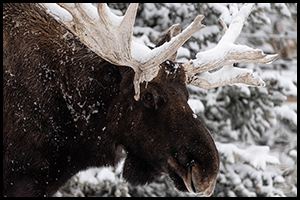 As the oldest Canada moose in human care in the United States, CMZoo’s 12-year-old male, Tahoma, has received specialized care for years. Until recently, his issues – including arthritis in his limbs and spine, and an on-and-off cough – haven’t seemed to decrease his long-term quality of life.

Now, Tahoma is showing signs that his pain is increasing, so keepers and CMZoo veterinary staff are working to keep him comfortable for his remaining time. Tahoma’s care team says he’s still eating well, which is a good sign.

Because moose are rare in human care, there’s widely varying data about their average life expectancy. The range we have seen from reputable sources is from 5 to 15 years. But, they have been known to decline quickly once issues become widespread, like this.

“We’ve seen a general slowing down in Tahoma over the last several weeks,” said Rocky Mountain Wild Animal Keeper Allison Rosing. “Specifically, he’s dealing with a significant arthritis-related limp in his front left leg, which he’s been compensating for by shifting weight to his right leg. Because he’s putting more weight on his right leg, we’re seeing inflammation in his right knee. We’ve also seen him ‘hiking’ his head up when he walks, to lessen the weight on his left leg.”

“We know we’re not going to be able to correct any of this for him, but we can do things to make him more comfortable,” said Rosing. “We’re managing his pain by increasing his anti-inflammatory medications, pain medications and laser therapy sessions. We’re also providing more spaces for him to lie down and rest.”

His team moved some large branches, which he’d previously enjoyed sparring with, out of his barn to make space for a big pile of pine shavings that he can lie on.

“He loves it,” said Basia Dann, Rocky Mountain Wild animal keeper. “He comes in to his barn every night and curls up in his pine shavings.”

Tahoma receives laser therapy on his joints three times per week. Laser therapy is thought to reduce pain and inflammation. Keepers have noticed his limp improving since starting the more frequent therapy regimen.

“Lately he seems more willing to come over and train, which is great because it gives us more opportunities to give him his medications, lots of love and special treats,” said Dann. “In addition to the laser therapy, we have vet appointments with him weekly, so we can track the progression of his issues and make adjustments to his treatment quickly.”

Tahoma’s keepers offer his oral medications – which Tahoma doesn’t seem to enjoy taking – with treats like bananas, kiwi and rye crackers with honey and molasses.

“There’s not a lot known about moose in human care, because there are so few of them,” said Dann. “We’re tracking Tahoma’s issues and overall quality of life, so we can help him stay comfortable for as long as we can, and so we can share information with other organizations whose moose could benefit from it.”

We will continue to keep Tahoma as comfortable as possible while continuing to track multiple factors for his overall quality of life. Stay tuned for more updates on Tahoma as we have them.