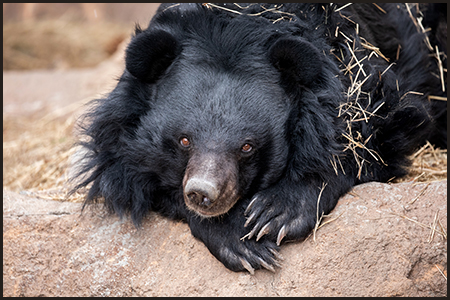 Their majestic shaggy manes. Their oversized ears. Their frequent cuddling. Their bold-but-gentle demeanors. It’s hard to pick a favorite thing about CMZoo’s senior Asiatic black bears, Honey and Beezler. Luckily, we don’t have to.

The two extremely fluffy black bears live just above the pathway between the mountain tapir exhibit and Grizzly Grill. They’re also on the path to the Zoo’s main office building, so a lot of CMZoo staff stop and say hello to the ladies daily. It may not be obvious to all who visit the bears, but they’re a rare sight to appreciate. Asiatic black bears are only visible in five zoos accredited by the Association of Zoos and Aquariums (AZA).

“They’re a couple of my favorite animals at the whole Zoo,” said Erika Furnes, Rocky Mountain Wild animal keeper who has worked with them for four years. “There’s just something about them that makes us all fall in love with them, but it’s hard to say specifically what it is. It’s probably a combination of their adorable appearances, gentle natures and pure old-lady sass.”

Honey and Beezler, sisters, will turn 29 years old in January 2022. They’re the oldest documented Asiatic black bears in human care, and will reach the AZA’s median life expectancy for the species on their next birthday. There’s no denying that these two are slowing down, but they have mastered the art of gracefully embracing their golden years.

“The first thing most people notice is their intense stares,” said Furnes. “They often sit on the very edge of their rocky ledge and watch our guests. They watch us keepers, too, and they seem to recognize us. They know we’re usually here with some fun enrichment or training rewards.”

Recently, the keepers gave them cornstalks as enrichment. Although they were given multiple stalks to share, Honey and Beezler set their sights on the same prized piece. After tug-of-war and a little sibling bickering, the two cuddled up for a nap.

These bears are lifelong scholars. When keepers train with the bears from behind a protective barrier, Honey and Beezler are excited to participate. They’re currently working on husbandry behaviors that allow their care team to monitor for age-related issues, including blood draw training and paw and mouth presentations. Down the line, if they’re showing signs that they’re not feeling well, the blood draw training will be a learned behavior that allows our veterinary team to diagnose them without adding stress to the bears. They’re equally interested in training, and they’re well rewarded for their efforts.

They like veggies and fruit – even jackfruit, which is turned down by nearly every other animal at the Zoo. They like yogurt as a special treat, and grape jelly – specifically grape flavored jelly – is their favorite. They get an omnivore chow to provide the protein they need in their diet. Their keepers have offered them fish, but they turned up their noses at it. They preferred to smash the fish to pieces and rub the fish pieces all over their luxurious fur. Call it a unique perfume. 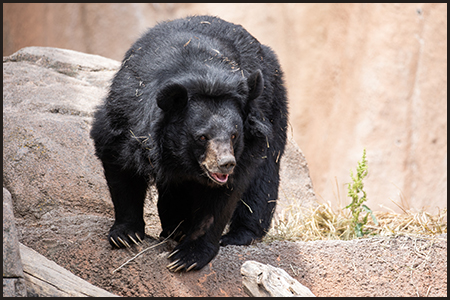 “They nap a lot, but in between sleeps, they’re pretty active for their age,” said Furnes. “We set their exhibit up with lots of activities that encourage them to stay active. They like to cool off and play with logs in their pool in the summer months, and that’s good exercise. Their habitat has multiple levels, so just by encouraging them to explore different areas, they’re getting chances to stretch and strengthen.”

They sometimes climb the trees in their exhibit to reach a tasty snack, dig in the various substrates available to them, or forage in leaf piles their keepers spread throughout their two-yard exhibit.

Sleep is equally as important as adventure, though. The ladies can often be found lying together in a sunny spot on their rocks, or cuddling in a comfy hay pile in their den. Honey also likes to lounge in their hammock. Honey is the more laid back bear, enjoying many afternoons in the hammock and preferring to have her enrichment delivered to her. Beezler seems to like the challenge of harder-to-reach enrichment, and is usually the first to explore a new activity.

Both bears have the distinctive Asiatic black bear marking that gives them the name Moon Bears: a white crescent moon shape in the long fur on their chests. The species is small for a bear. They each weigh around 300 pounds, which is petite compared to 700-pound CMZoo grizzly bears, Emmett and Digger. You can tell the sisters apart by looking for the details. Beezler has a bigger white spot under her chin and has brown claws. Honey’s claws are longer and lighter.

As Honey and Beezler continue to age, their care team will monitor them closely for advancing arthritis, which they receive pain and anti-inflammatory medications to cope with for now. Next time you’re at CMZoo, take a walk up to visit these rare bears, and see if you can tell who’s who.