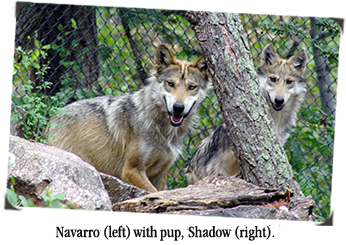 It’s no surprise that Luna, Navarro and their gorgeous pups continue to be guest favorites at Cheyenne Mountain Zoo. What did surprise guests, keepers and vet staff earlier this year was the arrival of the pups.

After decades of unproductive breeding attempts, the Zoo welcomed a litter of the endangered species. The pups and parents are very important to the continued survival of the species in human care, and as ambassadors for their endangered counterparts in the wild.

“Some people wonder why wolf demonstrations at the Zoo aren’t as hands-on as some of the other animal demonstrations,” said Basia Dann, Rocky Mountain Wild animal keeper. “We don’t want to create too much of a positive association between people and food because one of their biggest threats in the wild is the sometimes uneasy sharing of space between humans and wildlife. Regardless of how much we want to talk to them and encourage them with positive food reinforcement the way we do with other animals, it’s best for them if we keep our distance and they keep theirs.”

That’s because the ultimate goal is for CMZoo’s descendants to one day return to the wild, where populations have been dwindling.

The Mexican wolf has been protected as an endangered subspecies of gray wolf since 1976 under the Endangered Species Act of 1973. Mexican wolves were near extinction in 1998, when the U.S. Fish and Wildlife Service (USFWS) and partner agencies initiated a captive breeding program descended from seven founder wolves.

USFWS reports that there are only 114 Mexican wolves in the wild and 300 in human care. The population of Mexican wolves in human care at Association of Zoos and Aquariums (AZA)-accredited zoos is an important part of the plan to repopulate the species in the wild. The Mexican Wolf Recovery Program is run by USFWS, with cooperation from the AZA Mexican Wolf Species Survival Plan. 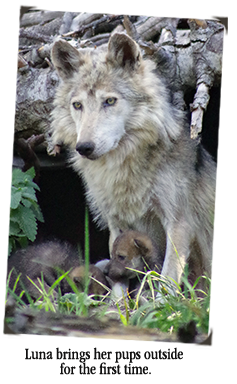 Cheyenne Mountain Zoo has been a participant in the program since 1994. But, until this year’s litter, it had been 20 years since wolf pups made an appearance at the Zoo. For many years, the Zoo housed a bachelor pack of wolves, but within the past seven years, the AZA’s Species Survival Plan (SSP) placed various breeding pairs at Cheyenne Mountain Zoo with the hopes of offspring.

Luna, the 10-year-old mother of the 2018 litter, and two-year-old father Navarro and their pups, as exemplary animal ambassadors, continue contributing to the success of the Mexican wolf Species Survival Plan. One pup, Lupa has already moved on to another organization where the hope is that she will have her own litter one day. Her move was always part of CMZoo’s plan, but was expedited when keepers discovered Lupa limping one morning in November.

Immediately upon noticing Lupa limping, CMZoo vet staff took x-rays of her leg and discovered a fracture of the growth plate of her left femur, just above the knee. The injury is not uncommon among young wolves, but keepers and staff don’t know exactly how it occurred. With approvals from USFWS and the SSP, CMZoo took Lupa to the College of Veterinary Medicine and Biomedical Sciences at Colorado State University in Fort Collins, Colo., where surgeons discovered the fracture has worsened in the short time since her last x-rays.

After a successful surgery, Lupa returned to CMZoo, but staff quickly recognized the Zoo’s terrain and a quickly approaching Colorado winter we going to add challenges to her healing process. Although staff separated Lupa from the full pack for her recovery period and placed her in an adjacent area with a littermate, she was still a very active pup in a rocky and vertical natural habitat. 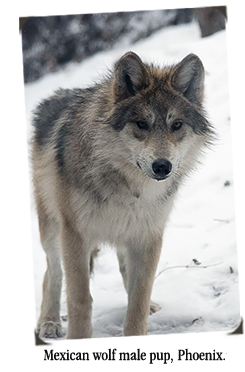 “Like your dog at home does after a surgery that requires stitches, she was irritating the wound by overstretching the incision, so it wasn’t healing as quickly as we would have liked,” said Dr. Eric Klaphake, associate veterinarian at Cheyenne Mountain Zoo. “Because her leg was shaved in order to perform the necessary surgery, we decided the snow and cold temperatures would be uncomfortable for her. We didn’t want to keep her inside without socialization, so we found her a new home in a flatter, warmer environment, where she could receive a companion as well.”

Phoenix, Bluestem, Hope and Shadow, Lupa’s littermates at CMZoo, are flourishing. They have grown so much since their birth in May that it has become difficult to tell them apart from their parents by size alone. Luckily, CMZoo keepers have some tips on identifying them. Shadow’s face is darker than the rest of the pack, and she has light eyebrow patches. Phoenix is the biggest of the pups and has two dark spots in his left eyebrow. Bluestem and Luna are similar in appearance, with light fur and even lighter eyebrows. Bluestem is smaller than Luna. Hope has a dark face and dark eyebrows and has a black and white ‘V’ patter in the fur on her chest. Navarro is the biggest wolf whose face is a darker shade of red than the rest of the pack.

You can catch a glimpse of one of the rarest species in North America during a wolf keeper talk at Cheyenne Mountain Zoo every Monday, Saturday and Sunday at 10:30 a.m.