The Cheyenne Mountain Zoo family is mourning the loss of Zwena, a 13-year-old female African lion who was born at the Zoo. Monday afternoon, Zwena’s care team made the difficult and humane decision to euthanize her due to progressive neurological issues and her declining health and quality of life. 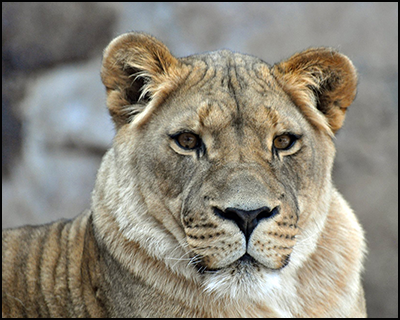 In July, we told you we were making adjustments for Zwena as she struggled with chronic mobility issues associated with her neurological condition. Between July and the beginning of October, she seemed to be having mostly good days. Despite continued treatment and care, she recently started declining quickly. The median life expectancy for African lions is 16.9 years, but as with humans and other species, life span can be less, due to various medical challenges, like the ones Zwena was facing.

Zwena, known affectionately as “Z” by her longtime keepers, was a staff favorite throughout the Zoo. She was well-loved and respected for her no-nonsense approach to building relationships with people.

“She was always the biggest personality out of the girls,” said Diana Miller, African Rift Valley keeper and Zwena’s primary trainer for nearly 9 years. “She was very loud. When she would see us coming she would either make a happy grumble or snarl at you. She was so sassy and fierce – and she loved to participate in her voluntary training. She was always enthusiastic with training and demonstrating her awesome lion behaviors during keeper talks. She would jump up on the cape buffalo statue with such vigor and a loud groan. She was impressive. She made a real impact with our guests.”

Zwena made an impact on her pride, too. She lived with Abuto, the pride patriarch; Lomela, her sister; and Elsa, her niece. The two younger males are Zwena’s nephews, Aslan and Boma. They lived with the full pride when they were younger, but now live as their own bachelor pride.

“The first time Z got to be with the cubs, Lomela was hesitant for them to go out into the big yard, but fearless Zwena just led them right out,” said Miller. “’Aunty Z’ encouraged all three cubs to chase her into the yard and the cubs went flying after her. She just loved playing with them. Lomela would lay nearby and call the cubs to come back, but they just wanted to go and play with Aunty Z. That was her vivacious personality in a nutshell.”

Zwena was an amazing ambassador for her species, helping guests fall in love with African lions through her energetic personality and intense focus. She will be dearly missed.

“She made me the keeper I am today,” said Miller. “You make connections with all of the animals you care for, but some animals leave a bigger paw print on your heart. Zwena definitely did that for me. I am so lucky to have gotten to know her and work with her. We will all miss her so much, but we’re grateful for the time we had together.”