Cheyenne Mountain Zoo said a heartfelt goodbye to one of its longest residents on Friday night. 29-year-old Honey, a female Asiatic black bear, started showing signs of sudden illness and pain on Friday morning. After a thorough exam in the Zoo’s veterinary hospital, the difficult but humane decision was made to euthanize her, after serious age-related conditions were discovered. 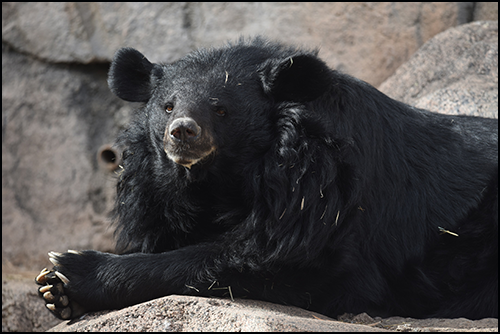 Honey came to CMZoo with her sister, Beezler, when the pair were just shy of a year and a half old. In their nearly 28 years here, they have touched the hearts of many keepers and millions of guests. Asiatic black bears are currently housed in only four North American zoos accredited by the Association of Zoos and Aquariums.

“I had walked by their exhibit for years, but until I met and started working with them a couple of years ago, I never realized how cool they were,” said Courtney Rogers, lead animal keeper for the sisters. “Even though they were sisters and lived together all their lives, Honey and Beezler had very different personalities. We often described Honey as a ‘sweet old lady,’ but she could also be super assertive at times.”

At the time of her passing, Honey was the oldest-known Asiatic black bear currently living in human care, tied with her sister. Her age met the median life expectancy of females of her species, which is 29.3 years.

“Caring for Honey and Beezler was what made me realize I really love bears,” said Erika Furnes, another animal keeper for the bears. “They inspired me to champion an Asiatic black bear research and recovery program in Vietnam, which will receive funding thanks to our Zoo members this year. The sisters did their jobs perfectly, which is to make people fall in love with them, and in turn, inspire conservation action for their relatives in the wild.”

In addition to general husbandry training, the bear sisters also participated in some unique training and enrichment to help them with specific ailments due to their advanced age.

“After keepers noticed that Honey had some cloudiness in one eye, veterinary opthamologists recommended eye drops for her twice a day,” said Rogers. “Honey quickly learned to put her face through a modified blood draw port in her den. She was very good about holding still to let us put in the eye drops, and in return, she got a special treat of eating applesauce straight from the pouch.”

Honey was also very patient during other cooperative husbandry behaviors, such as voluntary blood draws where she would place her front paw into a specially designed sleeve. 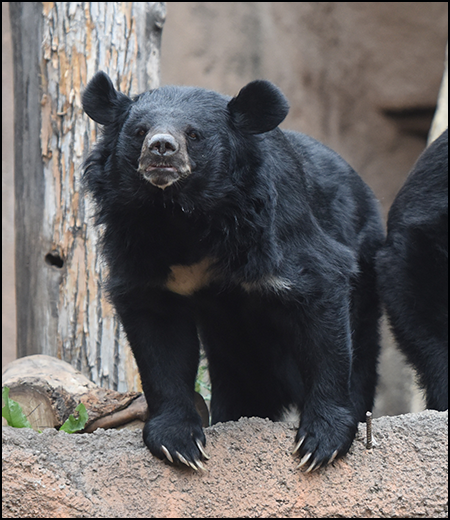 “Honey was shorter than Beezler, so we had to make a makeshift ‘booster seat’ for her, in order for her to get in position to put her paw through the port,” said Rogers. “She not only learned to use the booster, which was a tire filled with hay, and present her paw, but she also waited patiently when the vein proved more difficult for the vet team to find than usual.”

The relationship between the sisters and their unique personalities were part of what made the pair so special.

“Honey was the more laid-back of the two,” said Furnes. “She was a slow eater, which I could relate to, since I’m the slowest eater in my family. Beezler would often get to treats first, but when Honey really wanted something, she would stand up to Beezler and protect her portion with her paws. Sometimes, they would alternate stealing lettuce from each other – Beezler would swipe some into her pile, but then Honey would swipe it back. And they’d continue, back and forth.”

Other than the occasional squabbles over food, the sisters had a close relationship and typically chose to spend time together. Even though they had the option for separate sleeping dens, keepers usually found them sleeping near each other in the same space in the morning.

“Honey was very tolerant of Beezler,” said Rogers. “We set up a physical therapy room for them to help keep them mobile and active, despite the advancing arthritis they both had. There were toys and treats everywhere – even up high, where they would really have to work to reach them. One time, we saw Beezler use Honey’s back as a ladder to reach some snacks. Honey allowed her to do it, and was rewarded when Beezler knocked the treats down to Honey.”

Keepers are keeping an extra-close eye on Beezler, as she adjusts to Honey being gone. Beezler spent time with Honey on her final day, even cleaning her paws off for her. This morning, Beezler came right over to keepers in the morning, and her behavior seemed normal. She received a lot of special enrichment today, including water in her pool and fresh mud puddles to wallow in. Keepers will continue to give her extra attention in the coming days and weeks, to help make the transition easier for her.

Honey was a wonderful ambassador for her species, and she will be greatly missed.