ROCKY MOUNTAIN WILD NAMED #2 BEST ZOO EXHIBIT IN NORTH AMERICA – For the fourth consecutive year, Cheyenne Mountain Zoo has been voted one of the top ten zoos in North America in the USA TODAY 10Best Readers’ Choice Awards. This time, America’s mountain Zoo was recognized in two categories: #4 Best Zoo in North America (up from #6 in 2019) and #2 Best Zoo Exhibit in North America, for its Rocky Mountain Wild exhibit (up from #5 in 2019). 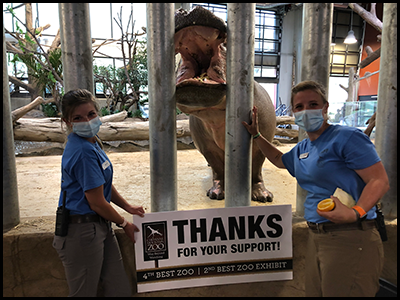 “This ranking means even more to us this year, with the difficult times the Zoo has been going through in 2020,” said Bob Chastain, President and CEO of Cheyenne Mountain Zoo. “Even though the Zoo was closed due to virus restrictions for nearly three months, and we currently have limited capacity and other precautions in place, our fans and members still rally around us. To have that kind of community and nationwide support really means a lot.”

The online contest was originally open for voting starting March 16, in the midst of a wave of COVID-19-related closures and stay-at-home orders around the country. Despite the fact that Cheyenne Mountain Zoo closed to the public on March 17, our fans still helped us climb high in the rankings, until voting was temporarily paused on March 24. When voting reopened June 14 through July 6, our fans and members rallied to boost us to the final rankings.

This is the second time that Cheyenne Mountain Zoo has been ranked as high as 4th Best Zoo in North America. The first time was in 2018.

Cheyenne Mountain Zoo aims to set itself apart by making every guest experience inspiring. With its simply stated vision, “Every Kid. Every Time. Goosebumps.” at its cultural core, CMZoo creates environments and experiences that bring people closer to animals. Exhibits are designed to remove unnecessary physical barriers, while keeper-led animal interactions are designed to establish and build connections between our guests and the animals who live here. CMZoo’s goal is to foster connections that inspire our guests to take action to protect animals and their habitats in the wild. 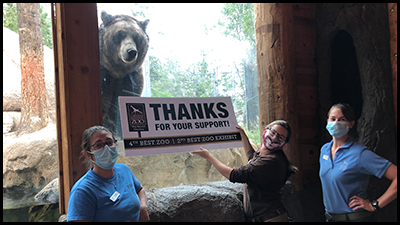 “This national recognition reminds us that the impact of our mission reaches beyond the city of Colorado Springs,” said Chastain. “We were nominated amongst a group of impressive organizations, in markets much larger than ours, which makes us even more proud to have been named the fourth best zoo in North America.” 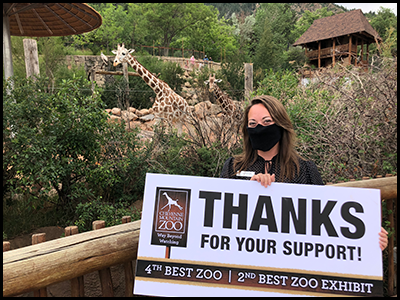 This is the second time Rocky Mountain Wild has been nominated in the Best Zoo Exhibit category, and the fourth time Cheyenne Mountain Zoo has been nominated in the Best Zoo category. A panel of travel experts, recruited by USA TODAY editors, nominated 20 North American Association of Zoos and Aquariums-accredited zoos and exhibits, and supporters had a total of four weeks to cast their votes once per day for the nominees of their choice.