Bailey, an 8-year-old reticulated giraffe at Cheyenne Mountain Zoo, welcomed her very first calf to the herd at 11:37 a.m. today. Bailey and the female giraffe calf are doing well. Following Cheyenne Mountain Zoo tradition, the calf will be named after she is 30 days old. 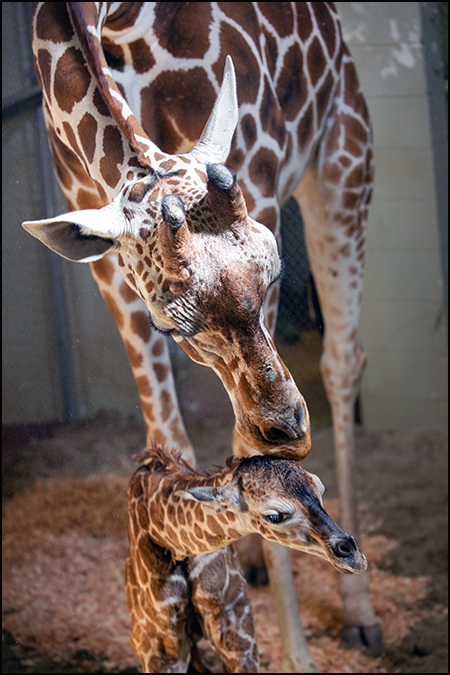 “You couldn’t ask anything more of a first-time mom,” said Jason Bredahl, giraffe animal care manager at CMZoo. “Bailey is nonstop grooming her baby, paying attention and making sure the baby is in a good position to nurse. Mom is doing a great job.”

The little calf is doing well, too. She’s already winning the hearts of CMZoo staff and online fans.

“This is probably the smallest giraffe calf I’ve ever seen,” said Bredahl. “Bailey is small for a giraffe, too, so that’s not surprising. She’s super adorable. She’s strong and is nursing well, so we’re really excited to share her with everyone as soon as we can.”

At first, the calf had a hard time standing because she had positioned herself in a corner of the stall and she kept bumping into the walls before she could get her footing. After waiting to see if she could get up on her own, keepers and vet staff asked Bailey to move into another area so they could give the calf a hand. The team picked her up and moved her into the middle of the stall around 1:27 p.m. She took her first steps on her own after a quick medical assessment, then a nudge from mom, at 1:38 p.m. As long as keepers observe that baby and mom are doing well, they will continue to let Bailey take the lead on providing her care.

The weight and height of the calf are not known yet, although keepers and vet staff say she is one of the smallest giraffe calves they’ve ever seen. Newborn giraffe calves are typically five to six feet tall and weigh 150 to 200 pounds. Exact measurements haven’t been taken, but this calf appears to weigh about 100 pounds and is around five-and-a-half feet tall.

The calf is the seventeenth member of Cheyenne Mountain Zoo’s reticulated giraffe herd. The calf is the first offspring for mom, Bailey, and the sixth to be sired by dad, Khalid (pronounced cull-EED). Bailey moved to Cheyenne Mountain Zoo on a breeding recommendation in Sept. 2016. CMZoo’s breeding program began in 1954 and has welcomed more than 200 calves since its inception. 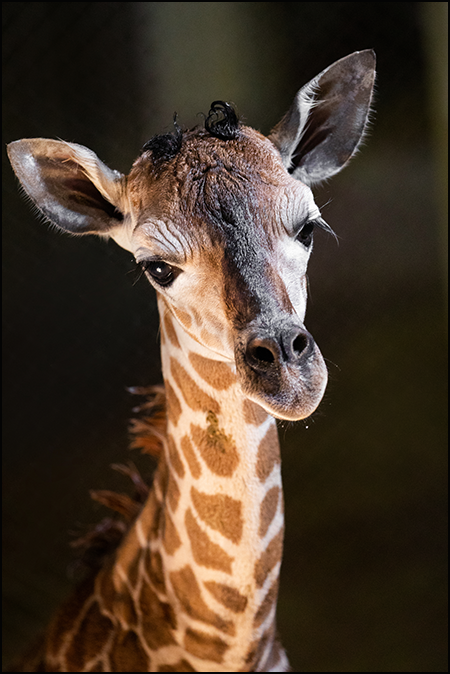 Thousands of worldwide viewers witnessed the calf’s birth on Cheyenne Mountain Zoo’s live camera feed, which will continue to stream live from the sand stall, where Bailey and the calf will continue to bond for the coming weeks. The live stream of the birth stall, and both outdoor giraffe yard camera feeds, are available at cmzoo.org/giraffecam. The Zoo will continue to provide updates on their social media channels.

The barn will remain closed to guests for at least another day, to give the new calf time to bond with mom. Other members of the CMZoo herd will be available for viewing and feeding in the outside yard from elevated platforms, where guests can get eye-to-eye with and feed lettuce to the herd, weather permitting.

In October and November 2019, CMZoo helped establish a new population of a critically endangered giraffe in Uganda. The Operation Twiga IV team successfully reintroduced 15 Nubian giraffe to Pian Upe Wildlife Reserve, where they haven’t existed in nearly 25 years. CMZoo VP of Mission and Programs, Dr. Liza Dadone, assisted with research and anesthesia, and provided care for the giraffe during the translocation. Our contribution to this effort is possible thanks to ongoing support from CMZoo members, guests and donors. Operation Twiga IV is led by Uganda Wildlife Authority with support from Giraffe Conservation Foundation, Colorado State University Veterinary Teaching Hospital, Cheyenne Mountain Zoo and other partners from around the world. See a video about the Zoo’s latest field conservation effort, Operation Twiga IV, here.

Through Cheyenne Mountain Zoo’s Quarters for Conservation program, by which 75 cents of every Zoo admission is allocated to conservation, guests have helped CMZoo send more than $3 million to support important conservation efforts since 2008.