In the coming weeks and months, Cheyenne Mountain Zoo will continue its efforts – and embark on new ones – to support Species Survival Plans (SSPs) for Amur leopards and Amur tigers. This important work, led by the Association of Zoos and Aquariums (AZA), contributes to the survival of these iconic species by managing the breeding of animals in human care.

CMZoo Amur leopards, Anya and Anadyr (ana-DEER), and CMZoo Amur tiger Chewy and a new female, Savelii, who is scheduled to arrive in October, have been selected by the SSP as pairs to breed. The selections are based on many factors, including each animal’s genetic diversity and their genetic representation in their species in human care.

This won’t be the first time five-year-old female CMZoo Amur leopard, Anya, and four-year-old male, Anadyr, have the opportunity to spend time together. Since Anadyr’s arrival at CMZoo in 2017, keepers have worked to introduce him and Anya, with the eventual hopes of breeding.

“Last year, Anya was showing all the signs that she was ready to breed with Anadyr, but he wasn’t reciprocating,” said Rocky Mountain Wild Lead Animal Keeper, Allison Rosing. “Now that Anadyr is four years old, we’re hopeful he’s more mature and will be more receptive.”

By the end of breeding season in 2018, Anya and Anadyr were spending about four hours per day together. Keepers observed them sleeping and grooming together, which is a sign that the cats are comfortable around each other. Still, they never bred. During the rest of the year, outside of the period that females are in estrus, the leopards have their own spaces, as they would in the wild. Reintroductions with the two Amur leopards this breeding season are underway, and keepers are cautiously optimistic about their progress.

Wildcats Conservation Alliance estimates there are approximately 500 Amur tigers in the wild. They’re listed as endangered by IUCN. Through the SSP’s management of Amur tigers in accredited Zoos, CMZoo male Amur tiger, Chewy, was selected as a match with Bramble Park Zoo Amur tiger, Savelii.

Along with this recommendation, CMZoo male Amur tiger, Thimbu, will move to Bramble Park Zoo. Read about Thimbu’s next adventure here.

Unlike Anya and Anadyr, Chewy and Savelii will be starting from the very beginning. During animal introductions, keepers always follow the animals’ leads and observe behaviors that indicate that they’re comfortable and receptive with each other, or not. They start very cautiously by observing behaviors during “howdies,” which are introductions with a barrier between the cats. They allow animals to investigate each other without the risk of aggressive physical interactions.

“We prepare as much as possible, but we know from experience that big cats can be unpredictable, so we stay flexible during introductions,” said Rebecca Zwicker, Asian Highlands animal care manager. “We look for signs of interest or aggression between the cats during ‘howdies,’ and respond based on their interactions. That could mean we steadily increase the amount of access they have to each other. It could also mean we give them more time, but limit their access, to get used to each other.” 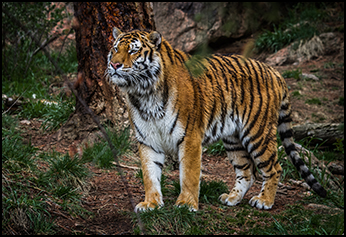 Having experienced a heartbreaking loss during a previous big cat breeding session, Cheyenne Mountain Zoo is fully aware of the dangerous scenarios it presents. CMZoo Amur tiger, Zoya, was killed by her mate in one such breeding session in 2016.

Since then, Cheyenne Mountain Zoo has not participated in tiger breeding. Now, as wild populations decline and the SSP’s past three years of efforts to breed Amur tigers prove unsuccessful, CMZoo has accepted the SSP’s recommendation to try again.

Although big cat breeding has proven to be risky, Cheyenne Mountain Zoo animal care and veterinary staff take all precautions possible. Ultimately, CMZoo acknowledges that the work to continue the existence of these species is so necessary that we have to try.

“We have two male Amur tigers who are amazing ambassadors. But, we’re never going to be able to contribute to the future of this incredible species with our current setup,” said Zwicker. “This is important. Each year that goes by is significant for the survival of tigers. We understand the risk, but we can’t watch populations continue to dwindle in the wild and just do nothing. Not on our watch.”

Many ask if artificial insemination (AI) is a better option for riskier breeding scenarios, like these. It can be a last-resort option, but isn’t historically successful with tigers because of the females’ unique ovulation patterns.

Female tigers are induced ovulators, which means the act of mating causes the female to release an egg for fertilization. It can take several days of mating interactions to stimulate ovulation and guarantee fertilization of the egg. Because of this, AI success in tigers has historically been very low; only three out of 60 procedures in the last 20 years have resulted in a cub. Even with the odds stacked against AI, CMZoo would participate in collecting samples from Chewy in case this last resort needs to be explored.

“We have a team of experienced experts managing and weighing in on the best options for our big cats during this exciting time,” said Zwicker. “We’re looking forward to managing these important efforts with our cats’ safety in mind. We love these animals and would never put them in harm’s way intentionally. If all signs point to yes, we will introduce the cats and hope for the very best. At a certain point, it is up to them.”

Stay tuned to CMZoo’s social media channels and The Waterhole newsletter for updates on the tigers’ and leopards’ progress throughout the fall and winter months.