The Cheyenne Mountain Zoo family is celebrating the long life of the eldest member of the Zoo’s reticulated giraffe herd, Riyadh, today. Since her birth at CMZoo in 1990, she made countless connections with guests, members and fans, who would delight at her small-but-mighty personality and regal nature. 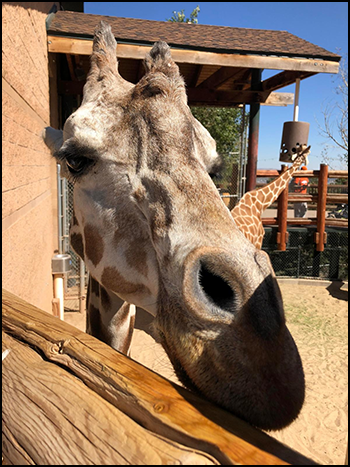 As she grew older, Riyadh began showing normal signs of aging, including dealing with arthritis. Over the last several months, she responded well to medications and seemed to be comfortable. But yesterday, her keepers noticed she wasn’t bearing weight on her hind right leg. With the CMZoo vet team, they made the difficult decision to humanely euthanize Riyadh, as her treatments were no longer providing enough relief for her to continue having a comfortable quality of life.

“Despite the fact that we’ve been mentally preparing for this time to come, it’s still sad to say goodbye,” said Rachael Hahn, animal keeper for giraffe and Riyadh’s primary trainer. “This was the right decision for her, and I’m so glad she was able to spend her last day in the beautiful Colorado sunshine.”

Riyadh was loved for her small stature and confident personality. She was much shorter than the majority of the herd, and was often mistaken for a calf.

“People really fell in love with her because she was easy to tell apart from the rest of the herd,” said Amy Schilz, senior lead keeper for giraffe. “Those who didn’t know her sometimes thought she was a baby, and she would benefit by getting extra lettuce from guests who wanted to feed ‘the little one.'”

“She was also one of our giraffe that was more willing to let guests give her scratches on her neck, which was a special experience that not every giraffe will allow,” said Diana Miller, senior animal keeper for giraffe. “For some reason, she was hesitant to let keepers touch her neck, but she didn’t mind at all when guests would pet her.”

Her shorter legs made her easy to identify in the herd, but didn’t impact her confidence if she was ever nudged by a larger herd mate.

“She was hilarious to watch interact with the other giraffe because of how tenacious she was,” said Hahn. “She could get whatever she wanted, despite her size. Most of our giraffe get out of the way when Mahali, who’s one of our tallest giraffe, comes around. But not Riyadh! She would push him around to get the best browse or whatever she wanted. All of the other giraffe got out of the way for Riyadh.”

The keepers describe Riyadh as having a “regal” way about her – so much that they had nicknamed her “Princess Ri.”

Riyadh helped the newest herd member, 2-year-old Panya, settle in to the herd, spending nights with Panya in a stall separate from the herd while Panya, who has a shy demeanor, adjusted to her new surroundings.

“Panya and Riyadh developed a strong bond,” said Miller. “It seemed like they found a soulmate in each other, since they’re both smaller in stature.”

Riyadh, pictured here in Sept. 2019 sharing the side yard with Viv, was known for her small stature and unique markings

Throughout her life at CMZoo, Riyadh contributed to her species as a well-loved animal ambassador and through her individual reproductive contributions. Riyadh gave birth to eight healthy calves, leaving a legacy of six healthy grandcalves and one healthy great-grandcalf. Two of Riyadh’s daughters, 19-year-old female giraffe, Twiga, and 22-year-old female, Muziki, are still members of the herd at CMZoo.

Riyadh participated in voluntary training that allowed our vets and staff to help giraffe in human care and in the wild. All giraffe in our herd can choose to participate in trainings that allow vet staff to perform research on hoof care and even build a life-saving plasma bank.

“Riyadh was a little difficult to train in the beginning,” said Schilz. “She would outsmart me on every maneuver! Once we figured out a way to give her full control over everything that was happening, we started to make headway. She learned to touch a target stick, which was our cue that we could touch her hooves or do some other contact that we needed. If she gave us ‘permission’ by using the target stick, we were good. But she could still throw out a stern ‘side-eye’ look, if she didn’t approve of something we were doing.”

Once Riyadh and her keepers figured out the key for her training, she became a training superstar. She was often the giraffe that helped teach other giraffe professionals from around the world how to train during CMZoo’s annual Giraffe Care Workshop. Since she was smaller, she was less intimidating for participants to work with, and she was solid in responding to cues, even for those who didn’t have a relationship with her or have as much experience with training giraffe.

“Even as her primary trainer, she taught me so much about training and caring for giraffe,” said Hahn. “She was just so smart! She was super special.”

She also helped to pioneer groundbreaking care for our herd, as she was one of the first to voluntarily accept shoes on her hooves as a treatment for her arthritis. She also voluntarily allowed a veterinary ophthalmologist to take her eye pressure readings using a puff of air (non-contact tonometry) – something many humans have trouble tolerating.

Riyadh’s role as an ambassador for her species helped countless CMZoo guests fall in love with giraffe, inspiring them to take action to protect her wild relatives. CMZoo has partnered with the Giraffe Conservation Foundation to support conservation efforts. One recent example is Operation Twiga, a giraffe translocation project in Uganda, Africa. The Zoo’s visitors and members contribute significantly to those efforts through Quarters for Conservation, a program by which 75¢ of every Zoo admission is allocated to conservation. Annually, Quarters for Conservation raises half a million dollars for conservation partners around the world.