Since he arrived in May 2016, Goma, Cheyenne Mountain Zoo’s 28-year-old silverback Western lowland gorilla, has been working to incorporate with the gorilla troop of four females, Juju, Roxie, Asha and Kwisha. With a focus on providing an environment which helps all of the gorillas feel safe and in control, keepers are beginning to see promising interactions.

Goma came to CMZoo on a breeding recommendation with one of the females, but the gorillas need to live as a cohesive group before bringing any offspring into the mix, so the females who are young enough to conceive take oral contraceptives for the time being.

Although introductions have been somewhat unusual and challenging, CMZoo keepers and staff continue to stay flexible and seek new ways to provide an environment that promotes positive interactions between Goma and the female gorillas. Goma, who lived with another male gorilla for about 20 years at his previous home, seems to prefer alone time more than most other male gorillas. Staff are working to set the stage for Goma to discover that life with females could be a desirable situation for him.

“He seems to like his peace and quiet, and doesn’t seem like he’s fully convinced about how these ladies can bring him value,” said Dina Bredahl, senior lead keeper in Primate World, who has worked with the primates for nearly 20 years. “We’re figuring out what’s valuable to him, as an individual. He seems to like it when his behavior and movements influence what the females do and where they go. He likes being dominant and keeping the peace among the ladies. We’re looking for opportunities to help him understand that he can have those things, as an integrated part of this group.”

Allowing Goma to have his solitude while providing opportunities for him to adjust to life as a troop with the females is a delicate balance that requires respectful patience for their process. Keepers follow the gorillas’ lead, by collecting and discussing data on the gorillas’ behavior during introductions and adjusting what they do based on that information so the introductions are as calm and safe as possible, for all involved.

Summertime in Colorado is the best time to work on gorilla introductions, because it allows the gorillas into indoor and outdoor spaces. They have more space to be together if they want to be, while having options to be away from each other. 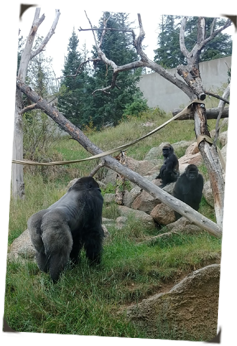 “We do introductions based on their behavior,” said Bredahl. “If it seems like they’re acting unusual or uncomfortable, we will give the gorillas the option to separate in their respective spaces for the rest of the day and will try again the next day.”

When they’re separated, the four females live together peacefully with Goma nearby next door, where they can still hear, smell and see each other. When they’re together, keepers have found it works well to open the doors to all indoor spaces and the outside exhibit. When the gorillas have had enough time together, they have ways of letting the keepers know.

“We know these gorillas well and can usually tell if they’re feeling confident in a situation,” said Bredahl. “Sometimes Goma will move into his favorite habitat or room and pull the door closed behind him, like he’s saying to us, ‘Okay, I’m done now.’”

If a female feels uncomfortable with Goma’s presence, she will make an alarm call, which the other females respond to by defending the female who called. When keepers see this, they monitor the scenario and, depending on the situation, might encourage the troop to separate. This year the gorillas have resolved their few conflicts on their own, without staff intervening.

The list of space options and troop member combinations keepers have presented to the gorillas during introductions is exhaustive. The goal, for now, is to see the gorillas sharing a space and displaying calm and positive behaviors toward each other.

They’ve tried different combinations of female troop members with Goma, in hopes that he would feel less overwhelmed by the interactions. Barriers are placed a few feet back from the gorilla exhibit during introductions to prevent guests from going up close to their spaces, which could distract them. Keepers have found that gorillas with full stomachs tend to display calmer behavior, so they make sure the troop members have eaten well before they spend time together. They’re careful about which foods are available to them during interactions, so there’s no perceived competition among the gorillas over a favorite food item. They also have ways of letting the gorillas know what is about to happen, so the gorillas are prepared to share space when introductions begin.

This summer, with all troop members present and all of their spaces available, CMZoo staff members have seen some encouraging progress, especially between Asha, a 26-year-old female, and Goma. The two showed more promise of making a connection last year during introductions than any of the other troop members and Goma.

“We’ve been working to build on positive things we’ve seen them doing together,” said Joanna Husby, Primate World animal care manager. “We’ve seen Goma building nests, and sleeping and eating while he’s with the girls, which means he’s relaxed and comfortable around them. He’s learning how to communicate, how to lead fairly and how to accept it when the girls aren’t receptive to him.”

While these introductions are taking longer than keepers initially anticipated, they’re aware of other successful gorilla troop integrations that have taken longer. CMZoo is working with its gorilla breeding recommendation partners to keep them apprised of how things are going.

There is a point at which, if the troop hasn’t accepted Goma, organizations involved will have to make a decision about whether to continue making attempts. For now, keepers will continue providing these opportunities for the gorillas to form a cohesive troop together, and they view the progress of this summer’s introductions as a positive indication for what’s to come.