When you think of vultures, chances are you don’t picture heroic, beacons of hope contributing to a strong and healthy ecosystem. That’s because vultures sometimes get a bad rap in our society, often depicted negatively due to their scavenger status. Cheyenne Mountain Zoo has been supporting vulture conservation in various ways since 2009, including currently as a Quarters for Conservation (Q4C) animal beneficiary. Senior Lead Keeper, Jenyva Fox, has been hard at work changing the way guests perceive and understand vultures – in part by organizing International Vulture Awareness Day (IVAD), celebrated annually at CMZoo, on the first Saturday in September. This year, vulture keepers will host activities from 10 a.m. to 2 p.m. on Saturday, Sept. 7.

“The foods that vultures eat, including decaying carcasses, may not be the most appetizing to us, but they are still very important members of the animal kingdom,” said Fox. “The message we try to share with guests is that vultures are the MVPs of keeping our environment clean and safe from the spread of diseases.”

This message is a bit easier to convey when you have three charismatic and interesting vultures to serve as animal ambassadors, helping to educate thousands of guests every year. Fox, along with a team of other keepers, cares for two African Cape vultures, Godric and Hedwig, and Nesher, a Eurasian griffon vulture.

Situated atop new perching that overlooks African Rift Valley, these three raptors survey both guests and animals alike during the warm months of the year. Godric, a 5-year-old male, is curious and friendly.

“Godric loves to swoop into the zebra yard during training sessions, just to check in on the keepers and see what we’re up to,” Fox said. “He’s developed a real bond with us since he arrived almost two years ago.”

“Hedwig is known for her confidence in the giraffe yard,” Fox said. “She’ll walk among the giraffe, bathe in the waterhole and has even found a great perching spot on top of the giraffe statue in the main yard.”

Nearing 30 years old, Nesher, on the other hand, prefers her routine, opting instead to hang back along the Safari Trail, in a more private location below the Zoo’s main road in African Rift Valley.

“Nesher was hand-raised by vulture conservationists in Israel, so she feels right at home with people,” Fox said. “This could explain why her favorite pastime is people-watching. If you want to see Nesher, your best bet is to walk along the new stroller ramp and look down. You’ll most likely find her looking up at you from that rocky, shaded space.”

Developing connections with Godric, Hedwig or Nesher makes it easier for guests to learn about the contributions vultures make in the natural world. These misunderstood and disparaged birds are nature’s clean-up crew, largely helpful in preventing the spread of disease. Their unique appearance and adaptations serve a greater purpose.

Their iconic bald heads actually prevent bacteria from sticking to their skin, an important adaptation for such a mobile animal. Preventing the spread of bacteria is key when you’re a vulture, which is why some species urinate on their own legs, killing carcass bacteria in the process. No need to panic if you get up close to a vulture, though, because they also bathe regularly – both in the water and the sun. The UV rays from the sun kill the pathogens in their feathers after feeding.

“The thing that makes them the most amazing is that they have very strong stomach acids that kill diseases and bacteria in the food they eat,” said Fox. “This is why they don’t get sick like other scavengers could.”

Sadly, all of these physiological tools aren’t enough to overcome poisoning, which is the species’ largest threat to survival. Misconceptions about vultures, such as being mystical, fortune-telling beings, are partially accountable for vulture poisonings. Ironically, it’s their very scavenger nature that most often leads to their death. Vultures’ very presence points rangers in the direction of animals that have recently been poached. In an effort to hide their misdoings, poachers will poison the carcasses to try and stave off the rangers.

Through the eyes of a conservationist like Fox, saving vultures is closely linked to saving several other endangered or critically endangered species. Efforts to protect these animals in the wild are, therefore, especially vital. This is why CMZoo has joined forces with the AZA African Vulture SAFE (Saving Animals From Extinction) program and the Vulture Conservation Program, commonly known as VulPro. 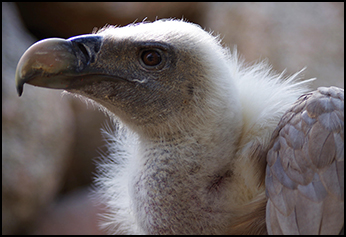 SAFE programs are made up of Association of Zoos and Aquariums (AZA)-accredited member organizations that help facilitate and guide united conservation efforts for several endangered species, including elephants, giraffe and orangutans. The vulture SAFE program hit the ground running when it got its start in 2018 and hasn’t stopped since. In comparison to other SAFE programs, the African vulture effort is unique in that it works to conserve six species, as opposed to a singular one. This is because all six species of vulture face very similar threats to survival, so strategies that help one species can also help the other five.

VulPro, a field partner of the vulture SAFE program, helps address captive breeding and reintroduction of vultures, as well as the rehabilitation of injured or poisoned vultures. The Zoo has supported vulture conservation by supporting VulPro for over a decade now, contributing nearly $90,000 to the South African non-profit over the years.

Before becoming a member of the African Vulture SAFE steering committee, Fox was heavily involved in raising awareness for these often misunderstood birds. One way she built excitement for vultures was by helping to establish International Vulture Awareness Day (IVAD), and bring the program to Cheyenne Mountain Zoo. The international celebration began in 2009, and has been celebrated right here in Colorado Springs ever since.

“We started celebrating IVAD before many other animal celebration days were in the works,” recalled Fox. “IVAD was around before World Lion Day or World Elephant Day. When the celebration began, the idea of having one day a year focused on one animal’s conservation was relatively new to the Zoo world. IVAD became a necessity because these birds were in trouble, and we didn’t (and still don’t) have a beloved children’s character or even a well-known or respected animal at the helm. People weren’t as interested in saving them.”

From the beginning, Fox knew this would be an uphill battle. Luckily, the mountainous landscape at the Zoo prepared her for such a challenge. She decided the best way to get people interested in vulture conservation was to lean into the preconceived notions about vultures that people already had. IVAD activities, such as making “vulture vomit” and hosting “scavenger” hunts quickly became crowd favorites, especially among the younger visitors.

“Taking vultures’ traits and characteristics and making them into fun activities is a way to grow appreciation for vultures and what they do for us,” Fox said. “Every September, I’m just amazed at how many kids are excited to learn about vultures. Each year, people are more aware, and actively look for them in the exhibit. That’s something that never used to happen. I think part of what’s spurred this increased interest is their inclusion in the Q4C kiosks down at the admissions plaza. It warms my heart to think that we’ve been able to inspire others to care about and want to protect vultures.”

This year, Fox and other keepers will host the 11th annual vulture celebration on Saturday, September 7 from 10 a.m. to 2 p.m. in African Rift Valley and Encounter Africa. Guests can expect the same hands-on activities they have grown to know and love, like vomit-making, stomach juice experiments and condor “surgery.” Our own vultures, Godric, Hedwig and Nesher, will be there, of course, ready to leave kids of all ages in awe of the many wonders vultures provide our ecosystem.