Cheyenne Mountain Zoo’s orangutans are having a swingin’-good time, thanks to a newly renovated exhibit. Several new features take them to heights they would frequent in the wild.

The new structures and features, including new platforms, hammocks, tree structures, sway poles and fifty-foot-long ‘vines’ constructed of fire hose, overlook the city of Colorado Springs from above the main Zoo parking lot. Primate World keepers teamed up with the CMZoo horticulture and maintenance crew to bring this dream habitat to life. It’s designed to keep our orangutans stimulated, strong and enriched.

“We knew we wanted an area that would provide them with opportunities to mimic wild orangutans’ natural behaviors in forests,” said Eleanor Knox, Australia native and Primate World senior animal keeper. “It’s really exciting that we’ve been able to create a space with structures that allow them to climb high, jump, swing around and relax.”

Young orangutans, like almost four-year-old Bornean orangutan cutie Ember, have a lot of energy and like to jump, climb and swing, while mature males, like her dad Tujoh, like to spend time resting and relaxing outside. The design that the team put together allows the CMZoo orangutans to enjoy all kinds of activities.

“Our main goal was to get them up off the ground so they can move around like they would in the wild,” said Knox. “In the forests in southeast Asia, most orangutans stay up high in the trees. Our group of new bright green sway poles mimics large bamboo forests. Orangutans will climb up them and move around between them. They’ll even use their two sets of ‘hands’ to climb up high, while holding on to two different poles.”

“Another cool feature in the new orangutan yard is the feeder ball,” Knox said. “Orangutans are capable of climbing way up high and hanging down precariously to get their food. Having four ‘hands’ makes it easy to do that.”

The vibrant yellow and green feeder balls are hollow spheres with various-sized holes through which the red apes can retrieve their snacks. One of the feeders hangs from cable at the end of a twelve-foot-high pole with a four-foot curved end.

“It’s another piece of the yard that’s mentally and physically stimulating for them,” Knox said. “That’s the way they’d get their food in the wild. They can climb up high, swing or climb past the curve at the top of the pole and reach down to retrieve the snacks we put inside the ball.”

It’s not all swinging, jumping, trapezing and climbing, though.

“They spend a lot of their time lazing around. Especially our big males,” Knox said. “They’re not super active by nature. You wouldn’t think it watching our ‘wild child,’ Ember, but orangutans have one of the slowest metabolisms next to sloths.” 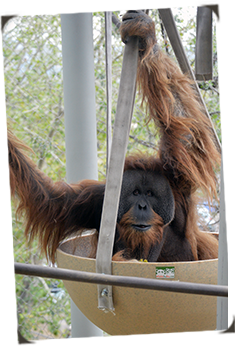 Along with the fun spaces intended for high-energy activities, the team incorporated several composite decking platforms, hammocks and relaxation spaces to accommodate the orangutans’ much-needed down time.

“We found a big sphere and cut it in half, then attached some fire hose to make a dome swing,” Knox said. “Our big Bornean orangutan male, Tujoh, loves it. He lounged in there for a good while the other day. Hadiah [Ember’s mom] has had a go in it, too, and they just kind of relax and hang out.”

Sumatran orangutan Sumagu also seems to enjoy the new exhibit. Keepers say she and her baby Kera enjoyed one particularly sunny platform so much, they were starting to think Sumagu had decided to move in permanently.

Before turning it over to the orangutans, Primate World keepers tested the area.

“We had a bit of a practice and tested out the new yard activities ourselves,” Knox said. “All of the bolts and connectors have to be super locked down because they’re so smart that they’ll undo whatever they can. We have to make sure it’s all tight. We had good fun out there.”

The new habitat means orangutans will get to participate in new behaviors and demonstrations, which the orangutans have already started learning.

“They’re starting to learn a bunch of new behaviors that we’ll be able to share with guests during demonstrations when the weather warms up,” Knox said. “We’ll be highlighting all of their natural behaviors, like climbing and doing big ‘Tarzan swings’ to show what they’d do in the wild. They can go up on the high platforms, grab onto a piece of hanging fire hose ‘vine’ and off they go.”

Cheyenne Mountain Zoo orangutan enrichment trainings and demonstrations take place every day at 11:30 a.m. and 2:30 p.m. Knox says on warm winter days, they’ll be practicing their new moves for everyone to see.