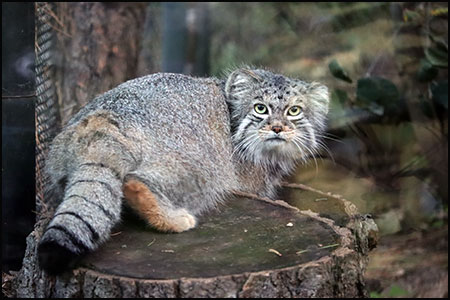 Winter is a season of opportunity for Cheyenne Mountain Zoo’s Pallas’ cats, 3-year-old female, Nancy, and 3-year-old male, Bo. The two Asian Highlands residents are often referred to as the original grumpy cats because of their intense stares, furrowed brows and downturned mouths. Their unique ears sit on the sides of their fluffy round faces, which could also give the impression they’re holding their ears back – a behavior sometimes associated with irritation with other cats. But, their appearances don’t actually mean they are grumpy!

Nancy weighs just seven pounds and Bo tips the scales at 10 pounds. Don’t let their small size and adorable fluffiness fool you. The petite Pallas’ cat commands respect. They’re mesopredators, which means they prey on smaller mammals and are preyed upon by larger predators. That middle-of-the-food-chain status requires them to be skilled hunters and defenders.

“Part of the Pallas’ cats’ defense is how elusive they are,” said Basia Dann, Asian Highlands keeper. “Their innate wariness makes them difficult to study in the wild, which can hinder conservation opportunities.”

Pallas’ cats in human care could one day contribute to a dwindling species in the wild. CMZoo supports Species Survival Plans (SSPs) managed by the Association of Zoos and Aquariums (AZA), which focus on species whose populations are either decreasing in the wild or whose assurance populations in human care need genetic diversity and growth, like Pallas’ cats. Based on SSP breeding recommendations for matching the most genetically diverse animals, and based on the animals’ interactions with each other, animal care teams work to provide environments that give CMZoo animal ambassadors the choice to breed and contribute to the future of their species.

CMZoo’s Asian Highlands team hopes to contribute to Pallas’ cats’ assurance population by supporting Bo and Nancy’s breeding recommendation. Bo came to CMZoo with his brother, Tate, in December 2017. Nancy joined Bo on a breeding recommendation in March 2018, when Tate moved to another AZA-accredited organization. Bo and Nancy were introduced about a month after she arrived. They were immediately comfortable together and have been seen breeding in the past. But, successful Pallas’ cat breeding requires a lot more than congeniality.

Changing seasons impact us all. For Pallas’ cats, they set in motion a whirlwind of important annual hormonal changes.

“Their opportunity to breed successfully typically takes place from December to March,” said Dann. “Female Pallas’ cats are usually only fertile for a maximum of 46 hours per year, which is really short compared to other cats and animals. We work with them all year long to give them the best chances at breeding when the very limited time is right.”

Leading up to winter solstice, when days slowly begin to get longer, Asian Highlands keepers work to make Bo and Nancy’s environment as natural and undisturbed as possible. Estrus, the short period of time that the female is receptive to male breeding, is typically triggered by lengthening days. If breeding occurs but isn’t successful, female Pallas’ cats have been known to go into estrus once more in the same season. But it would be a month later, only if still within the December-to-March timeline.

Voluntary husbandry training is a year-round focus for the keepers and cats. Keepers are continually thinking about what’s next. Part of the reason for building a trusting relationship with Nancy is in preparation for kittens. If the pair is successful, kittens could be here as soon as March. With that short timeline in mind, keepers need Nancy to trust them before she’s pregnant, in case she or any kittens need medical intervention. Pallas’ cat gestation is only 66 to 76 days, so potential kittens would likely be born before Nancy even shows signs she’s pregnant.

Pallas’ cats typically have two to five kittens per litter. This would be Nancy’s and Bo’s first adventure with parenting. Other than breeding, Pallas’ cats are typically solitary in the wild, and fathers don’t usually play a role in raising kittens.

Be sure to stop by Asian Highlands next time you’re at the Zoo to visit Bo and Nancy!