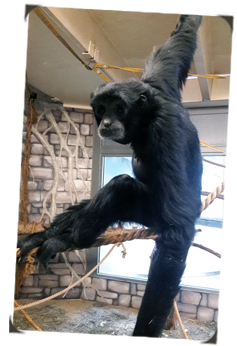 Eve is a vocal, active, seven-year-old female siamang gibbon who lives in Primate World at Cheyenne Mountain Zoo. She came to the Zoo nearly two years ago, as a non-breeding companion partner for Wayan, who is 11 years old. Now, she is adjusting to another major life change, and is demonstrating her species’ resiliency, once again.

When she arrived, she was shy and unsure. Through naturally developing into an adult, building trust with her keepers and bonding with Wayan, she has become the dominant partner, as female siamangs often are.

Eve and Wayan didn’t warm up to each other right away. After months of introductions, one day keepers noticed them swinging and singing together on either sides of their glass barrier – in place to give the two siamangs space and time to acclimate to each other. Seeing this promising interaction prompted keepers to open the door between them.

“They bonded pretty immediately from that point, grooming each other and singing duets together,” Dina Bredahl, CMZoo Primate World animal care manager said. “Forming that great bond with Wayan helped her become a confident animal.”

In early March 2019, keepers noticed normally-active Eve was not using her left foot or leg. Under anesthesia, CMZoo vet staff did a comprehensive exam including radiographs, and determined she needed immediate and extensive treatment.

That same night, Dr. Matt Johnston, Dr. Rebecca Webb and Dr. Sarah Marvel, from Colorado State University Veterinary Teaching Hospital, joined our vet team for an after-hours surgery that saved Eve’s life. Surgeons and staff decided Eve’s only chance at recovery would unfortunately mean her leg would have to be amputated. During surgery, they discovered a blood clot in her left femoral artery. The blood clot was blocking circulation from the mid-thigh down, causing irreparable damage to the tissue in her leg and foot.

As with humans, there are many possible causes for a blood clot in an animal. Unfortunately, there’s no way to know a blood clot is present until immediate action needs to be taken. After 12 days of recovery, Eve rejoined her exhibit partner Wayan, and the two of them have reunited well.

“It has been incredible to see how quickly she’s adjusted to her new situation,” Bredahl said. In the video accompanying this article, Eve can be seen swinging through her indoor and outdoor exhibits with finesse.

Lesser apes are extremely resourceful and resilient. Other organizations that house gibbons that have lost limbs have observed that they still have an excellent quality of life.

Animals don’t seem to suffer the emotional trauma that humans sometimes suffer associated with this kind of change, and will quickly find new ways to navigate their environments and thrive when they lose limbs.

The two gibbons sleep cuddled up together every night. The two nights she was back in her exhibit, but still separate from Wayan to make sure she had recovered adequately and was taking her medications, they slept together on either side of the mesh ‘howdy door.’ Just like during their initial successful introduction, they began swinging and singing together on either side of the glass. When keepers witnessed that, they knew it was time to bring the two back into the same space.

“For about the first 30 minutes, Wayan seemed unsure of her. Her new modes of mobility and the fact that she’s shaved from the surgery probably contributed to that,” Bredahl said. “After a few moments, Wayan was fine if she came and sat with him on the big platform, but in other places in their exhibit, he wanted to ease into the reintroduction more.”

For primates, the more dominant partner receives the most grooming. The more submissive animals groom to appease them and show them respect. Wayan and Eve have already adjusted to Eve’s new way of life, and Wayan is picking up right where he left off.

“She gets most of the grooming,” Bredahl said. “The only difference is that he grooms mostly her head and shoulders now. She’ll lie down and he sits next to her on a platform and will groom her from anywhere from five to 30 minutes. It’s relaxation time.”

One thing that hasn’t changed is her interactions with people. Despite experiencing unfamiliar examinations in unfamiliar settings during her recovery, which can be detrimental to animals’ relationships with their keepers, Eve’s trust in her Primate World keepers is reestablishing quickly.

Eve can be found swinging through her exhibit with Wayan in Primate World, where guests can visit her any day of the week.