In early December 2019, four staff members from Cheyenne Mountain Zoo will travel to the Andes Mountains of Ecuador for an important conservation expedition to help save critically endangered mountain tapirs.

Their prehensile noses with long snouts, odd-and-even-toed hooved feet and furry, bear-shaped bodies make this unique species look like something out of a children’s book. It’s not surprising that CMZoo’s mountain tapirs, 25-year-old female, Carlotta, and 16-year-old male, Cofan (pronounced co-FAWN), steal the hearts of just about everyone who meets them. Carlotta and Cofan are two of only seven mountain tapirs in the U.S.

Found in Columbia, Ecuador and the far north of Peru, it’s estimated that only 2,500 mountain tapirs remain in the wild. CMZoo is one of two zoos in North America that this species calls home. This project has already yielded important information regarding the health, behaviors and territory of mountain tapir, about which relatively little is known. The team documents wild tapir measurements, reproductive trends, biometrics and geographic data. The studies are vital in proving which areas of wilderness need protection and are important in learning about how to best care for them, if this species is to survive.

Mountain tapir in Ecuador are threatened due to loss of habitat from natural gas exploration, expanding cities, agriculture, and potential traffic accidents, due to a growing human population. One goal of the ongoing conservation efforts is to equip policymakers with complete data they can use to encourage finding compromises that protect tapir without hindering the economic and infrastructure progress being made in the country. 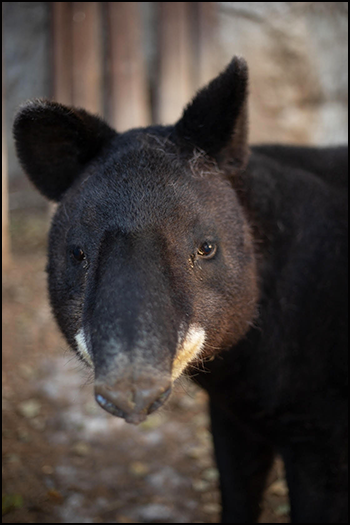 “Their native habitats are being developed for pipelines, mining and agriculture. The tapirs living in those areas are considered a nuisance,” Salido said. “One morning we were there on a previous trip, it took only a matter of hours to see the difference in habitat destruction going on in the forest. Seeing their habitat destroyed in front of my eyes made our work that much more important to me.”

The team is dedicated, and with such physically demanding tasks ahead of them, it’s a good thing.

“It’s incredible to be able to see these animals in the wild, where they live natively in elevations between 6,000 and 12,000 feet,” said Salido. “Part of what makes it rewarding while we’re in the field is how difficult it is to find them.”

Carrying their research equipment on their backs, the team hikes with local guides and partners from the Smithsonian and ABF for hours through high-elevation mountain forest terrain. Once they locate an animal they can briefly capture (they are careful not to capture mothers with calves because there’s a risk the calf will be permanently separated from its mother), they have minutes to anesthetize the animal and gather as much information as they can.

“Unfortunately, these wild animals don’t know we’re here to help, so they can see us as a threat,” said Salido. “A threatened tapir instinctively retreats to water, which means we’re often trying to keep them out of the water before we can assess them.”

The average female tapir weighs about 400 pounds and males generally weigh about 30 pounds less than females.

“We have to attach ropes to the tapir to prevent it from wading into water as it’s waking up, and then detach them once we see it has fully recovered and won’t be in danger in the water,” said Salido. “We only have minutes to measure and document their size and other morphometrics, take blood and fecal samples, attach the GPS collar and administer the anesthesia reversal. Then, we’re monitoring to make sure the tapir is stable and ready to be released.”

The research is critical, given the limited number of animals left in the wild and the lack of available data about them. In addition to collecting data, this year, they’re expanding their efforts with an education component. The team will visit a local Ecuadorian school to talk with them about tapirs, hoping to inspire the next generation of local conservationists to take pride in this local, rare species and to take steps to protect them.

“We’re really excited about the education opportunities we have on this trip,” said Salido. “Tapirs need more local advocates, and part of the challenge is that there’s very little local pride in this awesome species. We hope that once people learn about tapir, they’ll appreciate and want to protect them the same way that we do.”

The team will spend nearly three weeks tracking tapir and raising awareness about them in their native country. CMZoo will post social media updates as the team has opportunities to relay progress from the field.