Four kits and four adult black-footed ferrets (BFF) are one step closer to life in the wild, thanks to the Cheyenne Mountain Zoo conservation team. In mid-September, the ferrets were moved to a preconditioning center outside of Fort Collins, Colo., where they’ll spend about 35 days in a semi-controlled environment. During this phase, biologists observe the ferrets to ensure they can hunt, avoid predators and shelter themselves to survive without human intervention and continue to increase the endangered species’ population when they’re introduced into the wild.

With their black and white bandit-mask markings, inquisitive expressions and fluffy fur so similar to their adorable domestic cousins, it’s easy to assume the black-footed ferret is another one of North America’s plentiful wild small mammals. But, this is the only ferret species naturally found in the wild on this continent – and it was recently thought to be extinct.

During the western frontier exploration in the early 1800s, cargo ships from Europe and Asia brought sylvatic plague to North America. The spread of this disease, combined with poisoning and eradication programs led by newly settled farmers and ranchers, who saw prairie dogs as pests, drastically reduced the prairie dog population. Because prairie dogs are black-footed ferrets’ main food source, the BFFs’ population declined dramatically. By the 1980s, black-footed ferrets were thought to be extinct.

Since the 1981 discovery of a small population of BFFs in Meeteetse, Wyoming, conservationists launched a black-footed ferret recovery plan which continues to increase the population. Numbers fluctuate, but recent reports estimate 350 BFFs are thriving in the wild, thanks to this program.

Preconditioning is the final program stage for these born-to-be-wild individuals, and Jeff Baughman, CMZoo field conservation coordinator, makes it his life’s work to prepare them to thrive without relying on humans. 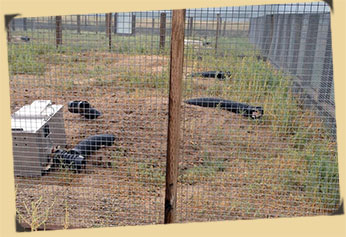 “We limit the human interaction as much as we can,” Baughman said. “We feed them and keep them healthy and clean while they’re with us, but other than that, we try not to let them hear or see us very much. Wild animals need a healthy fear of humans, so they’re not tempted to get close.”

From weekly lighting adjustments to reproductive monitoring and only four breeding opportunities (once per year, for four years) to pair a compatible couple to conceive, the intricacies of black-footed ferret breeding success are meticulously managed by the CMZoo conservation team. Cheyenne Mountain Zoo is one of only five zoos in the world supporting the black-footed ferret species survival plan, with partners at Toronto Zoo, Louisville Zoo, Phoenix Zoo and Smithsonian Conservation and Biology Institute along with the USFWS National Black Footed Ferret Breeding and Conservation Center just outside of Fort Collins, Colo.

“Some people wonder why we invest so much energy to saving this species,” Baughman said. “They’re not just cute; they’re vital in helping secure healthy prairie ecosystems. BFFs are predatory prey, so their environmental role is to help control prairie dog populations while occasionally being a food source to owls, coyotes and badgers. BFF reintroduction sites are managed for plague which keeps the prairie dog populations healthy. This safeguards all of the other prairie species that rely on prairie dogs (a keystone species) as well. Black-footed ferrets are rare and important because they serve the ecosystem up and down.” 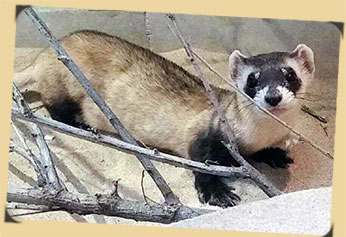 The black-footed ferrets at Cheyenne Mountain Zoo are being born and raised for genetic assurance of the Species Survival Plan population with about half of the offspring being allocated for release into the wild.

Although the BFF conservation area isn’t open to the public at CMZoo, visitors can still experience one of these endangered, beautiful creatures at The Loft. In 2015 after the age of four (when BFFs’ reproduction windows close), Sylvester came to the Zoo from the National Black-footed Ferret Conservation Center as he was a great candidate for being an educational ambassador.