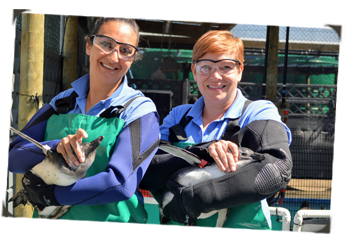 SANCCOB rescues penguins, provides medical care, incubates eggs, hand rears chicks, helps park rangers monitor penguin colonies on nearby protected beaches, and provides education to the public. In the case of an oil spill, they provide disaster relief by cleaning, rehabilitating and releasing the birds back into the wild.

Originally, Cheyenne Mountain Zoo members voted in 2016 to allocate funds to support SANCCOB in the event of an oil spill. Annually, CMZoo membership registrations contribute $25,000 to Quarters for Conservation and $75,000 to grants like this one. Members help us select the grant recipients each year.

Luckily, Cape Town has not had a major oil spill in more than two years, so this winter SANCCOB asked if the grant could be used to help during the busy penguin chick season. In addition to sending our team, our Zoo was also able to provide $6,500 to SANCCOB to help with rehabilitation and reintroduction of African penguins.

African penguins are endangered, with multiple factors negatively affecting their populations. One issue affecting African penguins in South Africa is unusual molting patterns thought to be caused by climate change. Rising temperatures and changing ocean currents are causing adult penguins to molt during chick season, which means they’re no longer waterproof and are susceptible to hypothermia in cool ocean waters. Some have to turn back without providing food for their families. 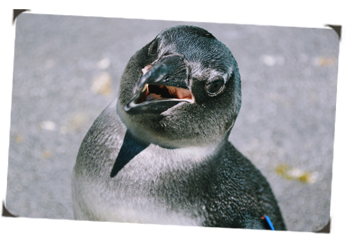 Adding to their vulnerability in the cool waters is the need to swim further for food. Overfishing is contributing to the decreasing supply of fish that penguins can hunt in the wild. Adult penguins raise their chicks in pairs, so while one parent stays with the chick or egg, the other parent goes out to fish and hunt for their food. With a dwindling food source, the hunting penguins must travel further to find fish, leaving the parenting penguins without food for lengthy periods. This extended wait sometimes causes the mate caring for the chick to respond as if the hunting parent is not going to return. The parenting mate will often have to abandon the chick to find food.

To prepare food for the penguin chicks, Piper and Wallace thawed and counted Cape sardines and made a ‘fish formula’ comprised of pureed sardines along with several vitamins for weight gain, feather development and overall health. They measured medications and mixed them into fish formulas, then tube-fed the birds multiple times daily.

“We gained valuable knowledge in the chick rearing process, which will come in handy as we have chicks of our own in Water’s Edge: Africa,” said Wallace. “We learned everything from formula recipes and feeding techniques to assessing feather quality.”

Since they were caring for birds at different stages of life, and with varying health, they also fed whole fish, applied topical medications, administered breathing treatments with a nebulizer and monitored the birds in swimming areas according to how waterproof their feathers were.

“The healthier the penguins got, the feistier they got,” said Piper. “That’s one way we knew we they ready to make their way back into the wild.”

Ultimately, the quality of waterproof feathers determines their release date. Penguin chicks have fluffy feathers that don’t protect them from cool ocean water temperatures, so they eat and exercise at SANCCOB until they mature enough to fend for themselves in the wild. 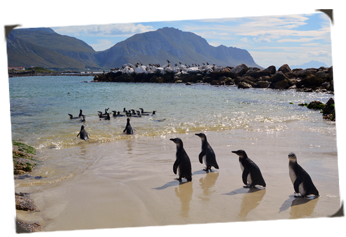 “During our two weeks at SANCCOB, more than 50 penguins were released back into the wild,” Piper said. “The day we went on the release, there were 24 penguins. We arrived early in the morning and prepared them for their journey by removing tags and attaching tracking devices. Then, we packed the penguins into cardboard crates and rode for nearly two hours in the back of a truck with them until we arrived at our final destination, Stony Point Colony in Betty’s Bay, Western Cape.”

When Piper and Wallace arrived at the bay, which is protected from any kind of fishing to ensure the penguins have food nearby, they saw hundreds of adult penguins and even some thriving chicks.

“We met up with park rangers and carried the penguins to a beachy area where we unloaded all 24 penguins and watched them make their way out into the ocean,” Piper said. “Some were eager to get back to the ocean and others needed a little nudge in the right direction and off they went. It was a beautiful sight to see the chicks we had worked with for the last few weeks set off into the beautiful bay full of wild penguins in a protected area.”

Thanks to CMZoo members, Cheyenne Mountain Zoo was able to provide support for SANCCOB and African penguin chicks during this fragile phase of life that is so vital to the well-being of their species.

“Penguins are such amazing animals,” said Wallace. “Being a part of this experience was a defining moment in my career, and I feel even more prepared to welcome and care for CMZoo’s flock of African penguins, and share what I learned from the awesome team at SANCCOB.”

You can meet a flock of African penguins for yourself, when CMZoo’s new flock joins us at Water’s Edge: Africa, scheduled to open in phases throughout summer 2019.