The Giraffe Conservation Foundation (GCF) estimates a little more than 600 West African giraffe remain in the wild today. Although that number seems small, it is a sign of successful conservation efforts over the past 30 years. Only 49 wild West African giraffe existed in the mid-1990s, due to illegal hunting, climate change and habitat loss.

In November 2018, Cheyenne Mountain Zoo’s Vice President of Mission and Programs and head veterinarian, Dr. Liza Dadone, traveled to Niger to assist with Operation Sahel Giraffe. Dadone was part of a multinational, multi-organizational team led by the Giraffe Conservation Foundation in support of the Republic of Niger and in partnership with the Sahara Conservation Fund, with additional assistance from Ivan Carter Wildlife Alliance, San Diego Zoo Global and Cheyenne Mountain Zoo, with involvement from members of the International Union for the Conservation of Nature Giraffe & Okapi Specialist Group.

West African giraffe are a subspecies of northern giraffe. The world’s only remaining population lives about 40 miles southeast of Niamey, Niger, in an area known as the “giraffe zone” – where giraffe are the only large wild mammals coexisting (and competing for resources) with humans.

“There was a lot of local pride and respect for the West African giraffe there,” said Dadone. “The locals felt they were a chosen community to have the last of this subspecies of giraffe anywhere in the world.”

The ongoing goal of Operation Sahel Giraffe is to establish the first-ever satellite population and increase the number of West African giraffe population by relocating giraffe from their sole location in the giraffe zone to Niger’s Gadabedji Biosphere Reserve (GBR), a reserve area conservationists have identified as a site to rehabilitate. West African giraffe haven’t occupied GBR for nearly 50 years.

The need was evident, the plan was in place and the partners were invested. Now, the team of conservationists, government officials, veterinarians, giraffe experts and rangers needed to put the plan into motion. First, they set up the boma – a paddock where the giraffe would stay together for three weeks before their relocation to the GBR. 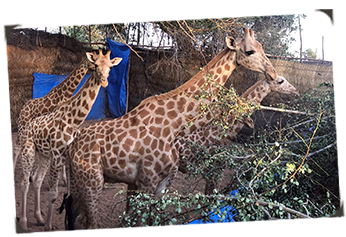 “To contain an animal that could stand 18 feet tall and weigh one ton, you need a very strong, very tall fence,” said Dadone. “It took a large team over a week to dig holes, bring in trees we could use as pillars and build the wall structure.”

Next, they needed to identify which of the 600 giraffe were the best candidates to establish this important foundational herd in the GBR.

“We were trying to find young adult giraffe that were old enough to be independent from their mothers, but not so old that they were fully mature and harder to restrain and move. Ideally, that’s between one and three years old,” said Dadone. “Because you can grow a population faster with proportionally more females, we intentionally sought more females than males. We were obviously seeking animals that appeared to be healthy. Logistically, we needed animals that weren’t located at the far end of the existing population’s roaming area, so they didn’t have to be transported many hours to the boma.”

Then, the team would need to find the right age and sex of giraffe in the wild, anesthetize them and transport them by trailer to the boma, where they could ensure the giraffe were safe, contained, fed, shaded and watered.

There were 600 animals in this area, but it took a lot of work to find them. One day, the team engaged the help of a colleague who flew his ULM microlight over the area to help with spotting giraffe in the large area with limited road access.

“He circled to the herd, then circled back to us and was trying to lead us, but we didn’t have any form of communication,” said Dadone. “At a certain point a Coca Cola bottle with a note in it was dropped from the plane. We drove to retrieve it, and sure enough, the note told us which direction to head toward the herd.”

The team followed the pilot’s message in a bottle and found the herd. At least one of the giraffe met their needs.

“Each time we brought in a giraffe, it was a different experience,” said Dadone. “When we would find a giraffe that met the needs of the project, we referred to a catalogue that identified all of the giraffe by their unique spot patterns. Because of the rangers’ work over many years creating that catalogue, we could identify each individual animal before starting anesthesia.”

Wildlife veterinarian Dr. Pete Morkel, who has led field conservation efforts like this countless times across Africa, led the field anesthesias for the Operation Sahel Giraffe team. He would estimate the size of the animal being targeted and load the anesthesia dart appropriately for that animal.

“These animals have lived in close proximity with humans, so they were less wary of us, which allowed Pete to slowly walk over toward the animal to get into dart range, then dart the animal in the shoulder or rear,” said Dadone. 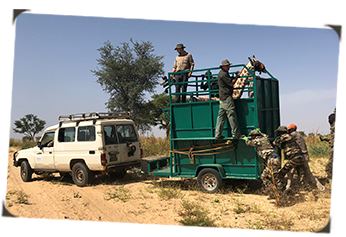 Usually, the animal would stop running and go down on its own, but sometimes the team would have to help it down safely with a series of ropes. Once down, the team applied a blindfold and earplugs to the giraffe, to minimize stimulation and help calm the animal. To avoid potentially harmful side effects of anesthesia, the team immediately administered an anesthesia reversal drug, which would wake the animal within about a minute.

“Any time we’re working hands-on with a species that’s almost gone, we try to make the most of every moment we have,” said Dadone. “During that time, I was able to administer medicines, like parasite treatments, to help minimize the risk of spreading diseases. I also took bloodwork for anesthetic monitoring, which is a long-term project with GCF and other partners to identify which anesthetic combinations are safest and most effective for giraffe anesthesia in the field.”

From those same blood samples, Dadone performed additional research and overall health assessments. While waiting for the giraffe transport vehicle, the team also took measurements, skin samples for follow-up genetic studies and hoof assessments that continue to benefit giraffe in human care around the world.

Once the team loaded the giraffe into the transport vehicle, which was a modified horse trailer, they headed for the boma, where they would introduce the giraffe to the rest of the giraffe selected for relocation and reintroduction. After three weeks allowing the giraffe to acclimate to each other in the boma, the team transported two loads of four giraffe each in the back of long-bed open-top trucks, to release them to the GBR nearly 500 miles away.

The team released eight West African giraffe into the GBR, where GCF now supports a reserve and community based monitoring system to ensure the giraffe thrive in their new home. Giraffe have 15- to 18-month gestation periods, so it may be a few years before any calves are born.

“It’s exciting to get involved with yet another critically necessary project that will ultimately serve as proof that these projects work and can save species on the brink of extinction,” said Dadone. “We have a few years to see how they do, but we’re hopeful it’ll lead to an increase in effort to try to save giraffe in that area and to reestablish more animals in the coming years.”

For more information on CMZoo’s commitment to conservation, visit www.cmzoo.org/conservation.