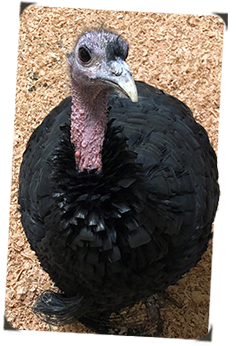 Guests and staff alike are enamored with CMZoo living legend Laredo, a Rio Grande turkey. At nearly 18 years old, Laredo is the oldest documented living turkey in the United States, and probably in the world. The average lifespan of a turkey is between five and seven years.

Despite his unbelievable age, 19-pound, three-foot-tall Laredo’s keepers say he’s in excellent condition. Turkeys have a keel, which is like a human sternum that’s centered in the chest. In healthy turkeys, the keel is surrounded by healthy muscle and fat and protrudes only slightly.

“We can tell he’s healthy because when he chooses to let us do physical assessments, we can feel that area is full and strong,” said Kevin Pellow, animal keeper in The Loft and My Big Backyard. “When a bird starts losing weight or feathers, it’s usually a sign something needs to be addressed.”

People often ask about Laredo’s secret for a long and healthy life, and although we like to joke that corn flakes must be magic snacks, the truth is, Laredo is protected from predators and gets assistance that his wild relatives don’t receive. A stable weight through a consistently available and healthy diet, managed aches and pains, socialization and a beak trim when necessary seem to make up the recipe for a happy turkey life.

“Most birds in human care need some kind of beak trim or beak care about every three months,” Pellow said. “For Laredo, we’ve only had to perform one beak trim ever. It’s a sign that Laredo is interacting with enough enrichment that he doesn’t need help there. It’s a good indicator of how active he still is, which means he must be feeling good.”

Laredo’s need for specialized care is minimal, especially considering his age. He takes medication to help control pain in his legs and feet, which is compared to an ibuprofen for people. Keepers say Laredo likes to take his medicine in mini peanut butter sandwiches or grapes, and that he shows no signs of slowing down. 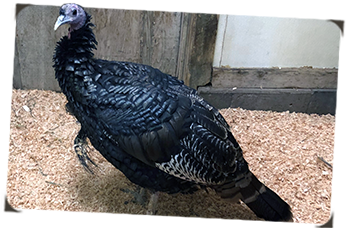 “On a recent snow day, the chickens wanted to stay inside in their coop, so we gave Laredo the choice to go into his yard or into the chicken yard,” Pellow said. “Later, we found Laredo playing out in the chicken yard, stomping in the melted snow and galloping around.”

Laredo’s many admirers in addition to his keepers at CMZoo include Hannah Bragg, CMZoo graphic designer, Donna Greenfield, grants and development officer, and Tiffani Clark, development officer. They visit Laredo as often as they can, and say he has a calming effect on them. A new video of Laredo having a snack or cooing at a chicken brings ear-to-ear smiles to their faces. The descriptors “handsome” and “charming” are used without limitation. It’s clear Laredo has a CMZoo staff fan club. Maybe that’s why Pellow says Laredo might have a little extra appreciation for himself.

“He likes to look at himself in the mirror,” Pellow said with a laugh. “He’s kind of narcissistic that way. He can be territorial, too. It depends on which chickens want to come into his yard, because sometimes he lets his favorite chickens come into his barn, sleep near him and share his food.”

Although he’s somewhat skittish and leery of people, Laredo is a unique animal to visit next time you visit Cheyenne Mountain Zoo.

“If you talk to him softly, tell him he’s beautiful, and act calmly around him, he may let you feed him with help from a keeper,” said Pellow. “We’re working on it.”

Guests can visit Laredo any day of the year in My Big Backyard, near The Loft and Asian Highlands at Cheyenne Mountain Zoo.