CMZoo year-round sponsor, Children’s Hospital Colorado, has created a guide to first-year doctor visits for human babies. Similarly, Cheyenne Mountain Zoo’s experience with our prolific giraffe breeding program, founded in 1954, gives us some great milestones for the first year of life for a giraffe calf. Let’s see how Viv, CMZoo’s giraffe calf born to Msitu in July 2019, compares to the average timelines.

The first day of a giraffe calf’s birth is full of important milestones. Within the first couple of hours after birth, the calf is expected to stand. It usually takes several very wobbly attempts before the calf is stable on those long legs. When calves are born, they drop about five feet from the birth canal to the floor. In human care, a birth stall usually has several inches of sand, hay or shavings on the ground to help cushion that fall. Once the calf has landed, it usually needs to ‘untangle’ its long legs and neck, and then can attempt to stand.

“Viv’s legs were wrapped up sort of like a pretzel when she landed, so it took her a few minutes to get them where they needed to be,” said Jason Bredahl, giraffe animal care manager. “Once she got those straightened out, she was the fastest calf we’ve ever seen take its first steps. She was up and walking within about 35 minutes of being born, and she really hasn’t slowed down since.”

“Viv was on the slower side when it came to getting her first milk,” said Bredahl. “But, Msitu is a great mom, and she and Viv quickly bonded. Once they did, we saw her nursing a lot that first night and throughout the next few months.”

Normally, giraffe calves nurse for about four months without eating any solid foods, like leaves or grain. The average weaning period is anywhere from six months to a year. The baby usually starts investigating solid foods between two and three months of age.

Viv had other plans.

“We started noticing Viv nibbling on browse and being curious about crackers at about a month old,” said Bredahl. “She is still nursing, so she’s getting the nutrients she needs from mom, but at this point, her diet contains a lot of browse, alfalfa, grain and romaine lettuce from our guest feeding opportunities.”

Unless it’s medically necessary, CMZoo staff doesn’t intervene with animals’ births, and has found it’s beneficial to the mother/baby relationship to allow them uninterrupted time together to bond. Since Viv showed all the signs of being a strong calf, staff never took exact height or weight measurements.

On average, giraffe calves weigh between 100 and 200 pounds at birth, and measure about six feet tall.

“We guessed that she was about 200 pounds at birth and stood about six feet tall,” said Bredahl. “Since then, she’s growing and growing. As of the end of October, we estimate she’s about seven feet tall and over 300 pounds.”

The next big milestone for giraffe in care at CMZoo is to start training. Most giraffe calves born at CMZoo participate in behaviors, like shifting from one area to another, by following their mothers. This allows keepers to care for them by relying on training their mothers have received. 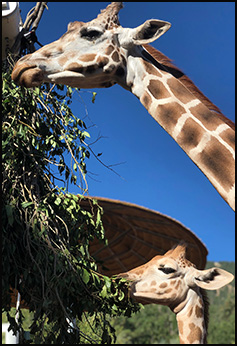 “Viv has been a total firecracker from the very beginning, when she leap-frogged over her mom’s back as her mom was lying down only six hours after she was born,” said Bredahl. “She’s one of the most independent giraffe calves we’ve ever experienced, which is fantastic because she’s such a great ambassador for her species. She’s interested in guests, keepers and the rest of the herd. It also means she’s not necessarily interested in doing what her mom is doing. That makes shifting into the barn from the yard, or vice versa, or moving from one part of the barn to another an ‘adventure’ each day.”

Keepers rely on a calf’s interest in solid foods to train. The food is the positive reinforcement keepers need to encourage positive behaviors from an animal.

“In our experience, we usually start working with calves on trained behaviors at about four months,” said Bredahl. “Viv was a lot younger than that.”

Because Viv took interest in browse, alfalfa and other solid foods at such an early age, keepers started training with her at just a month old.

Keepers will continue working with Viv on her training, which is still largely focused on asking her to move from one location to another. Once she has mastered shifting behaviors, Viv will eventually graduate to more complicated training activities. Like her herd mates do now, she will later have the choice to participate in varieties of training that allow her to participate in her own health care.

“Our giraffe train to have their hooves trimmed and cared for, their blood drawn, their eyes examined, and of course they train to shift in and out of different areas of their yards and barn,” said Bredahl. “Khalid, our breeding bull, even trains to participate in giraffe ‘yoga,’ which helps him stretch and stay limber. Our giraffe training programs help us take great care of our herd. It also allows us to share what we learn and participate in research studies that benefit giraffe in human care and in the wild, around the world.”

(Try to) keep up with Viv and the 16-member CMZoo giraffe herd every day of the week in African Rift Valley at Cheyenne Mountain Zoo. No matter the weather, giraffe feeding opportunities are available to guests daily from 9 a.m. to 4 p.m., either on the outdoor boardwalk or inside the giraffe barn.