Wolf Woods is arguably the wildest place at Cheyenne Mountain Zoo. Seven Mexican wolves, led by 13-year-old matriarch, Luna, roam the expansive yard which was designed to preserve our wolves’ wild instincts as much as possible. As part of the Association of Zoos and Aquariums (AZA) Mexican Wolf Species Survival Plan (SSP), they or their offspring could one day be released into the wild to support those populations. 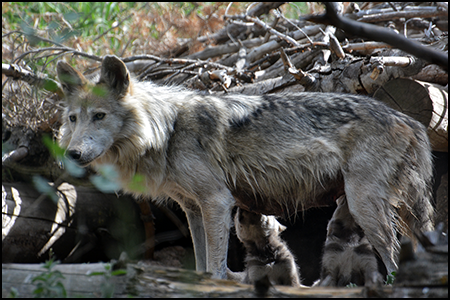 Their exhibit, full of trees, boulders, tall grasses and mountainside terrain, mimics the wolves’ natural habitat, but can sometimes make the elusive species harder to spot.

Usually, it’s brave and curious Luna who leads her pack into view. With her snout to the ground, she trots toward the front of the exhibit with a confidence most wolves don’t possess. The white fur on her face reveals her advancing age, but her intense approach reminds us that she’s a mother on a mission.

“Most guests know we try to keep this part of the Zoo a little quieter, out of respect for the wolves and their species’ survival,” said Kristen Cox, senior animal keeper in Rocky Mountain Wild. “But sometimes we’ll hear excited gasps coming from the viewing area, and we know our Luna just earned another admirer for her species.”

Chances are, if you have seen a wolf at CMZoo in the last five years, it was Luna. She’s by far the bravest wolf in the pack, which gives our guests the opportunity to observe this majestic species and form connections we hope will inspire them to advocate for wild Mexican wolves.

In addition to helping people fall in love with and learn about wolves by making those connections, Luna and her mate, Navarro, have contributed six healthy pups to the Mexican Wolf SSP. Phoenix, Shadow, Bluestem, Hope and Lupa were born in 2018 and Uno was born in 2019. For many years, the Zoo housed a bachelor pack of wolves. Later, the SSP placed various unsuccessful breeding pairs here. Until Luna and Navarro’s first litter, in 2018, it had been 20 years since wolf pups were born at CMZoo.

“She immediately took care of her pups, and knew just what to do,” said Rebecca Zwicker, Rocky Mountain Wild animal care manager. “All of a sudden, she had all of these babies and she was totally comfortable every step of the way.”

Even with five yearling pups and a brand-new pup, when Uno was born in 2019, utterly capable Luna adapted her methods to meet her growing family’s needs.

“To be honest, she does everything,” said Cox. “She’s the mom! When the pups were young, she would bring their meat to them. When Uno was born, she taught her daughters, Hope, Bluestem, and Shadow, how to be nurturing mothers.”

The girls were very curious about Uno. When Uno was a few weeks old, she let them into the den and they would submissively observe her. They also went into the den when Luna went into labor with Uno, and she allowed them to see what was happening. Those experiences will help prepare the daughters as they mature and possibly become mothers one day.

“The ‘alpha,’ ‘beta,’ and ‘omega’ theory on roles in a wolf pack is an outdated perception of wolves’ family dynamics,” said Cox. “They’re more like a family unit, and Luna’s role is caretaker, hunter, protector and leader. As she ages, we’re seeing that dynamic shift a bit.”

Luna has surpassed the median life expectancy of Mexican wolves by two years. Now that she’s older and her offspring are maturing, she’s taking a step back.

“At this point, Luna is still holding court, but she does get tested a bit more often,” said Zwicker. “That’s natural for our wolf pack. Luna is clearly holding her own. She’s still the mama, but she’s letting them grow up, too.”

The pups still look to Luna for leadership. They will even call her to inspect something that makes them unsure. Recently, one of the older pups was seen growling at something above the wolf exhibit. After some tail wagging, barking and stomping at the unidentified object, the pup ran to get Luna, who positioned herself in front of the pack to confront the perceived threat (which was never identified). 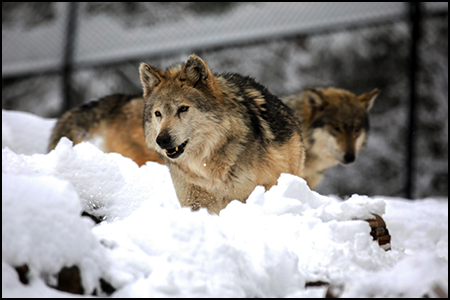 “Luna has taught me to be brave,” said Cox. “She’s always been this mature, well-rounded wolf from the moment she arrived. Because of Luna, I really admire the concept of motherhood. Family is everything to her.”

Recently, Luna’s keepers noticed some stiffness in her hind legs during her daily patrols around the yard. Because the wolves are intentionally kept as wild as possible, they don’t participate in husbandry training that would allow them to participate in their health care – like most animals at CMZoo.

“Because she’s the dominant wolf in the pack and is always the first to eat, we could provide medication in a separate meatball for her, to help her deal with that stiffness if it progresses,” said Zwicker. “We’re keeping a close eye on her and for now, she’s looking good, but we’re realistic about her age.”

Her keepers say she’s running around the yard like a 5-year-old on most days. But, they know the day Luna’s story becomes a memory continues to grow closer.

“We’ll make the most compassionate decision for Luna when that time comes,” said Cox. “Until then, I’m sure she’s going to continue to inspire me – and many others – to do more for her species. She raised healthy pups that could help save their endangered species. But, maybe more importantly, she’s helped people fall in love with wolves. She’s the most outgoing wolf I’ve ever met. Her contributions as an ambassador for her wild counterparts is huge.”

Only about 186 Mexican wolves live in the wild, and only about 300 live in assurance populations in human care. The number of wild individuals has increased, thanks in part to contributions made by SSP partners, by 14 percent in 2020 – its fifth consecutive year of wild population growth.

Until the 1900s, the Mexican wolf thrived throughout central Mexico, Arizona, New Mexico and western Texas. But by the 1950s, the species was virtually eradicated, with the last known wild wolf in the U.S. shot in 1970. When the Endangered Species Act went into effect in 1973, it led to the Mexican wolf being declared an endangered subspecies.

The population of Mexican wolves in human care at AZA-accredited zoos is an important part of the plan to repopulate the species in the wild. The Mexican Wolf Recovery Program is run by U.S. Fish & Wildlife Service, with cooperation from the AZA Mexican Wolf Species Survival Plan. Cheyenne Mountain Zoo has been a participant in the program since 1994.