Seasonal illnesses, like influenza, can wreak havoc on humans this time of year. But, did you know great apes, like orangutans and gorillas, are also susceptible to the flu virus, which impacts an estimated 3 million humans annually?

“The great apes are the most susceptible to illnesses that impact human primates, like you and me,” said Dina Bredahl, senior lead keeper in Primate World. “Any primate at the Zoo can catch illnesses from humans, but the risk is increased for great apes because they’re so similar to humans. Orangutans share 97 percent of the same DNA as humans.” 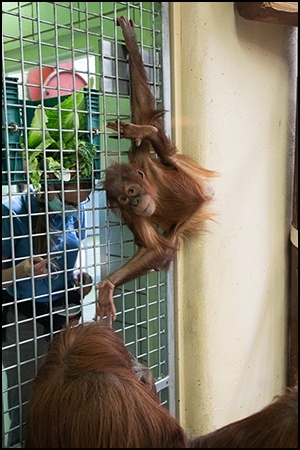 To protect the Bornean and Sumatran orangutans and the Western lowland gorillas at CMZoo, the apes receive the flu vaccine. The flu vaccine is administered by injection, which the Primate World residents train to accept voluntarily. Flu shots are available each fall, but injection training continues throughout the year nearly every day. The training can take months and requires the apes to build upon the trust they have in their keepers. Some of them choose not to participate in injection training, or may not be at a point in their training that keepers feel confident a real injection won’t derail the progress.

“We rely on ‘herd immunity’ to protect the population, so not every single great ape will receive a flu shot,” said Bredahl. “As long as a majority of the gorillas and orangutans receive the vaccine, we drastically reduce their overall risk.”

One example is one-year-old Sumatran orangutan, Kera. Little Kera was at a point in her training that her primary keeper thought a real first-time ‘poke’ might risk a regression in her training. Because the majority of the other primates were further along in training, Kera didn’t receive a shot during the fall flu shot clinic. However, her primary trainer continued training, and Kera has made incredible progress. So much progress, in fact, that she gets excited for the training.

“We’ll use a syringe that doesn’t have a needle, so they get used to seeing the shape and being touched with it,” said Bredahl. “Eventually, we move on to a dull needle, so it looks more similar to the needle we’d use for an actual injection. Kera’s trainer has been so successful that Kera now knows if she presents her hip and then holds still for a moment for the pretend injection, she’ll get a special reward. She presents her hip pretty enthusiastically, which is adorable and impressive since she’s still just an infant!”

“Primate World keepers receive flu shots yearly to protect ourselves and the great apes in our care,” said Bredahl. “We also wear medical masks when we prepare their food or are in close protected proximity to them. We wash our hands constantly and practice good hygiene before and after we handle anything they’ll touch or eat.”