What started in 1969 as a way for CMZoo fans to take a more active and supportive role at the Zoo is now known as a fundamental arm of the organization. This month, the Cheyenne Mountain Zoo Auxiliary celebrated fifty years of important contributions, cultural impact, conservation advocacy and evolution. Two docents, Ellie Solomon and Sally Goldstein, are still active members of the Auxiliary, with fifty years of service and counting. Although the docent organization operates independently from the Zoo, it is a valued and vital part of the Zoo’s success and culture.

“It started as a group of women who wanted to bring an educational aspect to the Zoo experience, which some may be surprised to learn was not the norm at that time,” said Cheyenne Mountain Zoo Auxiliary Past President, Glenna French, who has been a docent for ten years. “Docents are the original Zoo educators.”

The CMZoo docent program is one of the first three established, the only self-regulating program and the third-longest running auxiliary program in the nation.

“If you think about the era when this group established itself, it was a really socially pivotal time,” said Dr. Liza Dadone, CMZoo vice president of mission and programs. “This was a group of women who created a platform through which they could contribute their skills and knowledge for the greater good of animals, children and their community. To this day, they are an incredibly impressive and important part of our Zoo.”

Over the years, docents have embraced changes with grace. One superficial but notable change is the docent uniforms, which have gone from animal print ladies’ long coats and high heels – admittedly subpar equipment for giving tours and doing physical work at America’s mountain Zoo – to recognizable forest green polos, multitools and practical footwear. French and her colleagues joke about how as more men started to sign on as docents, the attire became somewhat of an issue to address. What hasn’t changed, though, is the auxiliary members’ commitment to supporting a Zoo they love.

“Docents have a passion for contributing to the Zoo’s success, whether here at the Zoo or around the world as we support field conservation efforts, financially and through educating and raising awareness,” said French. “We love everything that Dr. Liza is doing for giraffe conservation. Being able to talk to kids about the Quarters for Conservation program, and how when they visit the Zoo, they have a chance to choose which project they want to support is really empowering for them.” 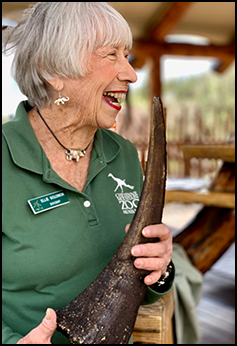 There are two main tracks for docents: tour educators, who lead school and group tours throughout the Zoo; and interpretive educators, who perform educational puppet shows, present biofacts and educate guests at stations throughout the Zoo or on ZOOMobile outings – a program now managed by CMZoo’s EdVenture program, which was founded by docents under the name ‘ZOOM,’ or ‘Zoo on the Move.’

In response to changing times and adversarial situations in our country’s history, CMZoo docents established programs that made education more accessible for their community, like Classroom Safaris. Classroom Safaris started in 1973 as a way to bring the Zoo to schools during an historic gasoline shortage that made field trips unattainable for schools. These days, on-site tours make up a large part of their one million hours of service over fifty years. Docents have given more than 400 tours in the last ten years.

Safari Classrooms now take place before each tour, with docents visiting students at their schools to discuss the lessons they’ll study during their Zoo field trip.

“Tours have grown so much and have become quite complex,” said Charlotte Greene, a five-year docent and CMZoo Auxiliary continuing education coordinator. “We now use state education standards to create tour curriculum, which requires a lot of us as we build our tour plans and deliver on them. However, it speaks to the quality level of education these kids are getting when they come and spend time with us.”

The lessons include biology, environmental studies, taxonomy, anatomy and more.

“The interactions with the children and guests is so fulfilling,” said French. “Watching a sloth on the ropes in Monkey Pavilion and being able to share what we know about them really sparks those eye-opening moments when we know we’ve made an impact.”

Docents also contribute to the Zoo by making animal enrichment. They volunteer a required minimum of thirty service hours per year, in addition to volunteer hours and continuing education courses.

“It’s about connecting our guests with something in the natural world, right here at the Zoo,” said Greene. “Hopefully those connections inspire them with ideas to save our rainforests, learn about and support sustainable palm oil plantations and be more active with conservation.”

Next time you’re at the Zoo, please join us in celebrating half a century with CMZoo docents and thank our advocates in green polos for their tireless passion and support.