Favorable strides in the management of endangered Wyoming toads were made this spring and early summer as CMZ experienced a robust egg-laying season, followed by the release of hundreds of year-old toads into the wild. Wyoming toads are currently listed as “extinct in the wild” by The IUCN Red List of Threatened Species. 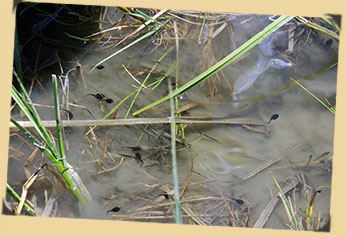 The effort to save one of the most endangered toads in the world has been a bit of a “two steps forward, one step back” process since 1994 when the last known wild toads were brought into human care for future recovery efforts. The threats that caused them to disappear are only slightly curtailed, so various strategies have been employed to help re-establish the population in the wild. Currently, eight zoological and governmental organizations are breeding centers for Wyoming toads. CMZ joined the effort in 1992.

The effort to successfully re-establish Wyoming toads in the wild is basically three-pronged: first, develop fertile egg strands in breeding centers using genetically desirable cohorts (pairs); next, increase the number of tadpoles released into the wild; and third, maintain head-start programs that allow some tadpoles to overwinter at facilities and grow into stronger one-year-olds before being released into the wild. The third prong was added to help increase the survival of toads to maturity and have more breeding in the wild.

“We want to employ all these strategies, as they will hopefully increase the chances of survival for this species,” said Jeff Baughman, Cheyenne Mountain Zoo’s Field Conservation Coordinator. “We need to keep thinking and adapt to what is or isn’t working.” 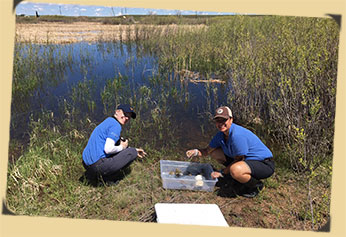 Head-start toads develop from tadpoles hatched the previous year. This year’s breeding season at CMZ began June 4 when, after hibernating for 35 days, 11 pairs of adult Wyoming toads were put together in the breeding center. Nine of the pairs produced fertile egg strands, which included 14,822 eggs! How do we know? Because staff counted them.

“We start by taking a photo of the strands,” says Baughman. “Then we take a Sharpie and dot each egg and use a finger counter to make clicks. It’s a pretty tedious process, but it’s really important we do this because we want to know our fertility average.”

This year’s fertility average was 62 percent, which Baughman says is really good. That means close to 8,400 of the eggs started tadpole development, which occurs 5-7 days after eggs are laid. Most of the tadpoles (7,644 of them) were released to the wild, but a few hundred were also sent to the Leadville and Saratoga fish hatcheries. CMZ also held back over 300 to become part of the Species Survival Program (SSP) breeding population and to be next year’s head start toads.

“Every year, transfers are conducted between facilities to ensure genetic variability for future breeding seasons, which is why we held back some of our tadpoles from this year for other zoos and facilities,” explains Baughman. “The rest of the tadpoles will become our next generation of head-start toads. These toads will grow from now until May when we will release them as adults into their Wyoming habitat.” 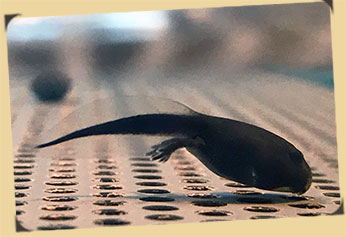 On June 27, CMZ staff travelled to Wyoming to help with a Wyoming toad field survey that looked specifically for tadpoles. When tadpoles are found during a survey, they are measured to differentiate between those that have been released from breeding facilities versus wild tadpoles. Although the aim of this survey was to document and measure any tadpoles found, toads were also seen in the field. These toads were observed but not interfered with to avoid causing unnecessary stress.

These surveys are crucial in determining if the population is making a comeback. We expect there to be ups and downs as the recovery of a species is never immediate.