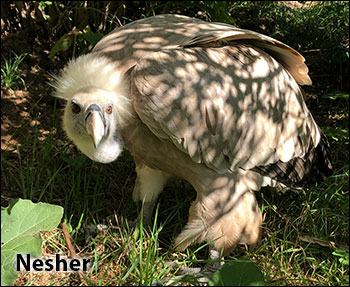 The Cheyenne Mountain Zoo family is getting excited for International Vulture Awareness Day (IVAD) on Saturday, September 5, 2020 – almost as excited as Godric, Hedwig and Nesher, CMZoo’s three vultures, get for training time.

When 6-year-old male African cape vulture, Godric, and 14-year-old female African cape vulture, Hedwig, see their keepers approaching, they come running. With their enormous white wings held back in the charging position and their impressive beaks aimed low and straight forward, the raptors move at an intimidating pace with little regard for any obstacles – or guineafowl – in their way. Nesher, a 29-year-old Eurasian griffon vulture, has a more reserved approach, waiting receptively by the perching for her keepers. It hasn’t always been this way for the instinctively cautious birds, but their keepers have been working hard to earn the vultures’ trust – and it’s benefitting the vultures, the keepers, our guests and vultures in the wild.

“We’ve always interacted with them, but until recently, they wouldn’t have been comfortable with us sitting this close,” said African Rift Valley keeper Philip Waugh, as he perched on a rock about two feet from Godric. “We’ve been making opportunities to spend more time with them and to reward them for being calm with us while we calmly sit with them. We all have our stations, both keepers and birds. We just hang out together on their turf by the vulture perches, and that’s helping build our relationship of trust.”

At first, the keepers would go and find the vultures for their three-times-weekly feedings. Because they eat so infrequently, training and building relationships requires a lot more patience than it normally might with animals that eat multiple times daily. But the patience is paying off.

“Before, we could tell they weren’t huge fans of sharing their space with us, but now they get excited for training, “said Waugh. “They have incredible eyesight, so they can recognize us all the way from the giraffe boardwalk, and they start sprinting down the Safari Trail to our meeting point. They beat us there nearly every time.”

Making sure these interactions are positive for the vultures is important because keepers can provide frequent visual health checks and expand their training. It also helps keepers foster special connections between guests and the vultures, which ultimately benefits their wild counterparts.

“If you’ve ever been up-close to a bird with an eight-foot wingspan, you know how impressive it is,” said Waugh. “Just seeing them eye-to-eye makes an impact. Our goal is to find more ways for our guests to connect with them. We know that once people meet them, our vultures will inspire our guests to learn more about this amazing species and its struggles, then take action to protect their wild relatives.”

When COVID-19 isn’t an issue, the Zoo hosts IVAD activities at the Zoo throughout the day to help guests learn more about vultures. This year, to prevent large crowds from gathering during the pandemic, the team will post fun and educational materials on the Zoo’s social media pages.

Even though the Zoo can’t offer in-person IVAD activities on September 5, just by visiting the Zoo, guests are helping CMZoo protect and advocate for wild vultures. 75¢ from every Zoo admission goes to conservation through the Quarters for Conservation (Q4C) program, which has raised more than $3 million since it started in 2008.

One of CMZoo’s Q4C beneficiaries is VulPro, a nonprofit organization in South Africa working to save endangered African vultures through breeding, rehabilitation, research and education. Vultures, positioned at the top of the food chain, are an indicator of the health of the environment below them – and dependent for their survival on a healthy environment. Every visit to the Zoo supports this organization on the frontlines of vulture conservation.

“Vultures are nature’s clean-up crew,” said Waugh. “They clean up carcasses that other animals can’t. They stop the spread of disease by consuming decaying meat and bones. Thanks to their strong stomach acids, they can consume deadly bacteria that could pose a threat to animals and humans. They do so much more, but the most basic explanation is that they make the world a lot prettier, safer and a lot less smelly.”

Vultures’ adaptations help them make quick work of the world’s messiest clean-ups. Their iconic bald heads prevent bacteria from sticking to their skin, an important trait for such a mobile animal. Preventing the spread of bacteria is key for their well-being, which is why some vulture species urinate on their own legs, killing carcass bacteria in the process. Their nares, or nostrils, drip a salty liquid that helps flush out their sinuses, removing any rogue pieces of meat that may have gone up their noses during ravenous eating. Just because they’re built for devouring dead animals doesn’t mean they’re unhygienic, though. They bathe regularly, both in the water and the sun. The UV rays from the sun kill any pathogens in their feathers after feeding.

“My favorite time to see them is in the mornings when they’re open-winged, sunning themselves in the early light,” said Waugh. “I love watching them interact with each other. They all have such unique personalities.” 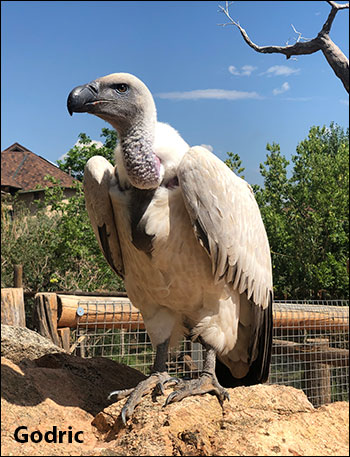 Godric, Nesher and Hedwig interact with toys, keepers, food and each other in distinct ways.

“Godric and Hedwig are hilarious,” said Waugh. “They’re both African cape vultures, but they’re not related. Still, they act like siblings a lot of the time. They explore new enrichment items together and if one vulture is nervous or excited, the other usually rushes to join in, whether or not they know what’s going on. They will also bicker over food or a good sunny spot, but that’s normal for vultures. Godric seems to be the most eager to approach us, but Hedwig is gaining confidence.”

Nesher, whose keepers describe her as the ‘queen bee,’ is the most confident and the oldest, at 29 years old. She prefers to spend most of her time by the vulture perching, but also has a bit of an adventurous bone.

“She recently commandeered the Okapi yard,” said Brooke Powell, African Rift Valley keeper who works with Philip and the vultures. “She also frequently ventures into the giraffe yard. Nothing scares her. This species is naturally pretty avoidant of new things, but she’s the opposite of that. She’s really bold and brave. Not a lot phases her, and she has the coolest vocalizations when I feed her and she’s excited.”

Vultures communicate about food, territory and potential threats in the wild by vocalizing.

“When Nesher vocalizes, she usually runs toward us full speed,” said Powell. “It’s really impressive. People can hear her from the giraffe boardwalk all the way across the yard, which is cool because we see people getting curious about the vultures and then come to visit them.”

Next time you’re at CMZoo, look down from the African Rift Valley ramp up to Encounter Africa, where the vultures are often perched. Supporting CMZoo is an easy way to support vulture conservation through its longstanding partnership with VulPro. The Zoo has contributed more than $90,000 to VulPro over the years.

“After VulPro rescues and rehabs vultures, they’re released into the wild, which is super important because they’re so endangered,” said Waugh. “VulPro rangers rescue vultures that have been poisoned by poachers – one of wild vultures’ biggest threats.”

The carcasses of poached animals attract vultures. A large group of vultures is easier to spot than a deceased animal, so their presence helps rangers find poached animals. Poachers caught onto this pattern, and started poisoning the carcasses to kill the vultures that eat them, thus hiding their misdeeds. Supporting VulPro’s ongoing rescue, rehabilitation and release efforts means more wild vultures can breed and thrive in the wild.

There are several ways to protect vultures here in Colorado, too. Turkey vultures are native to our region, and are just as important to our local ecosystems as African vultures are in theirs.

Pick up trash to help vultures avoid ingesting dangerous materials. Avoid using poisons for pest control or weed killer. Report roadkill to local authorities, so vultures aren’t encouraged to dine in the middle of a busy road or highway. Slow down when you see roadkill, so vultures and other scavengers have time to get out of the way. Use lead-free fishing tackle and ammunition. Dispose of fishing line properly.

To learn more about vultures, and how you can help save this incredible species, mark your calendars for Saturday, September 5, when CMZoo will share a video of up-close interactions with the vulture trio on Facebook and YouTube.