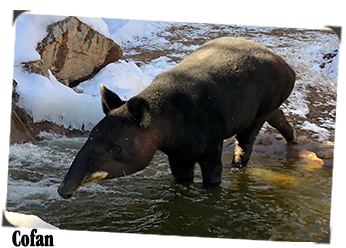 It’s no secret that Cheyenne Mountain Zoo is home to rare and unique animals. But, this month’s Animal Encounter features two CMZoo ambassador animals that are so extremely rare, that CMZoo is one of only two places in the nation where they can be seen. CMZoo’s mountain tapirs are two of only seven in the United States. Fewer than 2,000 exist in the world.

In addition to their rare presence, they have an unusual appearance. Their prehensile noses with long snouts, odd-and-even toed hooved feet and bear-shaped bodies look like something magical out of a children’s book. It’s not surprising that CMZoo’s mountain tapirs, Carlotta and Cofan (pronounced coe-FAWN), steal the heart of just about everyone who meets them.

Unlike their elusive wild relatives, Carlotta and Cofan are mostly calm, but have their playful moments. Cofan, a 15-year-old male tapir whose woolly fur is darker than his exhibit mate’s, is curious about new enrichment items and can sometimes be found splashing in the water feature in their exhibit. Carlotta, a 24-year-old female tapir is bigger than Cofan, and has a hole in her left ear (a common scar for female tapirs whose mates often bite their ears during breeding season). Carlotta likes water in moderation, too. One day, keepers found 360-pound Carlotta standing with all four feet in an 18-inch wide water bowl. 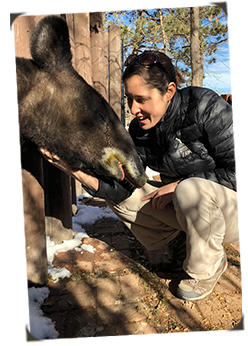 “Mountain tapirs are cool,” Michelle Salido, lead tapir keeper said. “They’re really interesting looking. Most people immediately think they’re a cross between a bear and an anteater, and you can see why.”

Mountain tapirs, from the Andes Mountains in Colombia, Ecuador and northern Peru, are one of four species of tapir. With the average female weighing about 400 pounds, they’re the smallest of the tapir species. Mature female tapirs usually weigh about 30 pounds more than adult males.

Carlotta and Cofan live down the path from Monkey Pavilion, in a mountain-inspired exhibit that they share with Muscovy ducks. In the wild, they live at between 6,000 and 12,000 ft. in elevation, so their high-altitude home on the Front Range is especially suitable.

“It’s estimated there are fewer than 2,000 mountain tapirs left in the world,” Salido said. “There are only seven in the United States at two zoos, so the fact that people can come and see them right here in Colorado Springs is a real privilege.”

Carlotta and Cofan were the last breeding pair in the U.S., but are no longer suitable for breeding because of Carlotta’s age.

CMZoo staff, thanks to support from Zoo members, works diligently to save mountain tapirs and their habitats south of the equator. Earlier this year, Salido and two other CMZoo staff members went to Ecuador for a second time to track and attach GPS collars to mountain tapirs.

The research is critical, given the limited number of animals left in the wild and the lack of available data about them. Salido said CMZoo’s mountain tapir conservation partner at Andean Bear Foundation (ABF) and Smithsonian National Zoo reported that the high-tech GPS collars collected more geo-data in a week than the previously used radio collars collected in five years. The team’s goal is to present complete data to organizations that can place land protections in the areas where tapirs most frequently roam.

“Their native habitats are being developed for pipelines, mining and agriculture. The tapirs living in those areas are considered a nuisance,” Salido said. “One morning we were there, it took a matter of hours to see the difference in habitat destruction going on in the forest. Seeing their habitat destroyed in front of my eyes made our work that much more important to me.”

Salido said the tapirs she tracked in the wild are much bigger than Carlotta and Cofan, so getting close enough to attach the collars was incredibly challenging, especially given the mountainous terrain and high altitude. 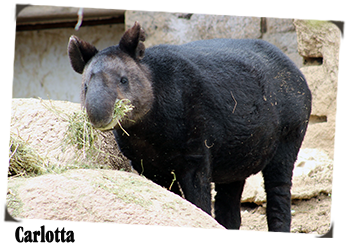 Another unique feature of the tapir is its feet. Ungulates – hooved animals – are usually either even-toed or odd-toed, but tapirs are the only ungulates to have four toes on both front feet and three toes on each back foot.

“They live on wet, steep inclines in the wild,” Salido said. “You can see how the ability for their hooves to spread and morph to the ground beneath them helps them better navigate difficult terrain. They’re wicked fast in the wild.”

Carlotta and Cofan are model ambassador animals, helping people form connections with animals whose species are threatened with extinction in this lifetime. One way they do that is by meeting guests up close and personal. Salido says every morning she greets these two ‘Labradors of the Zoo,’ as she calls them. She gives them a good chin scratch and armpit scratch, and they stick their legs out for more.

“These two are calm and gentle for the most part,” said Salido. “They love getting chin scratches. They’ll walk over and put their heads between the bollards so we can reach them. They go into a ‘tapir trance’ and get super relaxed. Cofan will close his big eyes and let his tongue hang out if you scratch him just right.”

Their appearance has earned them some unusual but endearing nicknames. They’re sometimes playfully called ‘snorkel pigs,’ referring to their long snouts and body shapes. Others call them ‘clown mouth tapirs,’ alluding to the white fur around their mouths – a feature that distinguishes mountain tapirs, also known as woolly tapirs, from the other four species of tapir.

CMZoo will continue working to protect mountain tapirs in the wild. To learn more about these rare mammals, swing by the Tapir exhibit to see Carlotta and Cofan at Cheyenne Mountain Zoo.