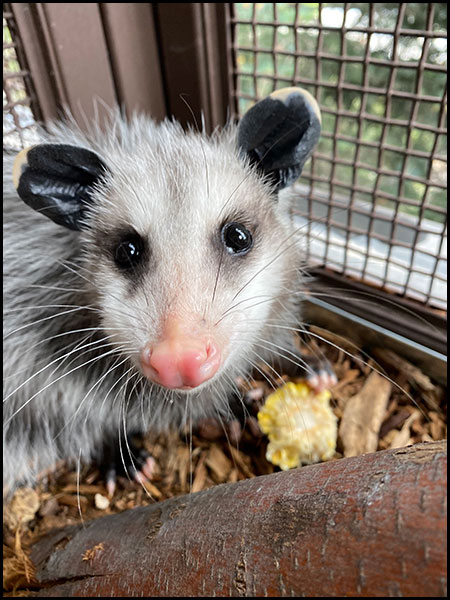 My Big Backyard is home to a brand-new button-nosed furry face! Help us welcome Hubble, a 4-month-old Virginia opossum, to CMZoo.

“We named him Hubble because he’s still growing into his big ears, which kind of resemble the space telescope,” said Bryce Oberg, keeper in The Loft and My Big Backyard.

Hubble lives next to Guy Fieri, CMZoo’s rooster, in an upward-built habitat that’s perfect for the very active arboreal baby boy. Guests can see him right away. Hubble’s care team is already hard at work preparing him for his future role as an ambassador for his species.

Hubble came to CMZoo from a wildlife rescue facility in Kansas after being found alone in the wild with a severely broken tail. Once he made it to CMZoo, his care team decided his best option was to amputate his tail, so Hubble has quite a unique look. Because he has learned to navigate without a tail from a young age, keepers haven’t seen Hubble’s unique difference slow him down at all. They report he’s quite the skilled climber, and his curiosity has already motivated keepers to adjust his perching because he has reached parts of his home they didn’t think he could.

“We will probably never know what Hubble encountered before being rescued, but we’re happy he’s starting to settle in here with us,” said Oberg. “He has been through a lot of changes in his short life, but he’s resilient. We’re working with him daily to earn his trust, which is a first step toward training with him. We’re taking him tasty treats and sitting calmly near him, so he can see that he’s safe and has choices when he’s with us.”

Next, he’ll train to voluntarily enter his transport crate, get comfortable with being touched, and then he’ll learn to interact safely with guests as an ambassador. Their goal for Hubble – once he’s ready – is to serve as an outreach ambassador, educating people about his species’ many wonders.

“There are a lot of misconceptions about opossums because when they feel threatened, they can look pretty scary with their big mouths full of 50 teeth – the most teeth of any North American mammal,” said Oberg. “But, they have to look scary because their defenses pretty much end there. If we respect opossums’ warning signs and give them space when they tell us they need it, 99 percent of the time they will move on with their peaceful opossum lives.”

There is one defense that opossums are famous for, which admittedly leaves them more vulnerable than unnerving: playing dead.

“When opossums play dead, it’s a last-ditch effort to make their perceived predators think they’re not going to be a good meal,” said Oberg. “It’s an involuntary response that is triggered when they’re startled or stressed. They release a really bad smell so they smell like they’ve been dead for a long time, their heartrate decreases, they drool excessively, stick their tongue out and fall over.”

Opossums have been known to play dead for hours at a time. So, as a general rule, if you see an opossum that isn’t moving and isn’t obviously injured, leave it alone. It could be playing dead and will wake up and move away on its own. If it’s been lying there for more than a day, it’s good practice to have it removed. If it’s in a road, call wildlife authorities to move it.

Opossums are slow moving, have poor eyesight and are nocturnal, which presents a lot of obstacles for North America’s only native marsupial. But, there’s a lot to love about opossums. The presence of opossums is an indication of a healthy ecosystem. They are opportunistic omnivores, which means they’ll eat just about anything. As scavengers, they are part of nature’s clean-up crew. They feed on carrion and help prevent the spread of diseases in carcasses, just like vultures do. They’re naturally resistant to snake venom, so they can safely eat snakes, which helps control the venomous snake population. Because of their naturally low body temperature, they’re virtually incapable of carrying rabies. They also eat ticks, which prevents the spread of tick-borne illnesses.

“Hubble has a long way to go before he can meet guests up-close, but we’re already seeing how inquisitive, resilient and energetic this little guy is,” said Oberg. “Once he’s ready, we’ll be excited for him to join us on walkabouts in the Zoo and on outreach programs.