Cheyenne Mountain Zoo is home to two male American alligators, Tommy and Tori, who live in Australia Walkabout. Both boys came to CMZoo as hatchlings, beginning with Tori nearly a decade ago. It may come as a surprise to some who are unfamiliar with their species, but alligators are intelligent.

In a new training area in the indoor section of the alligator exhibit, Tommy is learning to come out of the water onto a sandy area and line up alongside a set of wooden barrier poles. Tommy sits on one side of the poles and the keepers interact with him from the other side, performing routine checks on his feet and scales among other things. Keepers will eventually work up to getting voluntary blood draws from Tommy, which will help them monitor his health beyond visual check-ups.

“We set up the area so he has ultimate control,” said Bruce Dunbar, alligator keeper at Cheyenne Mountain Zoo. “If he doesn’t want to be up here with us, he can just go right back into the water. When we tell people about this work we’re doing, most people say, ‘I didn’t think you could train an alligator!’ but it’s all about finding the right motivation that allows them to succeed. They’re very intelligent, which most people don’t assume about alligators.”

Tommy and Tori have previously excelled at station training, which involves them touching their snouts to different colored paddles presented by the keepers. The ‘gators are able to differentiate between the different colors, and they receive a food reward when they choose correctly. That allows keepers to separate them within the same area during feeding time or for individual check-ups.

Tommy is seven years old and about nine feet long, and Tori is nine years old and about ten feet long. While we haven’t had a need to weigh Tommy or Tori, the average adult American alligator weighs about 300 pounds, making it the largest native reptile in North America. American alligators are naturally found in slow-moving fresh water rivers and lakes in the southeast United States and along the Gulf of Mexico coast. 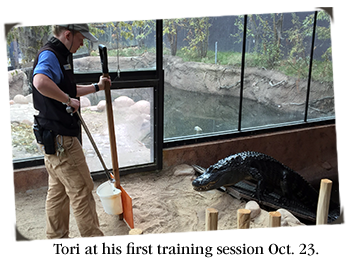 Both Tommy and Tori are very curious, which makes them great students in addition to their intelligence. Contrary to the common misconception that alligators are aggressive, Dunbar says they’re actually a little skittish.

“One day, I was carrying a large cardboard box past Tommy and Tori’s exhibit area, where they were out basking in the sun. I walked by with this big, unusual object, and it kind of startled them. I’ve never seen them move so quickly,” Dunbar said. “They got into the water as fast as they could. Water splashed everywhere; tails were whipping. They’re nervous and aware of everything around them. They’re pretty passive animals when it comes to neutral interactions. For the most part, they want to be left alone.”

Zoo visitors often ask how to tell them apart. Tori is larger and has a wider head than Tommy, and Tommy has more yellow markings on his sides. As alligators age, they start to turn grey. Tommy is two years younger than Tori, so he will probably lose his yellow coloration in the next few years. Their yellow camouflage makes them look like sunlight filtering through the water, which helps them hide from predators and prey, like fish and wading birds, or other alligators in the water.

On warmer winter days, when outdoor temperatures reach the fifties and sixties, there’s a good chance you can see Tommy participating in his new training, which is inside. Because alligators’ digestive systems slow down during cooler seasons, they don’t eat (sometimes for up to a month). During those extended cooler periods, they don’t participate in training because they wouldn’t receive the food rewards that motivate their behaviors. Dunbar says on colder days, the alligators are most active between 10 a.m. and noon, when they’re out basking and soaking up the sun before they return to their heated pond for the rest of the day

You can learn more about Tommy, Tori and their relatives in the wild at Cheyenne Mountain Zoo gator keeper talks every day at 11 a.m. in Australia Walkabout.