A new African Rift Valley resident is making progress with her keepers and is taking her time getting to know her potential mate. Six-year-old Red River hog, Zena, came to Cheyenne Mountain Zoo on a breeding recommendation with 12-year-old Hubert, who has lived at CMZoo since 2008. 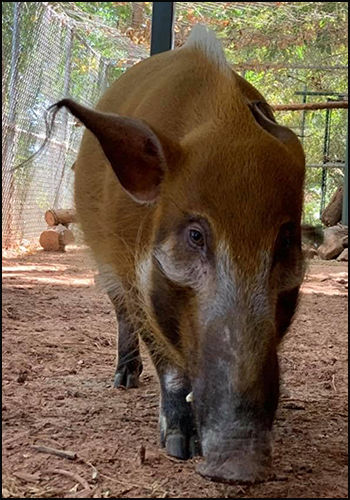 Zena, who can be identified by her unique white ear tassels, has a shy and hesitant personality, but has already formed a trusting relationship with her keepers, who say she’s an excellent student.

“She already participates in her own health care with voluntary injection training, crate training and shift training,” said Philip Waugh, an African Rift Valley animal keeper who works closely with the Red River hogs. “She has the cutest hooves, and she runs really fast. She almost looks like a ballerina on her tip toes. It may seem like a strange thing to say about a hog, but she’s beautiful. Her eyes are really expressive.”

Because of Zena’s timid demeanor, her keepers are allowing lots of time for her to gain confidence with Hubert – known as ‘Huey’ by his many fans – who was selected by the Red River Hog Species Survival Plan as a good breeding partner for Zena based on their genetics. Since her arrival, the two have maintained interest in each other, but their comfort levels while sharing space have fluctuated.

Zena and Huey first got acquainted through a mesh barrier, which allows them to smell, hear and see each another without sharing the same space. Introductions with a protective barrier – known as ‘howdies’ – allow keepers to observe the hogs’ behavior towards each other and indicate whether the hogs are ready to take things to the next level.

“During howdies, the two of them smell each other, lie on either side of the mesh and even touch noses through the mesh,” said Waugh. “All of those calm behaviors usually indicate they’re ready for the next step in their introduction.”

Once the two are sharing a space, however, Zena hasn’t been as confident.

“This has been an interesting introduction because they are definitely interested in each other and even show us that they’re more comfortable when the other one is nearby,” said Waugh. “We’re just not quite seeing that comfort carry over when they’re sharing a space without a barrier between them yet.”

One sign of comfort during howdies is Zena pushing her body up against the mesh and Huey calmly smelling her from the other side. Another is a call they make to each other when they’re visually and physically separated. Zena is also generally calmer in a space by herself when Huey is in the space next door.

“When they’re in spaces within earshot of each other, but can’t see each other, we’ve noticed they will make little calls back and forth,” said Waugh. “That’s a good sign because it means even though they’re not quite ready to spend time together physically, they are acting as a social unit.”

The two hogs are making progress, but these things sometimes take longer than anticipated.

“They’re both such sweet-natured hogs and we’re seeing progress, so we’re going to keep trying,” said Waugh. “Huey has lived with Ari for so long and Zena spent a lot of time by herself previously, so this is like a first-first date for both of them. We all know how awkward first dates can be, so we’re working to make their time together as positive as possible, so they can recognize it’s safe and beneficial to be together.”

When keepers manage introductions between animals, they listen to what the animals are telling them through their body language and behaviors. If an animal appears uncomfortable with the scenario, their team makes changes to help the animals recognize that they have control in their environment. Placing different kinds of enrichment in the introduction spaces and changing introduction spaces can be beneficial.

Keepers have tried introducing Zena and Huey without a barrier only twice. The most recent space, which has shown promise, is in the zebra and okapi yards, which share a fence and can be adjoined. Most mornings, CMZoo giraffe cam fans have watched in delight as the two hogs run separately through the giraffe yard to spend time outside in the adjacent spaces.

“Animals all have different personalities, and Zena is on the timid side, so we’re giving her plenty of time to gain confidence around Huey,” said Waugh. “Although they haven’t been perfect, their introductions have been safe, so we’ll continue following their lead and trying new things that might give her more confidence. Maybe this new space will be just what they need – and hopefully the third time is a charm!”

The ultimate goal is for guests to get to know Zena on exhibit with Huey. 18-year-old female Red River hog, Ari, will also share on-exhibit time with Huey, and have the yard to herself sometimes. Ari, who birthed four healthy piglets over the years with Huey, is no longer recommended for breeding, but will continue being a stellar animal ambassador at CMZoo for the foreseeable future.