Giraffe conservation was given a generous boost from many helping hands when Operation Twiga III rolled out in Uganda earlier this month. Cheyenne Mountain Zoo staff and other concerned conservationists took part in translocating endangered Nubian giraffe to a safer location, where they could establish new herds and maintain the important genetics of their subspecies. Additionally, the operation generated more critical health data which will feed research that helps conservationists understand disease management and threats facing all giraffe in the wild. 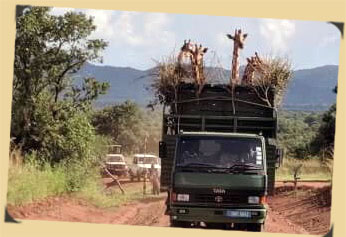 “The team was able to capture and move a total of 14 giraffe from Murchison Falls National Park, where oil drilling is set to begin, to their new home in Kidepo Valley National Park,” said Dr. Liza Dadone, head veterinarian and VP of Mission & Programs at CMZ. “These giraffe, which include 13 females and one male, will join the approximately 35 Nubians that currently live there. Those 35 giraffe grew out of a founder population of only 3 giraffe, so we know translocations like this can work. An exciting development this year was the observation of giraffe calves in two other recently formed giraffe populations; one on the South bank of Murchison Falls National Park from Operation Twiga I and II, and one in Lake Mburu National Park from a 2015 translocation.

“The translocation process is really helping to create larger, more stable populations in multiple parks in the country,” Dr. Dadone said. “Previously, the majority of all remaining Nubian giraffe in Uganda lived in Murchison Falls, and up until four years ago there was only one other population of giraffe left in the country – those 35 or so animals in Kidepo Valley National Park.” 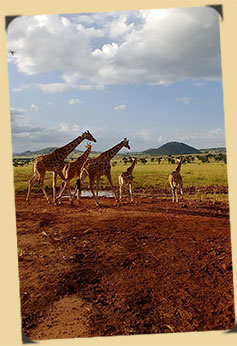 The Twiga operations have been successful in large part due to their partnership structure. Operation Twiga III was a combined effort among the Uganda Wildlife Authority, which led the project, Giraffe Conservation Foundation, and Cleveland MetroParks Zoo, with support from other organizations that sent supplies and staff to help. Making the trip this year on behalf of Cheyenne Mountain Zoo were CMZ Animal Care Manager Jason Bredahl, CMZ veterinarian Dr. Sara Ferguson, and Dr. Miranda Sadar, who is an assistant professor of avian, exotics and zoological medicine at the James L. Voss Veterinary Teaching Hospital/Colorado State University.

In addition to capturing and translocating the giraffe, the team was able to continue important research about health threats facing wild giraffe in Uganda.

“Over the past three years, we have been conducting anesthesia studies to try and increase patient (giraffe) safety,” explained Dr. Dadone, who was part of the Twiga I and II operations. “We have also been doing health assessments, so now our hope is to establish some baselines on animal health in Murchison Falls so we can try to evaluate whether oil drilling – which is expected to start by the end of 2018 in the park – is causing chronic stress, illness or mortality in wild giraffe.”

The team has also been investigating the cause of a skin condition seen in many giraffe in the park. While not currently causing health issues for the giraffe, the condition does not exist in Kidepo National Park giraffe, so they are trying to prevent the spread of the disease by developing a treatment.

“In 2017, we collected skin biopsies that were imported to the U.S. for study at the Colorado State University vet school,” said Dr. Dadone. “Our team there confirmed preliminary findings that the skin condition is associated with a parasite, so in April 2018 we started a treatment trial in Murchison Falls with a long-acting parasite treatment. The Operation Twiga III team treated all the giraffe with this parasite medication before they were moved from Murchison Falls to Kidepo to help prevent the possible spread of disease to a new habitat.”

It is hoped that ongoing research at CMZ and other zoos using giraffe trained for voluntary blood collection will reveal how long the drug treatment lasts in giraffe, thus helping with disease management moving forward.

All three Twiga expeditions have been financially supported by Cheyenne Mountain Zoo’s conservation programming, which is funded primarily through Quarters for Conservation (guest tokens) and allocations from membership revenues. While $75,000 in direct support from CMZ was donated to the Twiga effort, many other zoos and organizations around the world also helped fundraise for this important work. In addition, many generous individual donations have been made consisting of both money and goods. 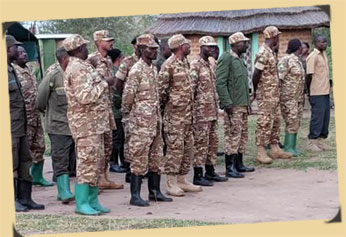 “The team brought many other much-needed things with them on the trip,” said Dr. Dadone. “These included medicines and supplies to help with anesthesia monitoring, patient health assessment, medical management and research, and three large field tents funded through a grant. The team also brought 22 pairs of combat boots for the Ugandan ranger team, donated by the 440th Affairs Battalion at Fort Carson and Jose Contreras of GI Jose Military Supply.

“The rangers previously only had galoshes,” said Dr. Dadone, “so the donation was greatly appreciated.”

Also greatly appreciated was the individual support given a Ugandan ranger by the name of Bridget. Bridget was part of Operation Twiga II, during which she revealed her desire to attend university for a degree in wildlife management. She simply didn’t have the money.

“When one of CMZ’s docents heard Bridget’s story, they provided a scholarship for her to attend Makarere University in Uganda! She started school a few weeks ago,” Dr. Dadone said, adding that another anonymous docent purchased a laptop for her, while CMZ keepers pitched in for a backpack and school supplies. The team delivered the supplies soon after arriving in Uganda. They also visited the zoo in Entebbe to continue building conservation, education and animal care collaborations.

Cheyenne Mountain Zoo is committed to continued support of conservation efforts on behalf of wild giraffe, and you can help simply by visiting the Zoo. For each paid visit to the Zoo, 75¢ is directly allocated for conservation programs just like this one. Memberships also help support these efforts.

“Our community can also help by raising awareness for wild giraffe conservation,” said Dadone. “Their future is not secure; giraffe are already locally extinct in seven African countries. We know that oil drilling is a direct threat to some giraffe populations, so consider carpooling and taking other actions that help reduce your personal use of fossil fuels. Please also mark your calendar and help us celebrate World Giraffe Day each year (June 21) – the longest day of the year for our tallest land mammal.”