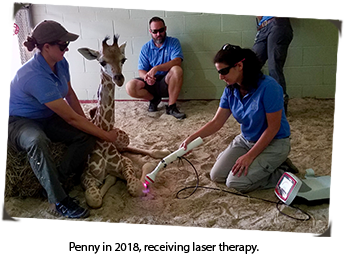 When Penny, a reticulated giraffe calf, was born at Cheyenne Mountain Zoo on June 4, 2018, Dr. Liza Dadone, head veterinarian and VP of mission and programs, couldn’t have known that the next few months of care for the sixteen-member giraffe herd would present such complicated cases. Since Penny’s passing late last summer, her legacy has continued both by helping people around the world fall in love with giraffe and by helping advance giraffe medicine in zoos.

Within months of Penny’s birth, the giraffe care team was managing unprecedented rare cases including a brand-new calf who needed intensive medical care, a chronic ligament strain in a mature male, and a mature female who would eventually reveal a false-positive pregnancy – one of only four such cases of the false diagnostic result ever documented.

Dr. Dadone did, however, know how precious a placenta could be to help improve both therapies and diagnostics for giraffe medicine. Minutes after then-20-year-old Muziki gave birth to Penny, Jason Bredahl, giraffe animal care manager at Cheyenne Mountain Zoo, picked up the placenta and handed it off to Dr. Dadone.

“I had been speaking with Dr. Priya Bapodra-Villaverde at Columbus Zoo and Aquarium about a new, more accurate giraffe-specific pregnancy test she had been working on. Although the test had been used successfully on other hoofstock species, we knew that part of the giraffe placenta could contribute to this research,” said Dr. Dadone. “We split the placenta between Dr. Bapodra-Villaverde’s team and the vet team at Colorado State University, who would use it to develop a line of giraffe stem cells that can be used to help manage arthritis and other conditions.”

In late July 2018, CMZoo had to say a heartbreaking goodbye to Penny, whose story had captured the hearts of people around the world. As CMZoo put Penny to rest, her legacy continued with her placenta’s research contributing to creating a new, more accurate giraffe pregnancy test, and to creating a giraffe stem cell line.

Laikipia was the first giraffe in our herd to be tested with the new pregnancy test. Laikipia was thought to be pregnant at the same time Muzuki was pregnant with Penny, but the fact that she never gave birth puzzled giraffe experts at CMZoo and beyond. Throughout the international network of AZA-accredited organizations with whom CMZoo shares and gains input on rare cases, like hers, she was one of only four giraffe ever known to consistently falsely test positive for pregnancy.

Ever since breeding with CMZoo giraffe bull, Khalid, Laikipia had tested positive for pregnancy – but did not test positive before breeding. The CMZoo giraffe care team used the usually reliable methods of confirming pregnancy in a giraffe, including a lack of menses and elevated progesterone levels in blood and fecal samples. They even attempted logistically challenging ultrasounds, which proved inconclusive, as they often do in giraffe.

By October 2018, Laikipia had surpassed her gestation window without signs of miscarriage and with consistently elevated progesterone levels, and Dr. Dadone and her team continued to look for ways to diagnose Laikipia’s condition.

The timing was almost perfect. The new pregnancy test, developed by Columbus Zoo’s lab partner BioTracking, Inc. was ready for real-world trials in spring 2019, after being used to successfully detect pregnancy in two giraffe at the Columbus Zoo. Knowing there was no way Laikipia was still pregnant, despite her continued positive pregnancy test results, Dr. Dadone knew Laikipia was the perfect candidate to test the accuracy of the new test.

“We thought, ‘if any giraffe could break this new test, it’d be Laikipia,’” said Dr. Dadone. “We also knew Msitu was pregnant, so we tested her pregnancy to validate the accuracy of this new diagnostic.”

The new blood test, which detects a protein only present in pregnant giraffe, called Pregnancy-Specific Protein B (PSPB), could also help confirm pregnancy sooner than traditional progesterone-detecting pregnancy tests. Even more helpful for veterinary staff and animal care managers everywhere, early results suggest it could more precisely predict when a calf might be born.

“On the anniversary of Penny’s birth, we got the news that the new pregnancy test, developed in part thanks to Penny’s contribution, appears to be a great new diagnostic tool for giraffe,” said Dr. Dadone. “Laikipia’s pregnancy test came back negative and Msitu’s came back positive. While the lab is still running samples from more pregnant giraffe, this is hugely promising. We have Penny and her mom, Muziki, to thank for helping us detect and confirm this new test can work in giraffe.”

Dr. Dadone and Columbus Zoo and Aquarium will continue collaborating on ways to better diagnose and monitor giraffe pregnancy. The new pregnancy test, once fully validated, should help the zoo community more accurately predict when their giraffe are pregnant and due to give birth.

At this stage, the vet team believes Laikipia has a hormone-secreting cyst, which isn’t life-threatening and doesn’t appear to be causing her any pain or discomfort, but can cause long-term elevations in progesterone. The team now plans to start her on hormone therapy to try to help her return to normal cycling. This is a therapy used in cattle and sometime other hoofstock, but has not been previously reported for giraffe.

The second half of Penny’s placenta was sent to Colorado State University, to grow a new line of stem cells used for therapeutic purposes in giraffe.

The Zoo previously used stem cell treatments grown from blood collected from a giraffe in our herd, that already trained to donate blood. However, there was some indication that stem cell lines developed from placentas could provide even greater therapeutic benefits for giraffe with chronic issues like arthritis. 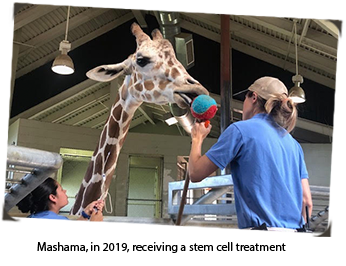 Penny’s stem cell line was used on two patients, the first of which was herself. Some of the cells were used to try to help Penny recover from a splay injury and infection. While that ultimately wasn’t enough to turn around her case, a second giraffe was also treated with stem cells grown from her placenta. At Blank Park Zoo in Des Moines, Iowa, a 21-year-old giraffe named Zuri was treated with cells to help manage her advanced age-related conditions. Following this treatment, Zuri’s coat grew in thicker and she had some clinical improvement. While Zuri passed away in May 2019, both of these cases are helping the zoo community learn more about clinical applications and potential benefits of stem cell therapy in zoo giraffe.

“Mashama has been dealing with sprained ligaments and a fracture in his right foot,” said Dr. Dadone. “Combine those issues with a ligament strain in his right front wrist [that looks like the right front knee], which preceded the fracture, and we have a pretty complex case to solve. We have tried therapeutic shoes, laser therapy, rest, and more. The next logical step is a cell stem treatment.”

While Penny’s placental stem cells have all been used with those first two cases, in July, Mashama was treated with a stem cell line grown at CSU. CMZoo is watching him closely and is hopeful the stem cell therapy can help him continue to heal, and help the zoo community learn more about applying novel therapies like stem cells to better manage health issues in giraffe.

The placenta from the calf born at CMZoo on July 6, 2019, will also be used to contribute to scientific advancements to make a stem cell line, like Penny’s did. Dr. Dadone and CMZoo staff will continue contributing to research and studies that will benefit the health of giraffe in human care, and in the wild.


Back to The Waterhole Home Page