He’s quadrupled in size, started training and is growing his first set of antlers – Our 8-month-old Alaska moose, Atka, has been with us for half a year – and what a busy six months it has been! We’re looking back at his progress and filling you in on what’s next for this quickly growing guy. 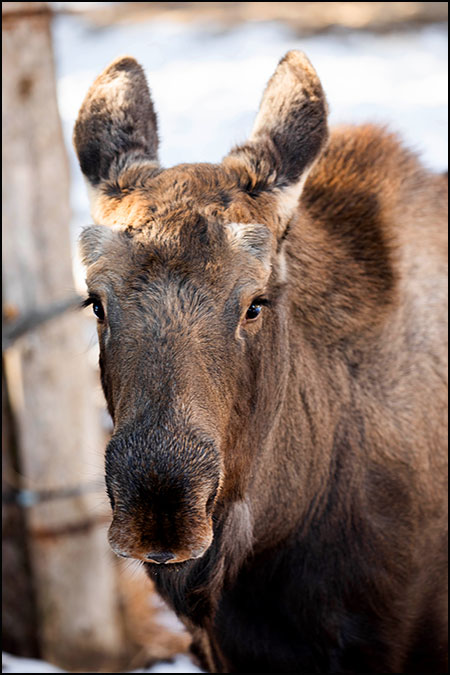 Before he even arrived at Cheyenne Mountain Zoo, his team was working to make his habitat safe for him. The moose yard was already set up for an adult moose, but Atka only weighed about 90 pounds when he first came to live in Rocky Mountain Wild in July 2020, so there was plenty of ‘baby-proofing’ to do.

CMZoo grounds and maintenance crews installed fencing with smaller openings for Atka’s safety – better suited for a moose calf. Within that exterior boundary fencing, his team created a smaller boundary that prevented access to complicated parts of the yard, like the culvert and pond. The smaller yard meant he could get used to his new home and his rapidly growing moose legs one step at a time. As he became more confident and grew in size, he gained more access to the large outdoor space.

Atka, who was unfortunately orphaned in the wild in Alaska when his mother was involved in a fatal human-wildlife conflict, was still being hand-fed three bottles per day. Over the next several months, his team introduced grain and browse, otherwise known as tree branches, and reduced the number of bottles he received until he was completely weaned. Atka, like other moose in human care, also quickly developed a taste for bananas, which made the not-so-fun transition away bottles a little more bearable. The bottles were helpful in developing initial bonds with his keepers, and bananas are a favorite treat now.

“He was hesitant about some of us at first, but also curious from day one,” said Kristen Cox, Rocky Mountain Wild keeper. “Sometimes, when we’d clean his yard, he’d come right up and put his nose under our arms and smell the tools we were using, then sniff the bags we used to clean up and stomp on them. It was really ‘helpful’ and fun to see he wanted to approach us and see what we were doing.”

At first, Atka wasn’t used to his new people, so keepers slowly worked to teach him that when they were near and touched him on the back or neck that he would be safe, and would be rewarded – usually with a bottle and later with half a banana. He needed to be comfortable with physical touch as a first step toward learning behaviors that are important to his long-term health, like voluntary hoof care, injection training, x-rays, blood draws and more.

The keepers and Atka developed a trusting relationship over time, and the young moose has become quite the scholar. He’s already learning all of the above mentioned husbandry behaviors, thanks to his keepers who worked with him at his own pace and respected any time he chose not to participate. Now, he’s comfortable with people he doesn’t see daily, too, like the CMZoo veterinary team and staff visitors who come by to visit.

At about 380 pounds (yes, he has quadrupled in size since he came to CMZoo – and could likely grow to about 1,600 pounds at his prime), Atka doesn’t get visitors inside his yard anymore, so he’s also learned to consistently approach his keepers at his training panel, right next to his barn.

As he interacts more and more with his keepers, they’re learning his quirks and demeanor.

“I think he’s coming into his own after so many changes in such a short time,” said Kelsey Walker, Rocky Mountain Wild keeper. “He’s really energetic and playful. He likes to rub his face against our knuckles and gently play-spar with us that way. He’ll also run with us if we’re walking by on the path. He’ll see us and we’ll say, ‘Hey, moose!’ and he sprints over to us and zooms around all excited.”

“One day, the giraffe keepers let us have some of their browse for him,” said Sarah Dugger, Rocky Mountain Wild keeper. “Normally when we give him browse, he just devours it. It’s his favorite, next to bananas. But this browse had been in the giraffe barn for a couple of hours, so it smelled like giraffe. He was smelling it and rubbing against it and just looked really interested in what this strange smell was. Then, he ate it.”

What’s next for young Atka? More eating and growing, of course, and his first set of antlers.

“I’m so excited to see how big he gets,” said Dugger. “We keep hearing how big Alaska moose are. How tall will he get? How much will he weigh? What will his antlers look like? It’s going to be cool to see how his behavior changes in rut, when his antlers are fully developed, too. There’s a lot to look forward to.”

Male moose grow a new set of antlers each year and shed them every winter. Each set of antlers is unique, but go through about the same annual growth cycle. During rut, when typically solitary wild male moose battle other males for territory and access to female moose, their testosterone peaks. Although Atka won’t need to battle for his territory, his hormones will still likely lead him to instinctive sparring behaviors. To fulfill this instinct, keepers will provide him with large barrels and other items to rub his antlers against (and probably spar with occasionally).

On social media, Atka fans can keep up with his antler development with a new series, #AtkaAntlerWatch, published monthly on Facebook, YouTube and Twitter. His first set of antlers started to form in November, but have really taken off in the last month or so. During each photo or video update on social media, Atka’s keepers will attempt to measure his antler growth. We say ‘attempt’ because this will not be an exact measurement, as Atka recently showed us he might be more interested in trying to taste the wooden ruler than being measured by it. As of the first update, on Jan. 25, 2021, his adorable antler ‘nubbins’ are about two inches tall, and are covered in fuzzy moose calf fur.

Soon, keepers will start introducing Atka to his pond – a next step his keepers say they can’t wait to see.

“It’ll be neat to see if he swims, because moose dive to eat underwater vegetation and can actually swim,” said Cox.
“I wonder if he’s going to get the zoomies in the water!” said Dugger.

Keep up with Atka’s exciting progress on the Zoo’s social media channels and by visiting him in Rocky Mountain Wild, voted the #2 Best Zoo Exhibit in North America by USA TODAY’s Readers’ Choice contest in 2020.