IT’S ALL ABOUT BALANCE FOR AGING MEERKAT BOMANI 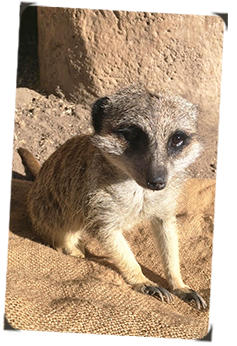 Our meerkat population grew three times last year with the addition of three litters of pups. If one of the eldest CMZoo meerkats, Bomani, is any indication, they have long and healthy lives ahead of them. Bomani, a 13-year-old male slender-tailed meerkat, has lived at Cheyenne Mountain Zoo with his two brothers, Akantse and Sekitimi, since he was born here in April 2005.

When you weigh less than two-and-a-half pounds and live across the way from six African elephants, it could be easy to feel overlooked. Not so for Bomani, who lives the bachelor life with his brothers, snacking on crunchy treats, playing games, guarding the mob from perceived predators and receiving special attention from CMZoo vet staff and keepers who make sure this aging Encounter Africa resident is as healthy and comfortable as possible for as long as possible.

In March 2015, during a routine wellness exam, CMZoo vets discovered that Bomani was in early stages of heart failure, which was causing fluid to build up in his chest.

“Because his heart doesn’t pump the blood correctly into the rest of his body, fluid tends to gather in his chest,” said Jeremy Dillon, animal care manager. “He’s on a medicine regimen that helps him process the fluid, but it doesn’t help enough to prevent the fluid build-up from putting pressure on his chest and lungs, which we’ve noticed causes labored breathing and slows him down.”

“The entire process takes about an hour,” Dillon said. “He’s crate-trained for instances like this, so it’s not stressful for him to be transported from his exhibit up to the vet clinic. We put some of his favorite treats in the crate, and he climbs right in. The vet team gives him anesthesia while he’s calm and comfortable in his crate. Then they bring him out to drain the fluid and return him to his crate to recover. So far, he’s done really well with the procedure and goes back in with his brothers without any issues.” 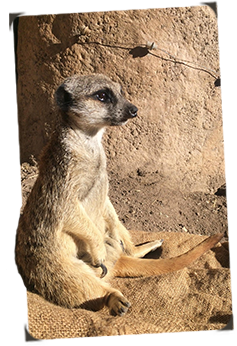 Over the last four years, vet and animal care staff have maintained flexibility with Bomani’s treatment.

“We realize he’s getting up there in age, so we always want to be sure that the procedures he’s receiving are worth his while,” Dillon said. “Right now, his energy, appetite and breathing are better after he receives the treatment, but we recognize that might not always be the case. Of course, he’s so loved and we want him around, but we ultimately want what’s best for Bomani, and that’s his quality of life.”

Dillon says Bomani loves to play, almost with the energy level of a young meerkat. He’s easily distinguished from his brothers, because he was born missing his left ear, which keepers say has never appeared to impair him. He runs around the exhibit, digging and diving into tunnels, ripping up enrichment items like brown paper sacks and paper towel rolls, or snacking on crickets and cockroaches that he has retrieved from a puzzle ball. He shows signs of aging, but Bomani still takes his sentry duty seriously. Dillon says Bomani diligently protects his mob when it’s his turn to stand guard, in case of overhead predatory birds or other perceived threats, and making impressive alarm calls when he needs to rally the troops.

It’s a delicate balance, providing medical care for aging animals. But vets, keepers and animal care managers will continue to follow Bomani’s lead, observing his behavior, monitoring his health and adjusting his treatment so he can enjoy as much life as he can, as comfortably as he can.

Guests can visit Bomani 365 days a year in the west meerkat exhibit of Encounter Africa.