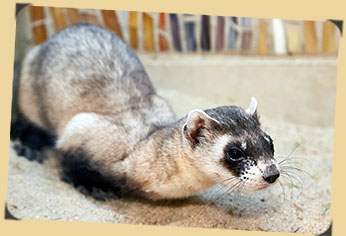 Every expectant mother wants good lighting for her big moment, but for black-footed ferrets, lighting is absolutely critical to optimum breeding.

Currently, Baughman averages about 20 to 30 black footed-ferret kits per breeding cycle. The ferrets are a little behind schedule right now, but Baughman has his fingers crossed that the females due from the beginning through the end of July will provide healthy kits. Baughman and staff have a whelping success rate of 57% – an impressive statistic that has helped bring this species back from the brink of extinction.

With their little black masks and feet, adorable ears and fluffy fur, it’s easy to assume the black-footed ferret is another one of North America’s plentiful small mammals, when in reality this apex predator is the only ferret species found on this continent.

During the western frontier exploration in the early 1800s, prairie dogs were identified as pests and large-scale poisoning and eradication programs continued into the 1930s. The prairie dog is the black-footed ferrets’ main prey, so, sadly, this behavior and belief also led to the decline of black-footed ferret.

By the early 1980s, black-footed ferrets were considered extinct – until they were rediscovered in 1981 on a ranch near Meeteetse, Wyoming. After studying this small population for a few years, scientists discovered they were extremely susceptible to diseases like canine distemper and the sylvatic plague. To effectively save the species, 24 ferrets were taken into human care.

Since then, a black-footed ferret Species Survival Plan (SSP) was written, enacted and has been continued by a handful of Association of Zoos & Aquariums-accredited (AZA) organizations along with U.S. Fish & Wildlife Service. Cheyenne Mountain Zoo is proud to be one of those zoos and is currently in the process of monitoring the whelping of seven out of 11 female black-footed ferrets at the on-site Zoo’s conservation center.

Baughman utilizes light cycling to stimulate breeding behaviors in the ferrets. He operates the lights at around 90 foot candles. A foot candle is a measurement of light intensity and is defined as the illuminance on a one-square-foot surface from a uniform source of light. This means it gets pretty bright during breeding cycles. In the fall, Baughman begins the light cycle at a low luminescence to stimulate breeding behaviors in the males. By late spring and early summer, the light level has increased to 15 hours of light per day to speed up the estrus cycle in females.

“These light cycles recreate what would naturally be happening in the wild and essentially make it feel and look like the long days of summer,” Dr. Klaphake said. “The ferrets need to cycle down and back up. The light starts this cascading of hormones up to the brain and back down to the organs to initiate breeding activity.”

To ensure optimum breeding opportunities, conservation staff will test the viability and health of male ferrets through sperm samples and then examine reproductive cytology of the females so that the best breeding partners can be matched up. 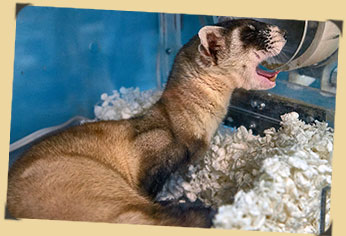 “We will test to evaluate the quality and number of sperm cells, their morphology and motility,” Dr. Klaphake said. Negative testing can indication reproductive challenges and if so, we can choose not to cycle those animals into the breeding pool, or we can contact the National Black-Footed Ferret Conservation Center up near the Colorado/Wyoming border and talk about exchanging for different animals.”

The ferrets’ gestation period is only around 50 to 60 days. After birth, the kits are monitored by camera. Conservation and vet staff try to stay as hands-off as possible, but will interact with the kits to assess their growth and weight, try to determine the sex of the kits and monitor both mom and babies for any health concerns.

“The first four days are hands-off,” Baughman said. “At 21 days, we’ll start weighing and determining sex, then at 26 to 30 days, we will introduce meat. At 37 days, they open their eyes. Then, at 50 to 90 days, they are given live prey and separated from mom to begin the pre-conditioning process. This is important because they need to be able to be effective hunters as they’re being reintroduced back into the wild.”

“Some might go into the wild ferret ‘bootcamp’ at the conservation center, others might to be sent to other facilities to be part of breeding programs and others might go to zoos to be animal ambassadors or conservation program animals,” he said.

“Bootcamp” is a pre-conditioning stage where conservation staff introduce and test ferrets slated to be released on their hunting and predation skills.

To get as many ferrets as possible to that stage, Baughman needs the remaining females to birth successfully. Part of the complication comes from the fact the ferrets are not artificially inseminated – their breeding is all natural. Though it’s not an exact science, Baughman is fairly confident that if all the components are on track – lighting, testing and time – the formula will again prove successful.

“It’s like a Tetris game, where all the pieces and parts have to fit into place,” he said.