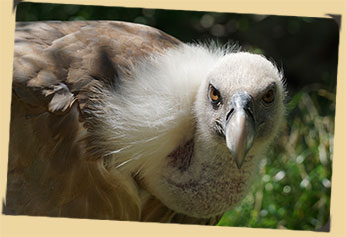 Vulture conservation has been a focus at Cheyenne Mountain Zoo for nearly a decade, and while strides have been made toward protecting them, this critically important species still hovers on the brink of extinction. They need our help more than ever.

The Association of Zoos & Aquariums has just voted to include African vultures as one of their SAFE (Saving Animals From Extinction) projects, thereby creating an opportunity for more united conservation efforts. Currently, 12 zoos across the country are committed to partnering with African conservation organizations in order to address the African vulture extinction crisis. As part of this group, Cheyenne Mountain Zoo is helping to re-introduce African vultures to their wild habitat as one of our Quarters for Conservation legacy projects.

In addition, these birds have been part of our annual membership vote the past three years. We are proud to say that Cheyenne Mountain Zoo has donated nearly $67,000 to vulture conservation to date.

Africa currently has two species of vultures that are endangered and four species that are critically endangered. The main threats to African vultures are poisoning and power line collisions, says Jenyva Fox, lead animal keeper of African Rift Valley at CMZoo.

“Poisoning is a serious threat to vultures, which are nature’s clean-up crew,” said Fox. “Poisonings occur when farmers want to target larger predators like jackals and lions, so they lace meat with poison. Since vultures are very good at their job, they will clean up any carcasses they find – even the poisoned ones. Another newer issue is connected to elephant and rhino poaching. Poachers are lacing the elephant/ rhino carcasses with poison to target the vultures, so they do not give away the presence of a poached animal.” 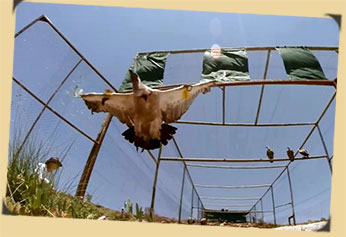 In 2017, Zoo members voted to fund the monitoring of 34 vultures that were released back into the African wild in order to learn more about the threats they face and help them be successful. The funds are also helping conservationists determine which power line locations cause the bulk of collisions. In turn, raised or rehabilitated vultures will be trained to avoid those lines before they are released back into the wild.

Unfortunately, Africa is not the only place where vultures are threatened by poison. In Asia, an estimated 40 million vultures have died due to an anti-inflammatory drug called Diclofenac, which is used to treat fever and inflammation in cattle. 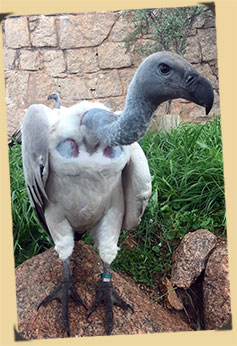 Because they scavenge for carcasses, vultures are often depicted as macabre or fatalistic symbols. But their role in the natural world is to help stop the spread of disease, and they are ideally suited for it.

“Vultures are nature’s clean-up crew,” said Fox. “Because they eat dead animals, they are thought to be dirty or gross birds. But they have a few adaptations and behaviors that help them stay clean, such as bald heads and necks to prevent bacteria from sticking. Some species of vulture will urinate on their own legs to kill bacteria from the carcasses they fed on, and vultures bathe regularly – both in the water and the sun. The UV rays from the sun kill the pathogens on their feathers after feeding.

“But the thing that I think makes them the most amazing is that they have very strong stomach acids that kill diseases and bacteria in the food they are eating,” said Fox. “This is why they don’t get sick like other scavengers could. Sadly, these acids are not able to overcome man-made poisons.”

Cheyenne Mountain Zoo is home to three Cape vultures and one Eurasian griffon vulture. Guests can see our Cape vultures in African Rift Valley and can learn more about vultures at our Wings of Africa Bird Show, held daily at 10 a.m. (weather permitting).