It’s hard to pinpoint the exact moment a story begins, but the end of the story could be near for Malaika [muh-LIE-kuh], a 36-year-old female African elephant. We think this story started for us about 17 years ago when the Cheyenne Mountain Zoo Board decided to build a facility especially for aging female elephants, but that doesn’t make anticipating a loss any easier. 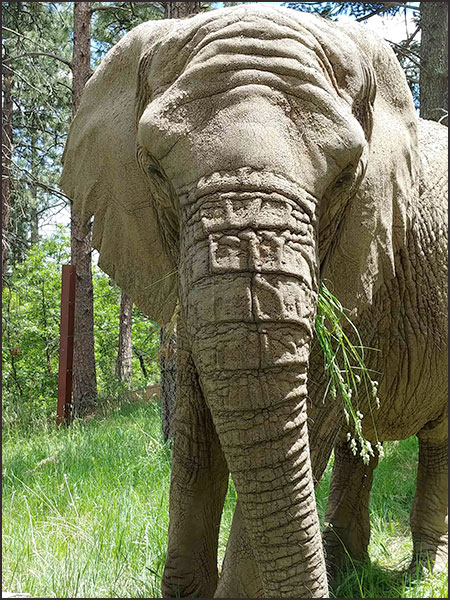 As humans, we deal with death from a young age. Our first experience may be with a beloved pet. At some point we all lose someone close to us. All loss is painful, but we know that some goodbyes are going to hurt especially bad.

This is true for our Zoo family, too. We know we are going to grieve deeply when it’s a certain animal’s time to go. Malaika is one of those animals. Combine an entire organization in various stages of grief with the logistics required for the sheer size of the animal we’re focusing on now, and you have an extremely complex and delicate situation.

Malaika has a history of health challenges, and has had far more good days than bad ones in her life. But, recently, she showed us signs that it might soon be her time to leave us, including worsening mobility issues and a fluctuating appetite.

After not eating regularly for a couple of days, Malaika’s appetite returned on Wednesday morning, when she ate, among other things, 11 blueberry bagels. Keepers said she seemed a little brighter.

By Wednesday evening, we were back to being more worried than ever for her. A couple of hours later, there was another light, when she ate again. Thursday morning, she ate and drank a little bit more. The situation is changing by the hour, and we are prepared for the worst while we reflect on her life and her mortality.

“Malaika loves people, and Malaika is easy to love,” said Annie Dinwiddie, senior elephant keeper. “She has social opportunities with the other elephants, but she usually chooses to be close to us keepers. It’s like she has adopted us as her own herd, and she’s really tuned into us.”

Malaika is a sensory elephant. She notices immediately if Dinwiddie is wearing a new lotion or used a different soap. She’ll give Dinwiddie a certain look, then she’ll slowly breathe in the new smell while looking at her keeper as if she has many questions about it.

“Malaika will hold out for the best training rewards possible,” said Jake Jachim, elephant keeper. “She loves training, but sometimes she’ll do the behavior we’ve asked for, and she’ll sense that she has a choice in how she’s being rewarded. I have seen her smell a reward in her keeper’s hand and completely bypass it for what was in their other hand. Like, ‘thanks, but I’ll take this instead.’”

Malaika, who came to CMZoo in 2008, loves to knock down trees and pick up giant logs to throw them across the yard. She also loves making noise. If you’ve been lucky enough to hear an elephant trumpeting during a visit, there’s a good chance it was Malaika.

Even while she’s not feeling well, her keeper team knows they can count on resilient Malaika to participate so they can care for her. Dinwiddie remembers after what could have been a life-threatening fall that Malaika took in 2019, she kept fighting. After working for hours to stand back up with her team’s help, Malaika was exhausted, but still allowed her keepers to give her oral medications.

With the support of her team and specialized equipment, Malaika has fought her way through two potentially fatal falls – once in 2018 and again in 2019. During her previous episodes, we held on tight to hope, as we do now. We were realistic that Malaika might not make it through those challenges, but nearly three years after her most recent rescue, she’s still here helping people fall in love with elephants.

It may sound morbid to some, but preparing for death is part of taking care of animals. It is part of what it means to be their forever caregivers. The team has been preparing for the inevitable death of an aging elephant since we built the facility in 2013 – and well before that, when the CMZoo Board decided to go down this road of caring for aging elephants. 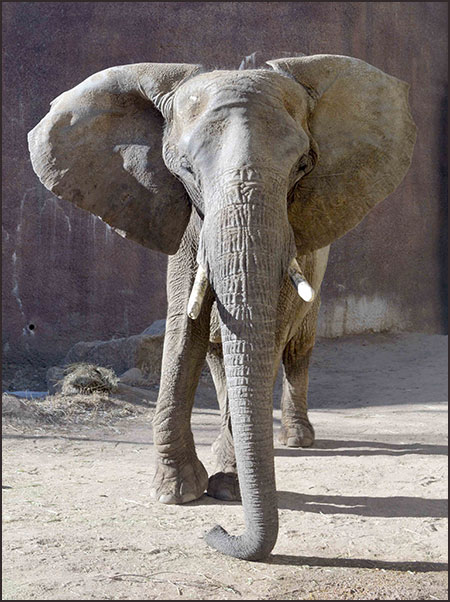 For now, Malaika’s future is uncertain, but her team is prepared to make the most compassionate decisions for her, empowered with the training and equipment we need to face whatever comes our way. We meet at 4:30 p.m. each afternoon to discuss what happens if there is a situation during the evening and who can get back and how fast. We consistently practice our emergency response protocols to lift an elephant that falls and can’t get up, or for a humane euthanasia decision.

While planning the design of the Wilgruen Elephant Center, the Zoo made a conscious decision to meet the demand for specialized staff and equipment to care for aging elephants, including a crane system in the barn. More than 20 cross-discipline Zoo staff members, including animal keepers, veterinary staff, and operations, maintenance and grounds personnel, team up for rescue lift efforts. Some specialize in rope work, others focus on operating the hoist, and others document the entire process so we can learn from it later. The Zoo also depends on Colorado Springs Fire Department’s Heavy Rescue Team for supplemental support. The Heavy Rescue Team receives on-site elephant rescue training in advance of an emergency, and they’re always on stand-by.

Our veterinary and animal care teams are working to keep Malaika as comfortable as possible. She is taking oral medications and receiving other treatments for discomfort. We also work closely with Colorado State University’s Veterinary Teaching Hospital to consider all treatment options for Malaika.

There are countless other Zoo professionals vital to an event like this. For example, we recently hired a career and life coach at the Zoo who provides on-site coaching support as our teams move through grief. When you care for as many animals as we do, loss is part of life.

We’re holding onto hope that Malaika will get through this, but we just don’t know what the next few days or weeks hold for her. If she does recover, it wouldn’t be the first time an aging animal has given us a scare and then lived happily for many more years. Still, we know it’s possible that it may soon be time to say goodbye to Malaika, if she takes another turn for the worse.

When the time comes, we have a beautiful final resting place in the mountains for her, thanks to a donor who has been planning with us for many years. For every foreseeable turn, there’s a plan in place for Malaika.

We’ll continue monitoring Malaika closely, during the day and overnight, and will keep you posted as we have any updates to share. Please join us in rooting for Malaika, and in celebrating the special ways this beautiful animal has touched your life and so many others.