Last year, Cheyenne Mountain Zoo joined the Rocky Mountain Wolf Action Fund (RMWAF) and other partners to collect signatures for a petition that successfully landed a proposition on this year’s general election ballot. Proposition #114 asks Colorado voters to decide if gray wolves, once native to the state, should be carefully reintroduced to the Western Slope. The plan, if approved, would be led by Colorado Parks and Wildlife with the support of other wolf and ecology experts.

“There are a lot of issues competing for voters’ attention this November,” said Dr. Liza Dadone, vice president of mission and programs at CMZoo, who led the Zoo’s efforts to support RMWAF’s campaign to bring this issue to voters in 2020. “We have seen significant support from the public throughout this project, but voters should know this isn’t a done deal. We still need people to look out for Prop #114 on the ballot and give the experts involved a chance to restore this amazing species that is vital to our local ecosystem.”

Other than noting that Prop #114 is an issue worth voting on, there are important dates to keep in mind for this year’s election. Ballots will be mailed to Colorado voters October 9 and must be returned by November 3, 2020 – when polls open for in-person voting.

While Prop #114 is a complex and controversial question, for CMZoo it’s a simple question: do we want to live in a state with wolves in the ecosystem or not? For us, the answer is yes, no matter how hard we need to work to collaborate with all involved parties to address the valid concerns on every side of the question.

“This vote is the best chance we have had at restoring wolves to the wilds of Colorado in a very long time,” said Dr. Dadone. “For the Zoo and the 15,298 registered voters whose signatures we collected last fall, we feel obligated to see this through. The initiative outlines the reintroduction of gray wolves to include ongoing collaboration from all stakeholders, and a solid plan from Colorado Parks and Wildlife incorporating research-based findings.”

CMZoo is home to a pack of seven Mexican wolves and has a long history of working to restore and relocate species in the wild, including black-footed ferrets, Wyoming toads, Mexican wolves, giraffe in Uganda, amphibians in Panama, and more. As an organization that contributes to the survival of species around the world, we see this is an exciting opportunity for Colorado residents to help restore a species that once roamed free, right here at home.

CMZoo’s role in this issue is as trusted wolf experts and animal advocates. One way we want to help is by addressing common misconceptions about wolves, based on our extensive experiences with them.

While many are excited about the chance to see wolves in the wild, popular culture has positioned wolves as dangerous and aggressive villains that could lead others to feel unsafe around them. Unlike mountain lions and other predators found in wild and populated areas throughout Colorado, a wolf’s natural reaction to human presence is to retreat.

“When Rocky Mountain Wild keepers go into the expansive enclosure with CMZoo’s pack of Mexican wolves to clean and replenish food, water and enrichment items, the wolves typically get as far away from them as possible,” said Rebecca Zwicker, Rocky Mountain Wild animal care manager. “We see it all the time. Their natural instinct is to be wary of humans. Even with our wolves in human care, we like to see that instinctual behavior intact, because the hope for our wolves is that they or their offspring are one day restored to the wild to support their dwindling wild population.”

The Rocky Mountain Wolf Project reports that since 1900, there have been only two possible cases of a wolf-related human fatality in North America, and no cases in the lower 48 states.

This is a complex issue, and we recognize this restoration could create hardships for some people who live in the region where they would be reintroduced, especially for farmers and ranchers in the regions proposed for reintroduction. As caretakers of animals, CMZoo understands that farmers and ranchers care for their animals and have invested generations of energy into them. We also know that both compensation for their livestock and mitigation strategies are essential if wolves are restored to Colorado. The health of public and private lands is critical for a healthy statewide ecosystem and its wildlife. We support a bill that helps us live in balance, uses management systems that support both of those standpoints, and puts experts in charge of the reintroduction who will hear all concerns and adequately address them as they meticulously implement the plan.

There is evidence of wolves’ positive impact on restoring balance in struggling ecosystems, too. Some may be familiar with the reintroduction of wolves to Yellowstone National Park, in 1995. The National Park’s elk population had grown to levels not healthy for the ecosystem, due to the absence of predators, like the wolf. The elk drastically reduced the number of trees and shrubs that prevent erosion and serve the rest of the ecosystem.

Birds lost their habitats, as a result of the fauna’s inability to grow to maturity. The water temperature in streams rose, due to a lack of shade from trees and shrubs, which made them uninhabitable for fish and other aquatic species. Without competition from wolves, coyote populations increased, which reduced the number of small mammals in the area that served as a food source for many smaller predators, like foxes.

Since reintroducing the wolf, Yellowstone National Park’s elk population has decreased and become healthier. The wolves single out the weak, old, sick and young elk, leaving the strongest elk to reproduce and carry on healthy genetic lines. The Rocky Mountain Wolf Project also says the wolves’ presence near waterways reduced the negative impact elk had on streams, trees and shrubs and the animals that live there, simply by redirecting the elk. Coyote numbers have decreased, creating a better balance and more available food sources for dwindling numbers of foxes,
badgers, weasels and raptors, which share their prey. 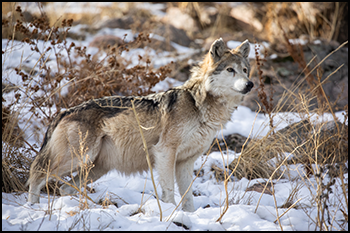 Until the 1940s, when wolves were eradicated from Colorado’s wild places, wolves thrived in the Rocky Mountain State. The last wolf was shot in 1945, as a result of an extermination campaign that didn’t consider the wolves’ important role in our delicate mountain ecosystem. Today, wolves roam the Rocky Mountains from Mexico to Canada and Alaska, but not in Colorado.

“Our state is one of the last gaps in connecting these wolf packs, which is detrimental to the long-term health of the species,” said Zwicker. “Colorado’s wild places can provide additional habitat for wolves and contribute to the safe and natural ‘wildway’ (like a highway) between subspecies of gray wolf.”

A wolf pack recently confirmed in Colorado may lead some people to believe that the species doesn’t need our support to thrive again naturally.

“Although one small pack of wolves has been located in northern Colorado, there’s no way those few remaining individuals could create a healthy, genetically diverse, sustainable population of wolves in Colorado,” said Zwicker. “Thinking about the greater goal of providing positive ecological benefits of a healthy and established ecosystem, these few wolves couldn’t have an adequate impact.”

As an apex predator, their presence at the top of the food chain in Colorado is vital, as it is in Yellowstone National Park. Western Colorado, where the Rocky Mountain Wolf Project seeks to reintroduce wolves, has more than 15 million acres of public land with an abundance of wild prey for hunters and wolves.

Returning wolves to our state in adequate numbers will surely impact Colorado’s big game species, such as elk, and there are concerns that this will negatively impact our hunting economy.

“When wolves have been removed from the ecosystem, populations of elk and deer can reach unhealthy numbers which can lead to disease spread, starvation and a devastating impact on plant life and waterways,” said Dr. Dadone. “To some, wolves will make hunts more challenging. For others, their presence will create memories that make the hunt live forever in their minds. When you think of how amazing it would be to see a wild wolf pack, we lean towards the latter.”

As with all election propositions, it’s important to think critically about how the return of wolves to Colorado could impact our state in positive ways and the potential obstacles we’ll need to creatively overcome as a statewide community.