Found in the heart of one of the most biologically diverse areas in all of Africa, okapi have only been widely documented in science since 1901. Threatened by habitat destruction, mining, poaching and civil unrest, there may be as few as 10,000 left in the wild. Okapi are only found in the rainforests of the Democratic Republic of Congo, where they are a national and cultural symbol and have been protected since 1933. 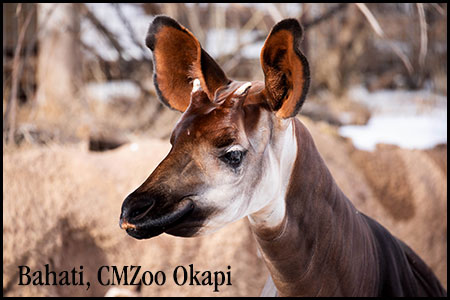 Okapi are often known as ‘unicorns of the forest,’ because of their unique markings and shy behaviors. If you’ve ever met 8-year-old male CMZoo okapi, Bahati, chances are you have fallen in love with him and his incredible species. Okapi are most closely related to giraffe, and – contrary to what their appearance might lead you to believe – are not a mix between a zebra and a donkey.

In 2020, CMZoo members voted, in the annual Member Conservation Vote, to support the Okapi Conservation Project’s (OCP) community outreach program to promote local education and to encourage co-existence between okapis, their habitat and local villages, with OCP’s agroforestry program.

“The agroforestry program helps residents near rainforests establish sustainable farming practices and reduce dependence on forest resources,” said Dr. Liza Dadone, CMZoo vice president of mission and programs. “By protecting the rainforests from slash-and-burn agriculture, OCP is protecting the okapi who need the rainforest to survive.”

OCP also introduced alternative crops and shared more efficient farming methods and technologies with local farmers. Over the last year, OCP has distributed over 65,000 kg of seedlings and over 62,000 kg of food seeds to more than 900 farmers in the region. As the program continues to grow, they are also taking the initiative to empower local women by supplying seedlings and support to over 400 female farmers.

“I love learning about the ways our frontline conservation partners, like OCP, find mutually beneficial projects for the success of the species they advocate for, and for the people who live near them,” said Dr. Dadone. “They’re so creative, and the positive ripple effect is amazing. Not only is there a safer habitat for okapi, thanks to OCP’s agroforestry program, but local families have more food security.” 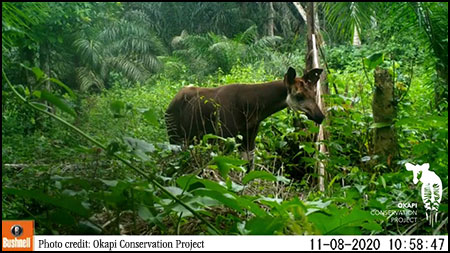 In addition to the success of local farmers, one farmer has reported he has a new well-received regular visitor – a wild male okapi. Thanks to the farmer, OCP has been able to track the okapi by getting regular updates and with nearby camera traps.

OCP says they are reimbursing the farmer for any loss of crops he is experiencing from the okapi, who enjoys nibbling on the farmer’s bean stalks. But, the farmer seems to be more focused on the excitement of providing a home for the country’s national animal. The wild okapi, who has been named Nembongo after the area where he is frequently seen, could become an ambassador for his species with local communities.