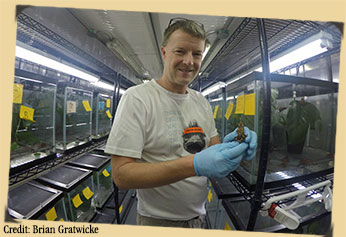 A nine-day trip to the jungles of Panama to help release hundreds of critically endangered frogs into the wild is just part of the job for Cheyenne Mountain Zoo veterinarian Dr. Eric Klaphake.

As part of the Panama Amphibian Rescue and Conservation project (PARC), the Zoo is actively involved in helping save dozens of species of Central American frogs and toads threatened by an infectious disease called chytrid fungus. Dr. Klaphake is part of the research team investigating the fungus’ impact while trying to preserve what remains of these species. There are currently 13 critically endangered frog species in human care at PARC, but the group is studying many more at risk.

The January release was composed of 500 Atelopus limosus frogs, also known as harlequin frogs or clown frogs due to their bright coloring. While not the first release of harlequin frogs by PARC, it was the largest. Like many release trials, it is uncertain how many may survive, as their resistance to chytrid is still in question. Also, determining perfect release sites for the frogs can be difficult. A site can appear good initially, but new issues can be revealed once it’s put into practice. However, it will provide the PARC researchers with valuable data.

“We will gain critical information for future releases, including understanding the challenges faced by a frog as it transitions from captivity into the wild,” said Dr. Klaphake.

Before being released, the frogs were injected with a harmless, under-the-skin fluorescent “tattoo” so they could be identified by black light upon recovery. In addition, a subgroup of about 30 frogs were outfitted with miniscule radio transmitters. The transmitters will provide valuable feedback, even though expense and limited battery life (approximately 21 days) limited the size of the subgroup. 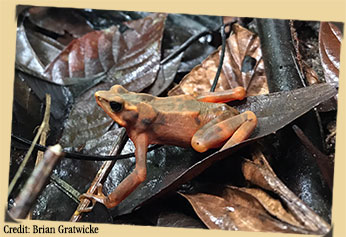 “The transmitters will help the consortium understand where the frogs go after release, including how they respond to weather, what type of vegetation/location they like to use, and their preferred basking temperature,” explains Dr. Klaphake. “They will also make it easier to find those frogs to confirm life/death, and, if dead, hopefully discover whether chytrid, predation, or other causes contributed to death to help us better guide future releases.”

The frogs were released near the Cobre mine in Panama’s Colon province. Cobre is one of the largest copper reserves in Panama and the mining company contributes generously to PARC.

“In addition, it’s well secured, so it was a location we knew would not be easily disturbed by outsiders,” said Dr. Klaphake.

While January is considered the dry season, the weather was abnormally cool and rainy during Dr. Klaphake’s visit. Traversing the site involved wading up a creek, traversing its steep, clay banks, and battling the dense jungle understory. Along the way, the team observed other frog species, giant millipedes, rats, and baby anole lizards. They were careful to give wide berth to the few venomous fer-de-lance snakes they encountered.

As a founding partner for PARC, Cheyenne Mountain Zoo has provided instrumental support to the project, including participation in field expeditions and surveys, development of education programs, and veterinary and husbandry support in Panama. Dr. Klaphake has visited the PARC project in Panama once before, while Cheyenne Mountain Zoo Conservation Coordinator Jeff Baughman travelled there last year to participate in a smaller release.

The project is considered significant due to the immediate, and not inconsequential, threat of losing multiple amphibian species forever. Frogs are considered an indicator animal, meaning if they were to go extinct in Central America, eventually the delicate balance of our ecosystem would be upset and we would start to see a ripple effect caused by their absence.

While researchers in the PARC consortium and around the world are investigating how to halt the spread of chytrid and/or increase amphibians’ immunity to the fungus, there are other important steps we can take in our everyday lives to help amphibians thrive.

“Remember, all water flows downstream, so being careful about what we dump into sewers, drains, and waterways is important,” notes Dr. Klaphake, adding “especially medications – they can concentrate and lead to many problems, including fertility issues in many aquatic species, even at very low levels.”

To learn more about the threat to Panama frogs, visit http://amphibianrescue.org. Panama Frog Conservation is one of the Cheyenne Mountain Zoo’s Quarters for Conservation projects, so you can also choose to support our work with PARC every time you visit the Zoo.