Next month, Cheyenne Mountain Zoo will move forward with revised plans to contribute to the Amur tiger Species Survival Plan. Since 9-year-old female Amur tiger, Savelii, arrived at CMZoo in November 2019 on a breeding recommendation, she has been settling in, getting to know her keepers, training for important husbandry behaviors, and participating in ‘howdies’ with Chewy, our 5-year-old male Amur tiger. 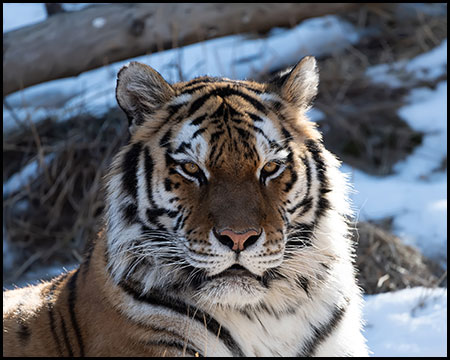 Howdies are opportunities for animals to see, smell and hear each other with a protective barrier in between them. If animals consistently show positive signs of interest in each other, the next step is to introduce them without a barrier for incrementally increasing periods of time. But, just because they’re genetically compatible doesn’t always mean they are compatible as individuals.

“We haven’t seen behaviors between Chewy and Savelii that encourage us to introduce them without barriers,” said Rebecca Zwicker, Asian Highlands animal care manager. “Big cat breeding can be risky, in the wild and in human care – even when animals have spent positive time together without barriers. We’ve decided to take advantage of the technology available to us so we can hopefully contribute to the tiger SSP without putting Chewy and Savelii into a potentially dangerous scenario together.”

In the coming weeks, CMZoo will welcome a team of reproductive specialists to help with collecting semen from Chewy and artificially inseminating Savelii. Historically, artificial insemination in tigers has been unsuccessful a majority of the time, but with new methods in place, the team has high hopes.

The team will inseminate Savelii in two different ways: traditionally, through transcervical insemination, and with a newer method by which the sperm is placed directly into Savelii’s oviducts. The hopefully fertilized eggs would then move into Savelii’s uterus, where cubs would develop over a three-and-a-half-month gestation period.

“The best chance for this to be successful is by using recently collected sperm, which is why we’re collecting from Chewy that same day,” said Dr. Jon Romano, head veterinarian at CMZoo. “We want to do everything we can to help bring Savelii’s valuable genetics into the population, so we’re potentially using a combination of three different samples: a frozen sample previously collected from Chewy, the sperm we collect from Chewy that day, and an additional frozen sample from other tigers genetically compatible with Savelii.”

Female tigers are induced ovulators, which means the act of mating has previously been the only way for the female to release an egg for fertilization. But, breakthroughs in reproductive science have shown that with the assistance of hormone therapy, artificial insemination has a higher margin of success than it used to.

Savelii has been taking hormones to modify her cycling. In the days before her procedure, she’ll participate in her own health care to get a series of voluntary injections that will stimulate her to ovulate.

The newer oviduct procedure is laparoscopic, meaning it involves small incisions which reduce recovery time and chances of infection, as opposed to more invasive surgeries. Still, any time an animal goes under anesthesia and has incisions, there are risks involved, so Savelii will stay inside her den for at least a week after her procedure. This time in her modified dens will allow keepers to closely monitor Savelii’s incision sites while she heals.

Savelii’s care team has been collecting baseline fecal samples that will help confirm whether or not Savelii is pregnant in the weeks following the procedure. In addition to comparing her baseline hormone levels in fecal samples to new fecal samples collected over the next several weeks, they’ll monitor behaviors, like nesting or mammary changes, which are common in tigers in the days leading up to birth.

“We don’t want to anesthetize Savelii if we don’t absolutely have to, so we’re relying on her rockstar training status to help us monitor in other ways, like voluntary x-rays, blood draws and checking for weight gain,” said Zwicker.

Ultrasounds on tigers are dangerous because of the contact staff would have to make with the tiger to get quality imaging, so there are no plans to attempt that.

There’s no exact timeline, but the team estimates if Savelii is pregnant, they would know by about two months into the three-and-a-half-month gestation. According to the Association of Zoos and Aquariums, Amur tigers have three cubs, on average. They have been known to have up to seven cubs, but sadly, not all of the cubs usually survive from larger litters. The mortality rate of tiger cubs is high, with only about half of them surviving to maturity.

Male tigers don’t typically play a role in the birth or in raising cubs, so Chewy and Savelii will continue to rotate access to their multiple indoor and outdoor spaces. If Savelii does have cubs, she and the youngsters will likely be in a space that doesn’t present the clumsy little ones with complicated obstacles, like the waterfall and pool in the main yard, until they get their bearings. Cubs are born with their eyes closed, so they are completely dependent on their mothers. They typically open their eyes between six and twelve days after birth.

Amur tigers, previously known as Siberian tigers, are endangered, with fewer than 500 individuals in the wild. The Association of Zoos and Aquariums’ Amur tiger Species Survival Plan (SSP) contributes to the success of an assurance population of animal ambassadors in human care that advocate for their wild relatives, and inspire people to support important conservation efforts. Some SSPs also contribute to wild populations, or could in the future.

“We’re excited about the opportunity we have to contribute to the survival of this incredible species,” said Zwicker. “These two are amazing animal ambassadors for their wild counterparts, with such outgoing personalities. We’re keeping our fingers crossed that all goes well in March, and we’ll be able to share little Saveliis and Chewys with the world soon.”